The swissQprint Nyala large format printer is Europe's best-selling printer in its class for the third time in a row, with the new LED model now having replaced its predecessor.

According to the Geneva-based market research institute Infosource, last year the swissQprint Nyala was Europe's best-selling printer model in its class: UV flatbed/hybrid printers >60" (152.4 cm) wide in the EUR 130,000 – 500,000 price segment, compared to all brands surveyed in 2017. This means that Nyala has taken first place for the third time in a row.

Modularity across the range
The current swissQprint range comprises three models with varying dimensions and productivity: Nyala LED (3.2×2 m flatbed, 206 m2/h maximum output), Impala LED (2.5×2 m flatbed, 180 m2/h maximum output) and Oryx LED (2.5×2 m flatbed, 65 m2/h maximum output). All feature modular design and a free choice of ink configurations, so users can get a printer configured according to their immediate needs while keeping the option of later conversion or expansion. Such a possibility for phased investment can make it easier to get started with digital printing and, as a result, the machine grows with the company. This modularity certainly contributes to success, both for Nyala and for swissQprint. 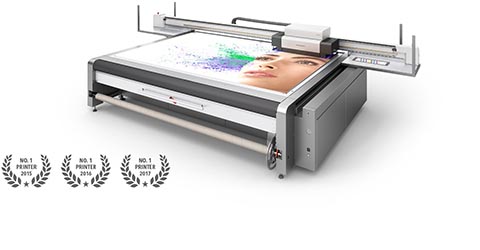