Noida – One of the biggest challenges that confront mankind is Hunger. To make matters worse, we live in a world less than perfect where one-third of the food produced for human consumption is wasted. Any narrative on sustainability will be an empty vocation till it does not focus on eliminating hunger. No wonder why Sustainable Development Goal No. 2 is a Clarion Call to Action by the United Nations for systemically ending hunger and achieving food security for all by 2030.

As a tangible and definitive contribution to this 2nd Sustainable Development Goal that was universally acclaimed along with 16 other goals in 2015, India’s largest multinational flexible packaging materials and solution company under the aegis of Mr. Ashok Chaturvedi has come up with Flexfresh that works on the principle of Active Modified Atmospheric Packaging (AMAP) Technology. Flexfresh is a special patented film made of proprietary polymeric composition that elongates the shelf life of highly perishable fresh produce like fruits, vegetables and flowers.

Flexfresh works in conjunction with Fast Respiration Meter and Laser Perforation system supplied by Perfotec B.V. of The Netherlands. While the respiration meter ascertains the respiration rate of the fresh produce, the laser system uses this information to adapt the permeability of the film with the help of perforation matrix.

In Flexfresh, equilibrium of oxygen and carbon dioxide is maintained at all times while restricting the humidity between 90-95% to avoid condensation. The effect of ethylene emitted by the produce is greatly reduced during ripening amidst high humidity. The bag exhibits good carbon dioxide release characteristics. Neither gas flushing nor compressed vacuum technique is used here. The amount of oxygen required by the product is the key point of the packaging. This is controlled by the perforation. The micro-perforation required is decided on the basis of Oxygen and Carbon Dioxide required inside the bag. Flexfresh is the first ever film for packing fresh produce that is bio-degradable by composting and complies with all international regulations for overall migration (EC 1935/2004), reach compliance (EC 1907/2006) and qualifies for biodegradation under DIN EN 13432 (2000-12).

Citing a few success stories, Mr. Siva Shankaran said, “A leading Dutch Bell Pepper exporter commenced shipping his produce to USA by sea containers in 2015. The exporter was happy with the arrival quality and exported over 300 containers from Holland to USA in 2017 after conducting successful trials by sea container earlier in 2015.

An Indian Pomegranate grower has been supplying its produce to Europe. Extensive trials were conducted during 2015 and in 2017 over 300+ containers of pomegranates were exported to Europe and other countries, to leading super markets with excellent quality upon arrival.

A prominent European Retail Chain conducted a litmus trial with Flexfresh bags by shipping Blueberries from South America to Europe. This journey usually takes more than 5 weeks by sea. The results have been MORE THAN ASTOUNDING! While the loose blueberries resulted in an average weight loss of 19.96%, those packed in Flexfresh had shed merely 0.76% weight after a period of 7 weeks, thus registering a phenomenal 96% reduction in weight loss upon arrival.

One of the recent successes with a major Banana exporter has borne significant benefits in extending the shelf life of the fruit in its green-phase; reduction in weight loss and ability to carry out ethylene treatment without opening the bag as is the convention thereby saving significant labour cost and ensuring better product delivery for the consumer. The solution provides total reduction of the supply chain costs as Banana is available for longer periods thereby ensuring both situations of being able to absorb sudden market demands and also reduce wastage as the holding period is now extended by 2-3 weeks before ethylene treatment.

These are just few of the very many success stories that we have had with Flexfresh- an out-an-out award winning packaging solution for fresh produce that has won top honours conferred by none other than Flexible Packaging Association among other bodies. For the benefits of the readers I am hereby presenting a matrix showing the shelf life extension that has been achieved through Flexfresh.”

Talking about Flexfresh Mr. Ashok Chaturvedi, Chairman & Managing Director, Uflex Limited said, “Research has proven beyond reasonable doubt that flexible packaging with features like re-closability, optimum barrier properties etc. aid in protecting food from being wasted. Flexfresh has stood the test of time extending shelf-life of highly perishable fresh produce and preventing associated wastage. By its very design Flexfresh is the first ever film for packing fresh produce that is bio-degradable by composting. Studies have also proven that the energy required for manufacturing flexible packaging is just about 10% of the total energy required in producing the food and getting it from the farm to table. Thus there is all merit in embracing flexible packaging for protecting food from being wasted. Through the echelons of a platform as prestigious as ANUGA FOODTEC, I would like to call upon the global fraternity to do all that it takes to prevent food wastage, promote sustainability and combat hunger. I invite you all at Hall 8, Booth F-035 from 20-23 March at ANUGA FOODTEC 2018 in Cologne, Germany as Flexfresh steps up the freshness and sustainability quotient of the event.” 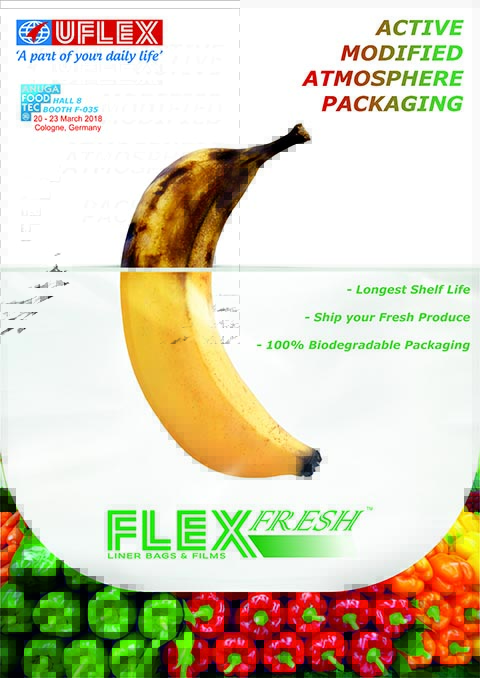