Würzburg – Koenig & Bauer has been named among the winners of this year’s iF Design Award and can thus point proudly to a world-renowned seal of design excellence. At the grand award ceremony on 9 March 2018, the RotaJET web press picked up the coveted trophy in the discipline “Product design”.

A jury of 63 international experts evaluated over 6,400 entries from 54 countries before selecting the prizewinners in seven disciplines. The RotaJET from Koenig & Bauer convinced the jury by reconciling perfect functionality with modern design language. The silver and grey colour scheme which characterizes the outward appearance is accentuated by a highly distinctive blue segment with a backlit company logo. Particular mention was also made of the uncluttered and ergonomic operating concept, which is immediately approachable to the user. “This award adds another element to our new brand image and is proof that we are on the right track”, said a delighted Dagmar Ringel, head of marketing and corporate communications of Koenig & Bauer.

For 65 years now, the iF Design Award has served as an internationally recognised label for outstanding design and is one of the world’s most important design awards. Each year, top design achievements are honoured in seven disciplines – product, packaging, communication and service design, architecture, interior architecture and professional concept. The awards are organized by the iF International Forum Design GmbH in Hannover, the oldest independent design institution in the world. This year’s prizewinners were celebrated by 2,000 guests from 36 countries at the iF Design Award Night which was held at BMW Welt in Munich.

All winning entries are presented in the iF World Design Guide and featured in the iF design app. An exhibition of the best submissions from the discipline “Product design” will be running from 21 June to 16 September 2018 in the HafenCity district of Hamburg. 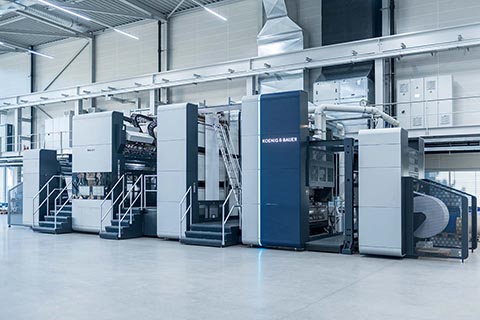 The RotaJET at the demonstration center of Koenig & Bauer in Würzburg.