West Caldwell, N.J. – Growing up in his grandfather’s letterpress shop, Brian Solov has learned a few things during his 30-plus years in the business. Now President of Boston area MicroPrint (www.mprint.com), he’s still learning. Since having a reconditioned Colter & Peterson 30-inch Polar paper cutter installed the first week of February, Solov’s purchase is producing better than expected productivity gains and other pleasant surprises.

“I worked with paper cutters in my younger days. That’s when I became a believer in Polar machines, but here I inherited two Challenge 305s,” recalled Solov, who joined MicroPrint as Production Manager in 1996 and became the company’s President in 2002.

“We cut material with the Challenge line for 12 hours a day and were battling paper draw, paper squareness and periodic cutter downtime issues. When one of the Challenge cutters began showing its age last year, I asked around and was referred to Colter & Peterson. I was looking for a reliable used Polar from a reputable dealer. A warranty was essential because repairs are costly and I wanted piece of mind. Bruce Peterson told me they had one available with a warranty and the difference was immediate. It’s like going from driving a Chevy to a BMW.”

MicroPrint is a 10,000 square-foot trade shop that produces work for print brokers, advertising agencies and design firms. Solov says his customers reside within a 30-mile radius of Waltham, MA, a western suburb of Boston, but the work is done for national clients and is shipped around the world.

“Every job is a deadline crisis,” he said, “but we are built to handle it with top-notch staff and equipment.”

MicroPrint also is an all-digital operation, with Xerox iGEN™ 150 and iGEN5 presses being joined by a pair of Oki Data Pro900dp envelope presses. To handle large format poster and signage work for tradeshows and business events, there are two HP Designjet 360 series and an Oc? Arizona GL UV Flatbed press. While the large format and envelope printing work holds its own, Solov says the on-demand and variable data category is driving business these days and why the Polar paper cutter was needed.

“The Polar simply cuts more and does it faster. It’s a huge advantage,” says Solov, who manages 20 employees. “The back gauge is twice the speed of the Challenge cutter it replaced. The Challenge had a 3-inch paper lift capacity and now we can load 4-1/2 inches of paper. The move from a hydraulic to a belt driven machine helps with the bigger lift of paper, too. And the ability to change clamp pressure is done with a simple twist of the knob that is saving us time. With the Challenge, we first had to open the machine doors and loosen the hydraulic screws to adjust the pressure, so we lost time with all the stopping and starting. No more.”

Solov says the Polar is more flexible for his complicated Direct Mail and postcard work, and a typical run length is usually between 500 and 25,000 pieces.

“Many postcards are 5-1/2 by 8-1/2 inches so we run them 4-up on a 12-by-18 inch sheet, all personalized. A 10,000 piece run would require us to RIP 10 files of 1000 records for the press, then cut the resulting 10 lifts of 250 press sheets on the Challenge,” he explained. “Now we RIP seven files of 1500 records for the press, then cut seven lifts of 375 press sheets. So we’ve increased our cutting output and only need to write seven instead of 10 variable data print files, which saves us time both upstream in pre-press and downstream in the bindery.”

Solov opted for larger, 29.5-by-29.5 inch side tables to help move and maneuver the sheets into place. Operating three shifts five days a week, his cutter operators are benefitting from that decision.

“Our bindery operators are very happy with the tables and especially with the intuitive computer program,” he said. “The Polar program is easy to scroll through and program jobs, plus the back gauge makes everything run faster.”

Even though it has only been one month since the Polar arrived, Solov is pleased with how Colter & Peterson supports its equipment.

“After it was installed we had a couple of slightly damaged parts, but I made a phone call and C&P sent a tech up from New Jersey and it was fixed. I could have bought a cheaper machine but having the warranty and technical support from C&P makes a huge difference. As our business continues to grow, when the time comes I’d be satisfied with calling Bruce and replacing my other Challenge with another Polar.” 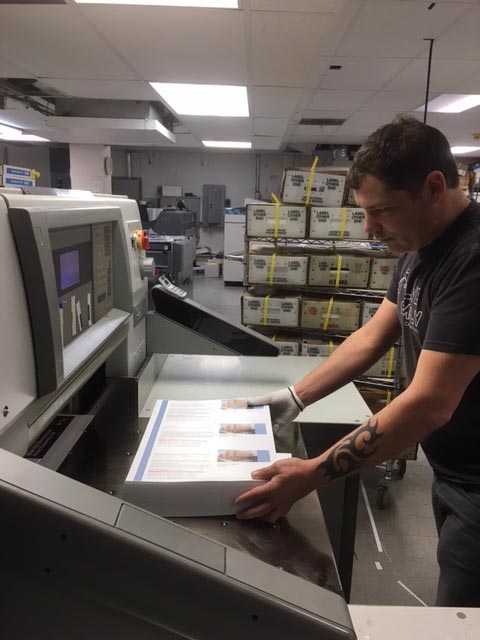 The Polar paper cutter has improved productivity at MicroPrint by increasing cutting output and saving time in pre-press and the bindery.