Würzburg – Koenig & Bauer received a coveted first prize for its personnel policy at an award ceremony held in Berlin on 20th February 2018. The Würzburg press manufacturer had submitted its new concept for a company pension to this year’s bAV Prize competition. The annual bAV Prize honours future-oriented corporate employee pension projects. In 2017, Koenig & Bauer converted its company pension scheme from a simple salary-dependent benefits system to a contribution-based system. “Our objective was to establish a uniform and fair pension concept with a modern scope of benefits for our employees,” explains Volker Schiele, head of personnel management at Koenig & Bauer.

The prize is sponsored by the Confederation of German Employers’ Associations (BDA), the Federation of German Industries (BDI) and the German Institute for Retirement Provisions (DIA). Guest speaker at the award ceremony was the former Federal Minister for Labour and Social Affairs, Walter Riester. Basic contributions to the new company pension are calculated according to a wage- or salary-group-dependent scale and are paid in full by the company. In addition, the employees are able make own contributions to the company pension and can in this way actively influence their later retirement provisions. “The company pension is thus more transparent and more interesting for the employees,” says Schiele. The new company pension model also serves to strengthen the ties of existing employees to Koenig & Bauer, while at the same time attracting new employees to the company. 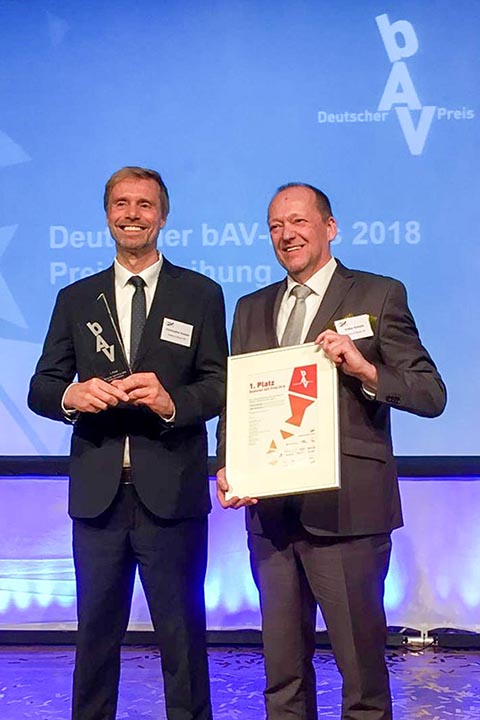 Every reason to be pleased: Christopher Kessler, head of legal affairs/insurance (left), and Volker Schiele, head of personnel management at Koenig & Bauer.