After more than 28 highly successful years as director of marketing and corporate communications at Koenig & Bauer AG, Klaus Schmidt (63) will be retiring from the company at the end of October. His duties will then pass to Dagmar Ringel, who was most recently director of public relations for technology group ZEISS. 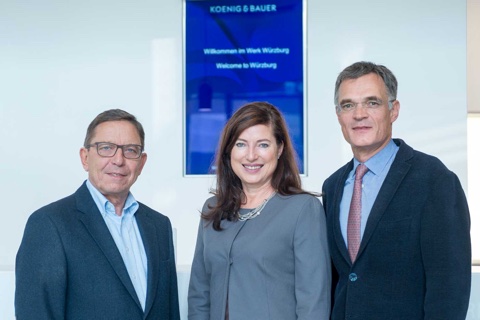 As longstanding director, Klaus Schmidt represented the managerial staff on the supervisory board of Koenig & Bauer AG from 1993 to 2016. He also served on behalf of the parent company on the supervisory and advisory boards of numerous German and international subsidiaries. Over the course of almost three decades, Klaus Schmidt has helped to shape the public and market image of the group with unwavering dedication, both in the press and at countless trade fairs and branch meetings. With his great knowledge of the industry, he was a sought-after partner for discussions throughout the company and beyond.

Dagmar Ringel has been appointed to succeed Klaus Schmidt as head of marketing and corporate communications for Koenig & Bauer AG. She can draw on more than 20 years of experience in corporate and marketing communications in internationally focussed companies such as hp and ZEISS.