RIVER FALLS, WI - AMS Spectral UV - A Baldwin Technology Company, the world’s number-one provider of offset LED-UV curing systems, will introduce the second edition of its LED-UV LookBook at the upcoming PRINT 17 exhibition, set for September 10 to 14 at McCormick Place in Chicago, IL.

Designed by award-winning agency Rosendahl of Berlin, Germany, it showcases the range of inks, coatings, effects and substrates that can be utilized when sheetfed lithography is cured with UV-LED, a relatively new method for “drying” inks and coatings as part of the printing process that is steadily gaining favor as its benefits and unique capabilities are realized by printers. The first edition of the notorious print piece made its debut at last year’s DRUPA, where it was among the most collected print samples at the show. 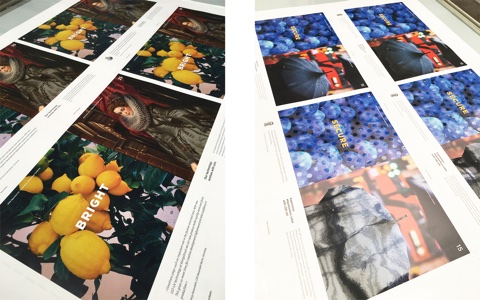 Titled “Make A Masterpiece,” the new LED-UV LookBook features public domain artwork from The National Gallery of Art in Washington, D.C. From photography through paintings, it showcases both famous and lesser-known works “reimagined” and enhanced by effects like neon ink, spot gloss, strike-through reticulation and metallic accents, printed on a unique array of substrates that vary from uncoated papers to clear plastics. Many of the effects are highly difficult to achieve without the use of LED-UV curing, and some have never been seen before.

“The LED-UV LookBook is a piece that shows printers the true capabilities of LED-UV printing, and how the expanded availability of inks and coatings paired with ‘instant’

curing has led to the development of some truly spectacular print effects that can be achieved on a variety of substrates,” explained AMS Spectral UV president Steve

Metcalf. “After the success of our first LookBook at DRUPA, we knew we had to continue producing the piece – so this year we took it to the next level, and created an even more in-depth work that truly shows how LED-UV curing can amplify designers’ artistic efforts while giving printers an edge that will secure them more customers.”

Version 2 of the LED-UV LookBook showcases a new printing technique developed by stalwart LED printer Konigsdruck of Berlin, which is referred to as LEDplus. Using AMS Spectral UV’s XP Series curing technology, which recently was awarded the InterTech Technology Award from Printing Industries of America, the process makes photographic images printed on uncoated papers as vibrant and colorful as those printed on coated stock would be, and shows the potential instant curing has for extending the artistic and creative potentials of printing.

The art piece also features an array of LED-cured pantone and neon ink effects, which provide stunning visual intrigue when used in tandem with the traditional CMYK process to add intrigue and “pop” to imagery.

Those wishing to pick up a copy of the LED-UV LookBook – Version 2 should visit AMS Spectral UV – A Baldwin Technology Company at PRINT 17 in booth #3007. Sheetfed offset printers interested in learning more about the piece can call (715) 425-5600 or email [email protected] for details about obtaining a copy.