At the end of November 2013 one of the print industry’s most active and successful user groups, waterless KBA Cortina newspaper press printers, met for the ninth time.

The workshop took place in Mülheim/Ruhr (Germany) at the headquarters of marks-3zet, the host of this Cortina user meeting. Marks-3zet is seen as one of the most important partners of the supply industry by many Cortina users. However, the Mülheim-based company is not just a sales partner for Toray waterless printing plates. The firm actively works on improving and developing waterless offset printing technology further in its waterless printing centre. Additionally, since 2012 marks-3zet has been a general contractor for pre-press solutions in newspaper houses, adding another string to its bow in this segment of the print industry. 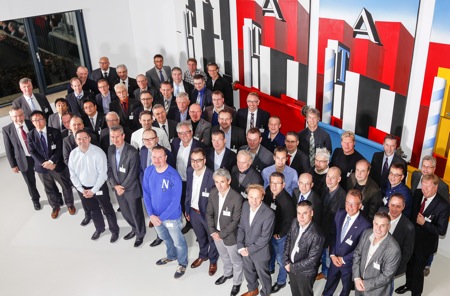 The Cortina users have formed a strong alliance which was reflected in the number of participants at the event: 15 companies – and thus almost all current Cortina print shops – were present in Mülheim. They are particularly delighted that two more newspaper houses in Trier (Germany) and Trondheim (Norway) recently chose to invest in environmentally friendly, waterless offset. This user group even has subgroups, one of which, the “Nordic Group”, was founded this year by Scandinavian Cortina printers. It serves as a way for users from Denmark, Sweden and Finland to intensively exchange experiences.

Some 60 print experts took part in the meeting as a raft of ink and paper manufacturers sent representatives to Mülheim to participate in sharing experiences from the pressroom as well as to answer the users’ various questions.

The workshop’s agenda included detailed material valuations by the “paper and ink” workgroup and the “error analysis/quality management” workgroup informed the participants of their results.

Cortina project manager Peter Benz together with his colleagues from KBA presented further technological developments as well as exemplary print projects from the circle of users. These products, some of which have been awarded prizes, strikingly demonstrate the high quality delivered by the Cortina in commercial printing.