ZOPI Q4/2022: The Price Spiral in Online Print Continues to Wind On 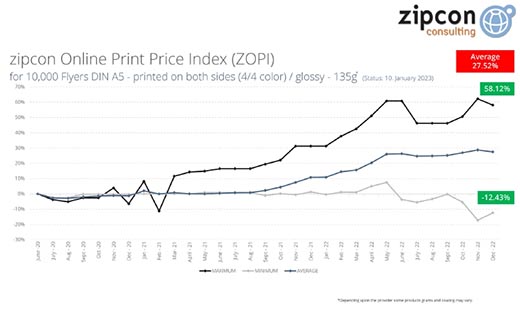 The ZOPI - Zipcon Onlineprint Price Index - shows the development of online print prices in the Flyer cluster up to the 4th quarter of 2022.

(Essen) After a brief breather, prices in online print picked up again in the fourth quarter of 2022. According to the current ZOPI – the Zipcon Online Print Price Index – in the fourth quarter of 2022, new highs were reached in November of last year, followed by only a slight decline in December. Looking at the details, however, there have also been downward outliers, at least for flyers.

Before 2023 really gets going, it is important to take another look at the past year with the latest ZOPI. While the Corona pandemic and the measures that accompanied it were scaled back step by step, the war in Ukraine shook the economy in Germany and around the world to its foundations – and will probably continue to do so in the new year.

Exploding energy prices in particular have dominated the discussion among private households and companies alike – and the last quarter of 2022 was no different. Over the year as a whole, energy products became 34.7% more expensive on average, as recently announced by the Federal Statistical Office. In 2021, energy was already 10.4% more expensive than in the previous year.

This is not leaving companies in the printing industry unscathed, as is regularly demonstrated by the economic telegram published by the Bundesverband Druck und Medien (German Printing and Media Industries Federation). Although the assessment of the business climate recently remained at the level of the previous month, the business situation itself was again assessed as worse. At the same time, companies were more positive about the new year.

But how did the online print shops fare in the fourth quarter of 2022? In general, now as in the past, companies that have transformed digitally at an early stage are more resilient to developments in the market and can adapt more quickly and flexibly. Nevertheless, they had to react to the increased prices of energy and raw materials just like everyone else. So what does that mean in concrete terms? The latest Zipcon Onlineprint Price Index demonstrates this.

After slight stagnation, the price spiral is once again moving upwards

At the end of September 2022, it still looked as if the prices for the print products surveyed in the ZOPI had reached their maximum, and even exceeded it. But what looked like the beginning of a plateau was, in retrospect, only a brief respite. As early as October, prices rose again for almost all suppliers included in the ZOPI, and even more so for the shopping basket than for flyers. However, first things first.

The Zipcon Online Print Price Index covers a total of nine suppliers in the flyer product group: Vistaprint, Wir-machen-Druck, Unitedprint/print24, Onlineprinters, Flyeralarm, Saxoprint, Onlinedrucken, Redprintgroup and sourc-e. All of them were asked to print 10,000 flyers in A5 format, printed in four colors on both sides and on 135g glossy paper. The average price increase for this order was still 25.17% at the end of September compared to the June 2020 index value – and then climbed again: In December, it was 2.35 percentage points higher at 27.52%.

Incidentally, higher variances from the starting value in June 2020 – and in both directions – had only occurred in the month before, namely in November 2022 and thus in the middle of the Christmas business. Here, the average price for 10,000 flyers was 28.77% above the index value, while the various suppliers ranged between the maximum of 62.27% (Unitedprint/print24) and the minimum of -17.25% (Vistaprint). Vistaprint stood almost completely alone last year with its policy of lowering prices significantly even from the June 2020 starting value. Only one supplier was also listed with a slight minus compared to the index value in January 2022, whereas Vistaprint has now been consistently charging a significantly lower price for the 10,000 flyers since June 2022 than it did two years earlier.

A similar trend to that for flyers can also be seen among the seven suppliers that ZOPI regularly records for the shopping cart: Wir-machen-druck, Unitedprint/print24, Onlineprinters, Flyeralarm, Saxoprint, Onlinedrucken and the Redprintgroup. In addition to the 10,000 flyers in A5 format, the shopping cart also includes brochures (32 pages, A4, stitched, printed on both sides) and business cards (4/4 color, without finishing).

After a slight stagnation in the third quarter, prices for the basket of goods also went up again in the fourth quarter: The average price rose from 26.60% in September to 33.46% in December. With a 56.46% increase in prices compared to the first survey of this product category in November 2020, Unitedprint/print24 also set the maximum value here. In September, this figure stood at 40.98%. The lowest increase among all suppliers was 21.37% in December 2022 and was set by Flyeralarm, which again lowered its prices slightly compared with September (26.54%).

Spread between minimum and maximum increases

A closer look at the figures reveals that November was also the most expensive month for customers in terms of the shopping basket, with an increase of 34.97%. However, with its 33.46%, December 2022 ranks directly behind it in second place.

However, the graph and figures only confirm what everyone – regardless of whether they are an entrepreneur or a private household – will associate with the year 2022: enormous price increases in all areas due to the Ukraine war. After all, energy is needed everywhere – companies in the printing industry and paper manufacturers are no exception, quite the contrary, they are particularly energy-intensive.

It is also noticeable that the spread between the lowest price adjustments and the highest, i.e. between the maximum value and the minimum value, has widened, particularly in the last quarter of the year. This is true both when looking at the flyers and when looking at the shopping cart. This indicates that the online printers are increasingly passing on the increased costs to customers to varying degrees. It should be exciting to continue to observe this development.

What the new year will bring

For the full year 2022, the Federal Statistical Office has just announced real growth in gross domestic product (GDP) of 1.9%. This was the first time that economic output had been above the figure for 2019. The feared recession has thus been averted for the time being, or rather the chances of Germany avoiding such a recession have increased. Nevertheless, concerns about this will continue to accompany business enterprises in 2023.

It is therefore important to remain vigilant in the coming months and to react quickly to developments. Experience in recent years has shown that companies that have already digitally transformed their business models and sales channels and automated their processes will be particularly successful in doing so. Of course, this is no guarantee of success. After all, even online print shops that are already at the forefront of digitization must not slacken their efforts to think ahead and address developments and future issues.

At the turn of the year, I already described on beyond-print.net what these might be and what I think print shops should be looking at. However, it would be best if we talked about this in detail live – for example at the Online Print Symposium 2023 on March 23 and 24 at the Munich Science Congress Center in Munich. Will I see you there?

With the Zipcon Online Print Price Index, or ZOPI for short, the Essen-based consulting company zipcon consulting has developed a trend barometer that for the first time takes a close look at price developments in the online print market. Two clusters were formed for this purpose: One looks at a standard order for 10,000 flyers in DIN A5 format, printed in four colors on both sides, on 135-gram paper, glossy. Nine online print shops were selected for the job: Vistaprint, Wir-machen-Druck, Unitedprint/print24, Onlineprinters, Flyeralarm, Saxoprint, Onlinedrucken, Redprintgroup and sourc-e. The second cluster focuses on a shopping cart that includes brochures and business cards in addition to flyers. This basket involves the following printing companies: Wir-machen-druck, Unitedprint/print24, Onlineprinters, Flyeralarm, Saxoprint, Onlinedrucken and Redprintgroup.

The prices are recorded on a weekly basis. On this basis, zipcon calculates the average values for each month and presents the percentage change compared to the index value. The index value for the flyer cluster is from June 2020, and the index value for the shopping basket is from November 2020. ZOPI thus reflects the changes in prices in online printing over the entire period up to the present day - and puts them in the context of developments on the market and in the economy as a whole in the subsequent evaluation. A detailed look at and interpretation of the figures is provided on a quarterly basis.