Somerville, Mass. – Fathom Optics (formerly Lumii, Inc), a software development company spun-off from MIT, has introduced a software platform that brings printed 3D and motion graphics to packaging without requiring specialty inks or substrates and without the need for additional materials, such as lenticulars or foils.

Fathom Optics’ algorithmic technology leverages existing press innovations to add depth, motion and chromatic effects to a wide range of print applications including prime labels, shrink sleeves and product authentication. The software platform fits into standard design and pre-press workflows. It is based on light field technology, originally developed for digital 3D displays, and currently works with offset and narrow and mid-web printing. The company also plans to expand to digital and other applications in the near future.

According to CEO Tom Baran, “We’re thrilled to be helping converters add revolutionary new capabilities to their offerings, using software algorithms and standard presses to bring motion to printed graphics. With the new platform we’ve released, we expect to bring new opportunities for creative expression and business growth to designers, brands and converters alike.”

Fathom’s platform was designed from the ground up to fit into existing packaging design and prepress workflows. Designers can apply effects to PDFs as they would with spot colors, either using the company’s design portal or its custom Adobe Illustrator plug-in. They can then visualize their creations interactively in 3D and share these 3D designs with collaborators.

Converters are provided with the tools that they need to take the PDF design and produce the 1-bit plate files that create Fathom motion effects when they run the job. Converters will be able to continue to use the color management and screening that they’re accustomed to, as Fathom effects integrate independently at the 1-bit level into existing plate files, after screening and distortion. Ready-made production recipes are provided for most labels, tags, and sleeves for flexo and offset.

Initial setup for converters is straightforward as well. Fathom provides a special 1-bit fingerprint pattern from which a converter makes plates. Once these are run on press, Fathom performs a mathematical characterization of the equipment, to optimize Fathom effects to work at the high speeds and under the existing registration tolerances required for the application.

Fathom effects can offer a very economical solution for eye-catching embellishments, especially when there is a significant volume of labels being printed. Baran concludes, “Fathom effects can be run at full speed so using Fathom as a foil replacement can remove associated hot and cold foiling costs, and allow jobs to run more quickly and more economically - a twofold benefit to converters.”

For more information on Fathom Optics, and to learn about the company’s “Early Adopter Program” visit fathomoptics.com. 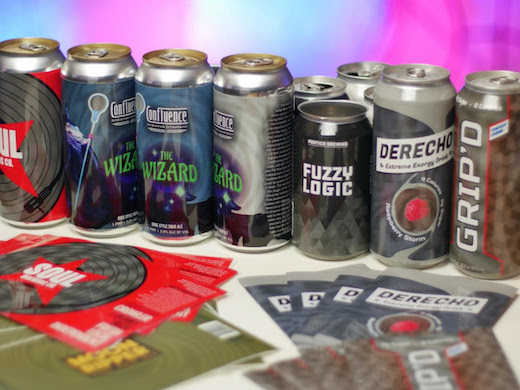