As in many industries, the Covid-19 pandemic, which is worsening again in most countries over the past few weeks, has left clear traces on the course of business in the Koenig & Bauer group. In Q3, order intake was down 13.8% at €232.6m and revenue was down 32.2% at €198.1m year-on-year. In addition to the effects of the pandemic, this revenue decline was materially due to the new internal revenue recognition guideline of the Koenig & Bauer AG, which caused a once-only revenue shift of €52.5m to 2021 in the Sheetfed segment. In the first three quarters of 2020, new orders of €712.8m were below the previous year’s figure of €843m by 15.4%, although this was better than the general sector figures for printing presses published by industry association VDMA, which dropped by 26.8% in the same period. Cumulative revenue came to €602.6m in the first nine months of 2020 (2019: €798.2m)..

At the end of September, management and supervisory board decided the Performance 2024 programme, which had been enhanced and expanded over the last few months, to strengthen Koenig & Bauer’s position as leading supplier in packaging, industrial, security printing and postpress as well as to increase the group’s operating profitability. The one-off costs required for the comprehensive package of measures were expensed in Q3 by recognising a provision of €57.6m. In addition, the new revenue recognition guideline mentioned above had a negative effect of €6.3m on EBIT. A positive effect arose from the one-off income of €4.8m from the sale of a real estate asset in Frankenthal. On balance, an EBIT of –€61.3m is reported for Q3. However, EBIT adjusted for one-offs improved substantially from –€34.9m in Q1 and –€10.2m in Q2 to –€2.2m in Q3. Despite the lower effects from short-time working compared with Q2, the adjusted EBIT almost reached the break-even threshold in Q3. In cumulative terms, EBIT for the first three quarters of 2020 came to –€102.2m (2019: €5.2m), group net earnings to –€109m (2019: €1m) and earnings per share to –€6.62 (2019: €0.05).

At €20.8m and €26.9m, respectively, cash flows from operating activities and free cash flowwere in distinctly positive territory in Q3, improving significantly over the same quarter of the previous year (–€27.7m and –€39m, respectively). Despite a higher increase in inventories, this positive performance was underpinned by lower receivables and other assets as well as higher customer prepayments. 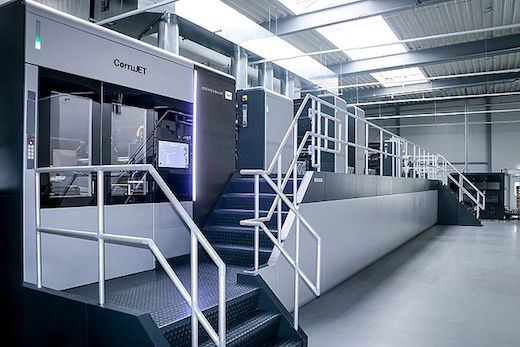 In addition to new developments for security printing, investments in direct corrugated board and digital printing as well as the joint venture with the Durst Group are being advanced as part of the Performance 2024 programme

Driven by sales successes with RotaJET presses and HP machines, the Digital & Web segment achieved encouraging order intake of €34.1m in Q3 (Q3 2019: €18.1m). Order intake in the first three quarters came to €90.8m, down from €108m in the previous year, due to lower orders in the web offset press business and for flexible packaging printing. At €36m in Q3 and €87.6m in the first nine months, revenue was below the previous year’s figures of €40.9m and €105.4m, respectively, for pandemic-related reasons. The order backlog contracted from €88.4m to €69.3m. EBIT, which was primarily burdened by the provision for the Performance 2024 programme, came to –€9.2m in Q3 and –€21.3m in the first three quarters (previous year: –€4.3m and –€15.1m, respectively).

President and CEO Claus Bolza-Schünemann: “In addition to boosting efficiency and scaling the group to the moderate growth expected in the next few years to group revenue of around €1.3bn after the completion of the four-year programme, it aims to strengthen our competitiveness in the long term. By continuing and accelerating all innovation processes, product and process developments, annual cost savings of over €100m should increasingly be achieved until 2024. After implementing the approved cost and structural adjustments, we are still aiming for a return on sales (based on EBIT) of at least 7% in the medium-term. In Q4 2020, the worsening international course of the Covid-19 pandemic is expected to have a negative impact on business performance. For the financial year 2020, we expect group revenue to reach a figure of between €900m and €950m and a negative EBIT before special items in the mid double-digit million range.“

Figures at a glance