The loyalty of the Beiersdorf company as a customer plays a special role in the history of metal decorating and is closely linked with the very roots of Koenig & Bauer MetalPrint. LTG Lufttechnische GmbH, a specialist supplier of industrial air conditioning systems, entered the metal decorating market with the first continuous drying oven for metal sheets in 1932. The newly designed oven was an absolute innovation and was paired with a metal decorating press from the Mailänder company which printed the distinctive blue Nivea Creme tins. The first metal decorating line was born. In the past, the sheets had been transported to a batch dryer and then unloaded again by hand, but now they could be conveyed to the oven automatically, carried through the thermal drying process by way of a chain drive and subsequently unloaded automatically.

A letter of recommendation dating from 1937 proves just how much Beiersdorf appreciated the LTG oven. Quote: “We are very satisfied with the drying oven for metal sheets supplied by your company. The best proof of this was our decision to follow the installation of the first oven with an order for two more.”

The two companies – Mailänder and LTG – worked together for many decades and installed hundreds of metal decorating lines worldwide until Mailänder was bought up by LTG in 1994. In 2006, LTG Mailänder was acquired by the Koenig & Bauer Group, and integrated into the company which today operates as Koenig & Bauer MetalPrint. 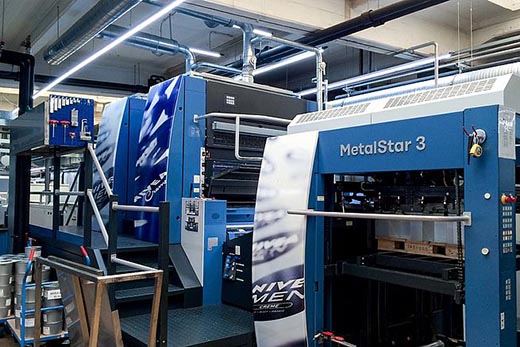 Beiersdorf has remained loyal to the machines of Koenig & Bauer to this day. And the famous Nivea Creme tins are still produced on one of our presses – albeit now on an ultramodern high-performance MetalStar 3 decorating line which was installed at the beginning of the year. In place of a thermal drying oven, the metal sheets are today cured with a UV system. Modern features accelerate makeready and enhance productivity. For example, the MetalStar 3 incorporates fully automatic plate changing. With CleanTronic Synchro the blankets and impression cylinders can be washed at the same time, or the blankets can be washed using two washing beams. CleanTronic SRW permits simultaneous washing of the ink rollers, blankets and impression cylinders. The time required for the washing process is thus significantly shorter.