Journey from his birthplace in northern England to Dallas

Dallas, Tex. – It was an especially proud day for the Koenig & Bauer family in America as it celebrated its Director of Technology, Chris Travis, on becoming a U.S. citizen. Travis was sworn in during a naturalization ceremony on September 4 in Dallas. With his right hand raised and a U.S. flag in his left, Travis had the Oath of Allegiance administered and became an official American citizen.

“Ever since I came to this country nearly 20 years ago, I’ve wanted to become a citizen,” says Travis. "America is an amazing place to live; I love its geography, the people are so friendly, and it’s given me many enormous opportunities, especially at Koenig & Bauer. It truly is a place to live your dream. My position has taken me all over the world, but my home is the United States. I truly love what I do and thoroughly enjoy working directly with customers in the U.S., Canada, and around the globe ”

Since he joined Koenig & Bauer in 2005, Travis has grown to become an integral part of the company and a leading authority within the industry. As Director of Technology, he has an in-depth knowledge of the printing process, especially his technological expertise, which allows him to work closely with customers, providing them with solutions, growth opportunities, and a long term vision. He is often called upon to speak at various industry events where he provides up-to-date information on topics including new printing processes, applications and upcoming industry trends. More recently, he has begun to host a series of technological videos from Koenig & Bauer. 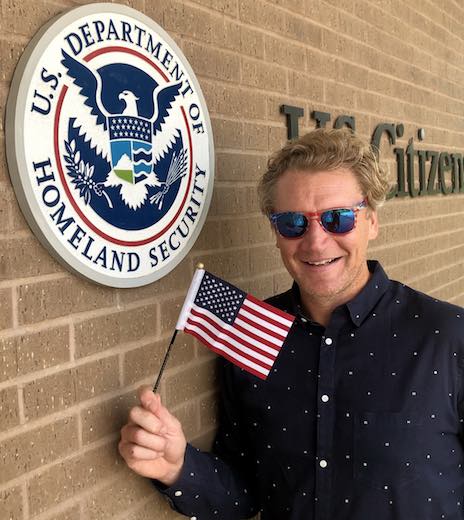 Chris Travis became a U.S. citizen at a naturalization ceremony in Dallas on Sept. 4.