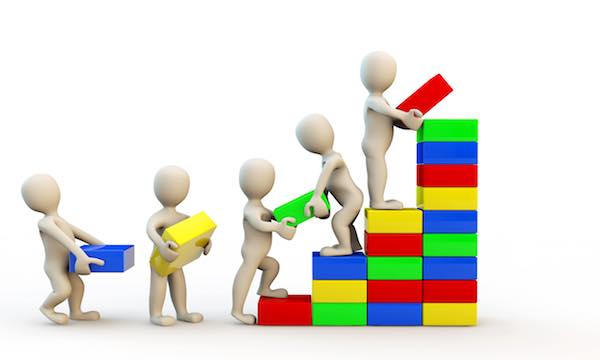 Three out of every four transactions in the commercial printing business are structured as a “tuck-in.” The buyer folds the acquired customers into their existing production capacity, hires selected qualified employees, with special focus on those people that touch the customer, and maybe cherry-picks some of the equipment. The seller is left to close up shop, sell off the remaining equipment and wind down the business entity.

What about the one out of four transactions that is not a tuck-in? Is another trend emerging in the consolidating commercial printing segment?

Fuse was the mini roll-up comprised of the former Kelmscott Communications, Rider Dickerson, and Buhl Press. The three companies were mashed together in 2016 with reported combined revenues of $40 million. As is the case with 75% of all acquisitions in the commercial printing business, the driving logic behind the creation of Fuse was the consolidation of the operations of all three companies. After a build-out of the Buhl Press facility in Berkeley, Ill., the other two production facilities were shuttered and the business “tucked-in” under one roof. The Fuse roll-up rolled onward in 2018 with the acquisition of Digital Hub, but then stalled. Now Fuse has itself become the acquisition target of the much larger Mittera.

However, the Fuse deal is different than the great majority of acquisitions that we list in The Target Report in the commercial printing segment in which the acquired facility is closed. In this case, Mittera has announced plans to continue operating in the Fuse facility. According to the new president of the Fuse business, now rebadged Mittera Chicago, the company is committed to “grow our Chicagoland presence,” indicating that the acquisition of Fuse will not be another closure and tuck-in. Rather, the deal represents a regional expansion of Mittera’s production footprint

In what turned out to be fortuitous timing for Dual Print & Mail, Knepper Press had earlier this year acquired TBN, the commercial printing business of The Buffalo News. The acquisition of TBN was a strategic move to reach into the Buffalo, New York region. (See The Target Report: April 2019, Commercial Printing and Convergence of Diversified Services.) Operating from its secure position in the Pittsburgh market, Knepper’s next step was to acquire a production facility in the upstate New York region to support and augment the newly acquired TBN business. The acquisition of Dual Print & Mail cements the regional expansion strategy and brings a second fully equipped web and sheetfed offset facility under Knepper’s ownership and management.

Knepper Press and Dual Print & Mail will continue to operate as separate standalone facilities, sharing resources and seeking to achieve increased efficiencies across a multi-plant production platform. Unlike Mittera, Knepper’s plan does not appear to be part of a larger roll-up strategy; rather, the acquisition was a strategic expansion into another metropolitan region that is within a reasonable driving distance from the company’s core market. But, at least in one respect, Knepper’s purchase of Dual Print & Mail is similar to the Mittera acquisition of Fuse; unlike the majority of deals in commercial printing, the plants in these two cases will continue to operate.

A similar expansion strategy has been methodically executed by Drummond, a commercial printing and graphic services company headquartered in Jacksonville, Fla. Through a series of acquisitions, beginning in 2012, Drummond has built out a considerable commercial printing presence in the greater Atlanta, Ga., metropolitan area. While some of the Drummond acquisitions have been consolidated into a unified production platform via classic “tuck-in” transactions, the company has clearly committed to building a permanent presence in the Atlanta market while maintaining their original Florida operation. Most recently, Drummond acquired PSP Retail with 90,000 square feet of production space in Decatur, Ga. The acquired company produces in-store graphics and signage. According to the CEO of Drummond, the acquisition resulted in “two complementary operations” in the Atlanta market. There was no mention of a tuck-in of acquired operations into one of the company’s existing facilities.

Mittera, Knepper, and Drummond represent a sub-trend within the larger market for commercial printing companies. Each has established a strong core geographic base (e.g. Des Moines, Pittsburgh, Jacksonville) and is growing strategically by establishing a stake in a new region and then building out from there with additional acquisitions (or in the case with Mittera, acquiring former consolidators).

However, we do not expect the basic underlying dynamic in the commercial printing segment to change. Demand for commercial printing services is predicted to decline, albeit at a rate that is less drastic than in the past decade. That decline will drive more consolidation. These market conditions mean that in all likelihood three out of every four transactions will continue to be “tuck-ins” in which the acquired business is closed, and customers and key employees are transitioned to the acquirer’s existing production facility. Nonetheless, we note that another trend is emerging in which financially healthy and operationally efficient regional companies leapfrog to an adjacent metro market and build out an additional geographic market position via a series of strategically sound acquisitions.

H.I.G. Capital is on a tear, making significant investments in print-centric companies, and now is invested across the printing industry, from digital to display to direct mail. 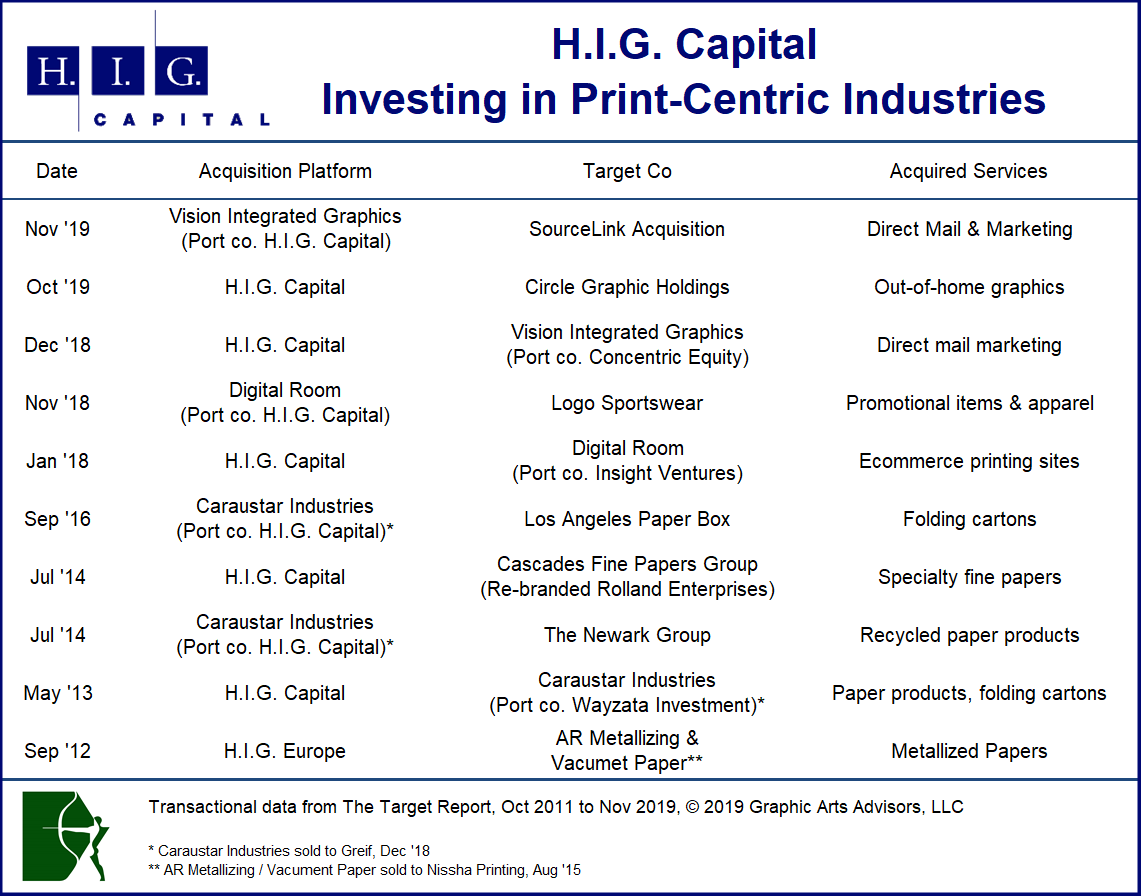 While both Vision Integrated Graphics and SourceLink Acquisition are prodigious producers of direct mail and other print-centric graphic communications, the sizzle is in the data-analytics, predictive modeling, creative services and multi-channel execution that drives higher response rates. Layered on top of, and obscuring the company’s core print production, SourceLink touts its  digital team and non-print services including SEO, paid search, social media, digital media, design, and video production.

Despite the dominance of digital marketing services in the customer-facing messages from Vision and SourceLink, it’s clear from the roster of H.I.G. acquisitions over the past several years that this global private equity powerhouse believes in the future of print.

* Graphic Arts Advisors, publisher of The Target Report, served as exclusive advisors to Dual Print & Mail in this transaction. 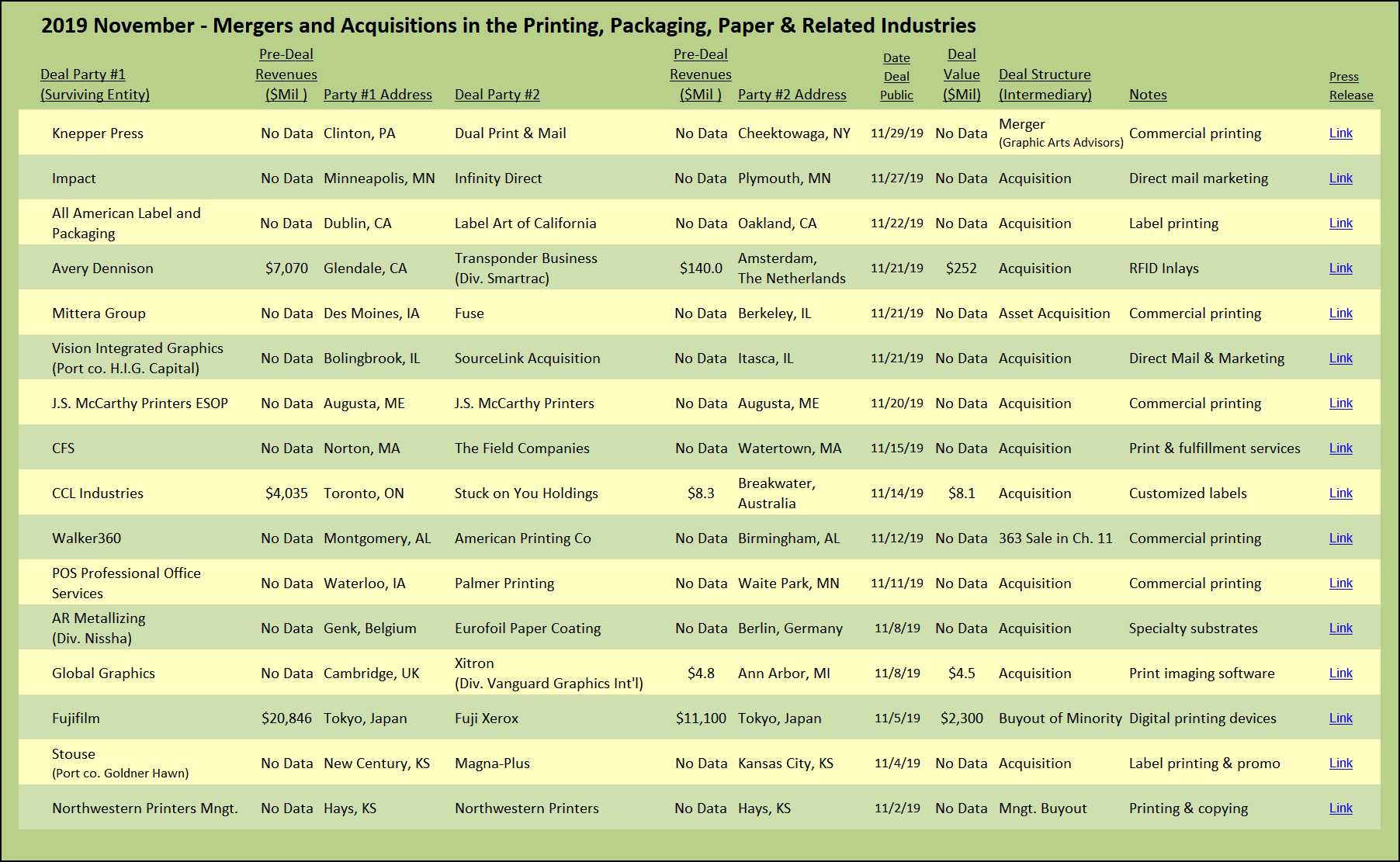 I suspect that consolidation will continue to dominate as the synergism available from plants in multiple locations is limited compared to that realized by consolidation of multiple facilities in a single location. More interesting might be remote sales offices to serve more distant markets.