Thomson-Shore under the Gavel, Salem One and Envision3 Acquire Mailing Services, and more… 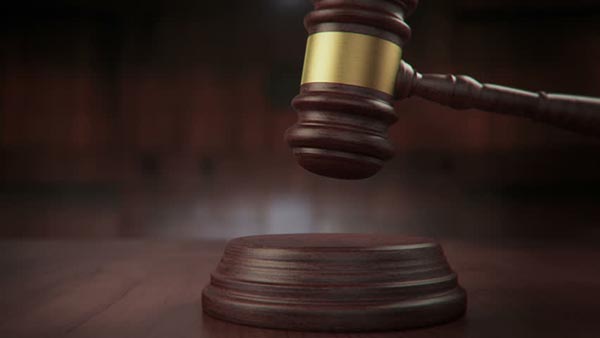 The news broke on March 25 that boutique book printing and manufacturing company Thomson-Shore had filed that day for protection under Chapter 11 of the US Bankruptcy Code. It quickly became apparent that this was not going to be a free-fall bankruptcy in which the company hobbles on for months or years, haggling with creditors to put together a plan to trim debt, reorganize the company, and emerge from bankruptcy with a cleaned-up balance sheet. Instead, the game plan called for a quick sale of assets under the supervision of the Bankruptcy Court, the dismissal of all the employees followed by an immediate resumption of operations, albeit limited, under the management of a new owner.

In a well-coordinated sequence of filings in the Bankruptcy Court, Thomson-Shore revealed that a sale of essentially all of its assets was already well underway with a preferred buyer. In what’s known as a “363 Sale” (based on the section of the U.S. Bankruptcy Code that permits the sale of assets free-and-clear of past claims and liens in a bankruptcy proceeding), Thomson-Shore has designated the CJK Group as its “stalking horse” bidder, the company it had selected to be in the preferred starting position in the 363 Sale process. With a clear headstart and advance planning, CJK is the company most likely to win the race to acquire Thomson-Shore’s assets.

Book printing industry consolidator CJK Group had solidified its position in advance of the bankruptcy filing by lending $760,000 to Thomson-Shore on March 1 as a pre-petition secured loan. That loan likely extended the life of Thomson-Shore and afforded CJK the time needed to develop a solid plan to buy the company on its own terms. To further support the company as it works though the bankruptcy process, CJK also provided $500,000 of DIP financing to Thomson-Shore within days of the bankruptcy filing (DIP stands for Debtor-in-Possession; a DIP loan is a form of financing afforded administrative superpriority over other claims in bankruptcy). As a secured lender and now also the DIP lender, CJK is in the position to include the face value of its secured loans as a “credit bid” included in the final price paid for the Thomson-Shore assets. In other words, CJK has already made a significant down payment towards its plan to purchase the Michigan book printer.

The only hiccup for CJK might be that a bidder emerges to top the $8.25 million price tag spelled out in the court filings and that a bidding war develops. The bidding procedures approved by the bankruptcy court require each bid to exceed the prior highest price in increments of $100K, which could quickly escalate the final price. In the event that CJK gets outbid, at least it will walk away with payment of its secured loans plus a $265K breakup fee that is in addition to the price paid for Thomson-Shore, small consolation for the risk taken and work invested, and a possible deterrent to other bidders.

With the deadline for competing bids set for the end of April, the Bankruptcy Court is scheduled to enter a final order of sale on May 1. Let the race begin. 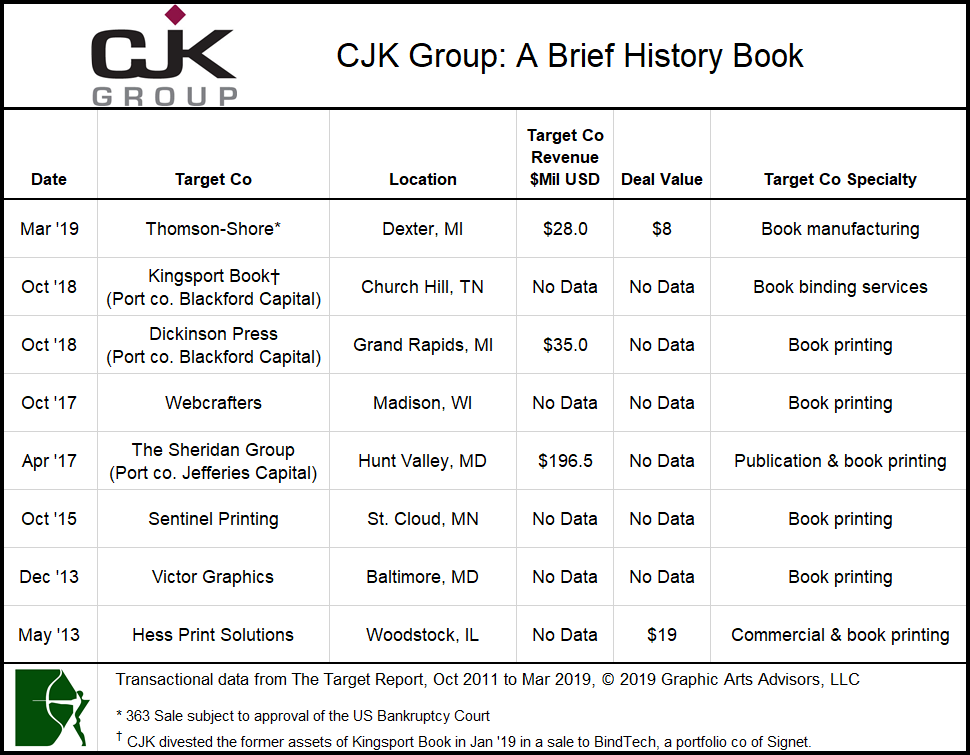 Salem One, a diversified printing and graphic services company in Winston-Salem, N.C., acquired Postmark. The purchased company, described as a “full-service direct marketing company,” clearly has its roots in the lettershop business, offering postal presorting, addressing, inserting, and data hygiene services, with a smattering of upstream design and marketing services.

Envision3, a commercial printing company in the Chicagoland region with its roots firmly planted in offset printing, has continued to diversify with the acquisition of Direct Mail Solutions.* Envision3 offered mailing services before acquiring DMS; however, the acquisition provided the company with additional staff with extensive experience in mailing, as well as a customer base with a need for mailing services.

IBS Direct, a direct mail printer located in King of Prussia,†Pa., announced its merger with ClientLink, a mailing services and fulfillment provider also based in the suburbs of Philadelphia. The two companies are both recent acquisitions of Logan Marketing Group and are currently being rebranded under the moniker “Intellus.”

These acquisitions, as well as other similar deals, reflect a growing industry trend toward firms providing a full roster of services rather than focusing on one or two capabilities. As more and more printers add mailing services, and mailing service providers add digital printing capabilities, a convergence is occurring. We expect this trend to continue.

Consolidation within the generalized commercial printing industry continued unabated. John Roberts Company, a diversified graphics services company in Minneapolis offering web and sheetfed printing, as well as mailing and fulfillment services, made a geographic leap with the acquisition of the assets of HM Graphics in Milwaukee. The buyer announced plans to keep the acquired facility operating, retaining many of the employees. With the acquisition, the John Roberts Company transitions to become a multi-plant player with the bonus addition of significant wide-format printing expertise.

* Graphic Arts Advisors, publisher of The Target Report, served as exclusive advisors to Direct Mail Solutions in this transaction.

† Graphic Arts Advisors, publisher of The Target Report, served as exclusive advisors to CL Graphics, one of the companies that was acquired by and is now part of Integrated Print & Graphics.

‡ Graphic Arts Advisors, publisher of The Target Report, served as exclusive advisors to Maestro Media Print Solutions, one of the companies that was acquired by and is now part of IBS Direct. 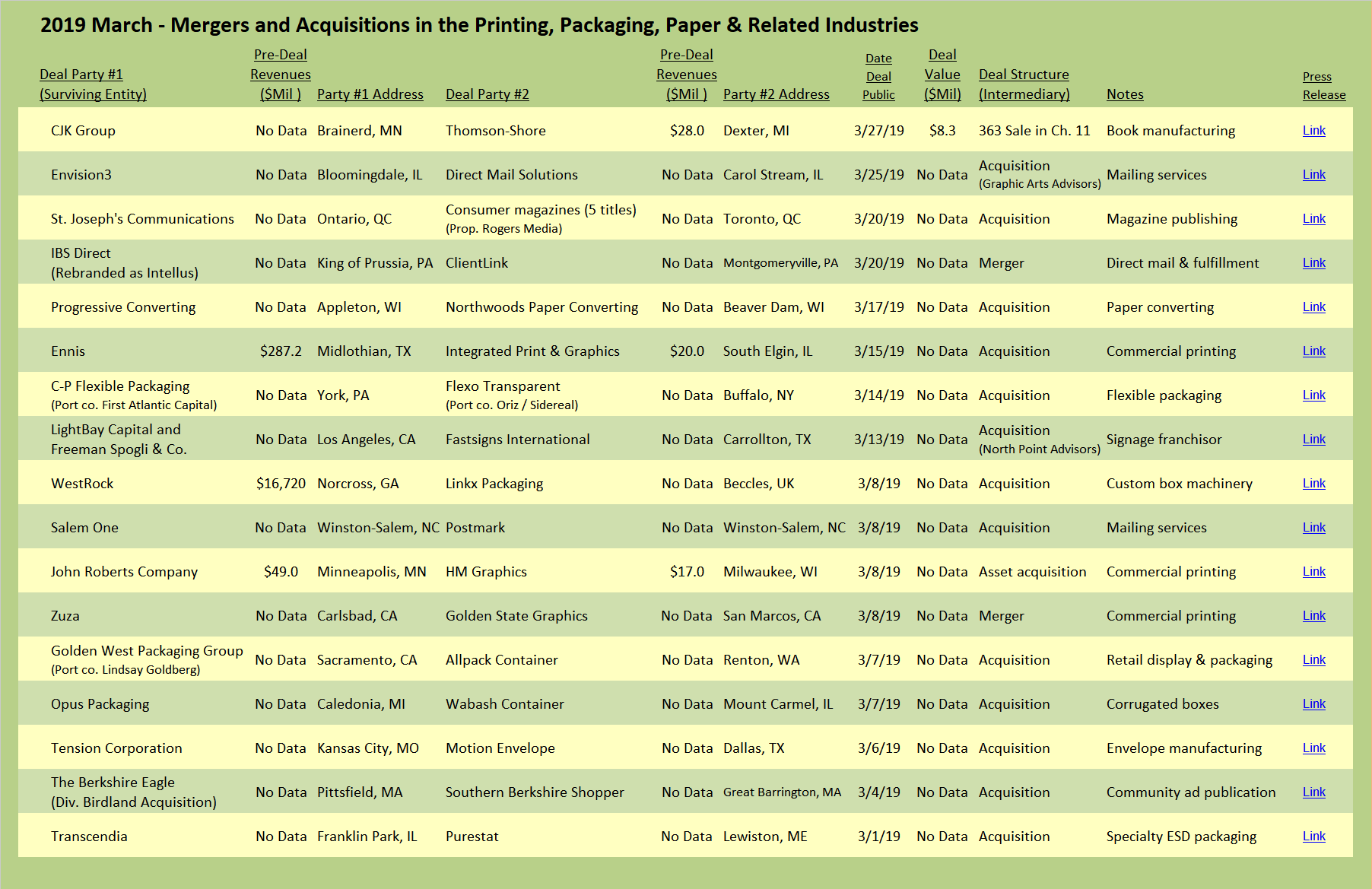