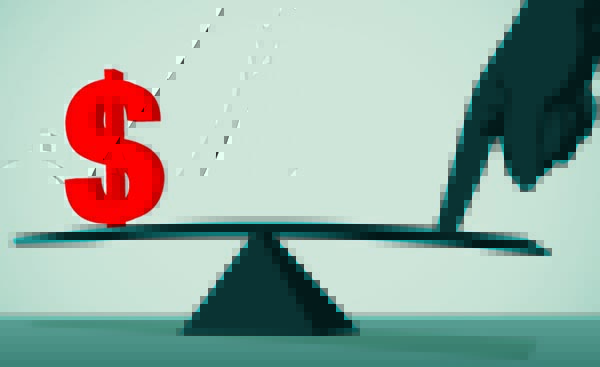 The past two decades have been a turbulent time for the paper industry in the U.S. and Canada, as producers closed mills in a frantic race to catch up with the downward demand for the printing grades of paper, from newsprint to high-end fine coated papers. The weaker paper producers declared bankruptcy and many paper mills ceased production. At the same time, the stronger players have been on a conversion binge, jettisoning the production of printing grades in favor of the paperboard and containerboard grades used to produce folding cartons, corrugated boxes and other types of packaging. (see The Target Report: Corrugated Gets Glam – May 2018). As the volume of printed communications declined, paper producers tried to get the supply curve to meet the downward spiraling demand curve for printing-grade papers. Some mills changed over to produce products for which demand cannot be siphoned off by the internet: tissue paper and toilet paper. At least one pulp mill converted to producing the “fluff” fiber used in disposable diapers and similar products.

From the printer’s point of view, paper supply was plentiful, and prices were incredibly stable. That has changed. Over the past several months, we have heard reports that some mills were simply not accepting new orders until their backlog clears. Coated paper production capacity is reportedly down at least 20% from 2016, and prices have moved correspondingly upwards by 20% or more. The price for wood pulp, the raw material for paper, has increased 23% versus the same time last year, and is up 45% or more since the bottom of the pricing cycle in 2016. Commercial printers have been forced to place orders well in advance, maintain higher inventories, and quote new orders “subject to” price and availability of paper.

In October, we noted a robust resurgent interest and investment in paper mills. However, the recent transactions do not spell relief for the commercial printing, newspaper, or publication printing segments. Transactional activity in paper production has been focused on packaging grades in apparent response to the “Amazon effect” that is increasing demand for corrugated shipping cartons and the positive economy which is driving demand for consumer packaging.

ND Paper, the U.S. subsidiary of Hong Kong-based Nine Dragons Paper, the world’s second largest containerboard producer behind U.S.-based International Paper, announced that it is acquiring the shuttered Old Town Paper Mill in Maine. Concurrent with the acquisition, ND Paper disclosed plans to invest $25 million and restart production at the mill in the first quarter of 2019. The mill, which will be producing unbleached pulp for corrugated cartons, has been silent since 2015 when its owner declared bankruptcy and sold the mill in a 363 sale (see The Target Report: Specialties are Targeted, Mills Close and Consolidate – January 2015). The plans to reopen the mill at that time never materialized and there was talk of selling the mill for scrap. ND Paper also acquired two other U.S. paper mills earlier this year, one in Rumford, Me., and the other in Biron, Wis. Both of those mills were purchased from Canada-based Catalyst Paper. ND Paper recently announced that it would be investing $111 million to increase efficiency at the Rumford mill. While it is a positive sign that a mill is starting back up and investments are planned, printing companies relying on coated printing grades should not get too excited—ND Paper is converting a machine in Biron from coated printing grades to containerboard, and there is discussion in the industry that similar conversions may be in the future at Rumford.

The private equity owners of Catalyst Paper announced the sale of the business to Paper Excellence Canada, a recent entry into the papermaking business which has been acquiring paper mills in Canada, France, and Germany. The sale includes Catalyst’s three remaining mills, a distribution center, and headquarters facility. Paper Excellence Canada produces pulp, printing papers, and packaging grades, and is focused on exporting its products to Asia and in particular to China.

New York-based private equity firm Lindsay Goldberg acquired the specialty paper business of paper manufacturer Glatfelter in October. Lindsay Goldberg has rebranded the spun-off paper products company as Pixelle Specialty Solutions. Glatfelter, known for many years for its cream-colored text papers used primarily in book manufacturing, continues on as a global engineered materials company producing filtration, hygiene, and other fiber-based products. Established during the Civil War when Philip Glatfelter acquired the bankrupt Howard Paper Company in Spring Forge, Penn., the original purchase included a shuttered stone mill building with one small paper machine. In a distant echo of today’s squeeze in the pulp markets, the former owner had been forced into insolvency by the shortage of linen rags due to the war (papermaking from wood-based fibers was still in its infancy at the time).

Carthage, N.Y.-based Carthage Specialty Paperboard, which filed for Chapter 11 bankruptcy in February 2018, was acquired by Ox Industries. The acquiring company was not the highest final bidder but emerged as the winner in the Bankruptcy Court 363 sale process due to its superior demonstrated financial ability to close the deal. Ox Industries has eight plants across several states, and manufactures paper tubes and cores, and paperboard.

New-Indy Containerboard, based in Ontario, Calif., has acquired Resolute Forest Products’ paper and pulp mill in Catawba, S.C. The acquired mill has two idle papermaking machines, formerly configured to produce coated printing paper, but given the focus of the acquiring company on packaging grades (check out the company name of the buyer), it’s likely those machines will be restarted to produce containerboard, not printing grades. Presumably, printing companies that are struggling to procure sufficient paper are hopeful that the currently active machine at the Catawba mill will continue to produce coated printing grades, at least until more supply comes online (not in sight at this time) or demand falls further (likely, but not what we hope for), and the supply and demand come back into balance.

CJK Group, which has been rolling up companies in the book manufacturing segment, cut short the plans of erstwhile competing book industry consolidator Printing Consolidation Co. (“PCC”) with the acquisition of PCC’s two companies, Dickinson Press and Kingsport Book. Dickinson Press is noted for its specialty printing of books on very lightweight papers, including bibles, educational, and business books. Kingsport Book brings specialized finishing into the CJK family. Both companies will be rolled into CJK’s game changing acquisition earlier this year of The Sheridan Group (see The Target Report – Legacy Printing Companies Fade Into History).

North of the border, Marquis Book Printing now claims to be Canada’s largest book printing company, based on its acquisition of Webcom. The acquired company utilizes traditional offset and digital inkjet printing to offer complete end-to-end book production to reduce inventories, including its BookOnDemand service. Marquis reports that the combined companies now have capacity to produce over 100 million books annually in its three plants.

Lots of ink has been spilled in the past several days about the announced acquisition of LSC Communications by Quad/Graphics, with much more to come, we’re sure, as that deal works its way through regulatory hurdles. LSC has been strategically acquiring distribution companies to augment the printing assets which were included when it was spun off from RR Donnelley (see Transformation and Rebirth – July 2017 M&A Activity), including the acquisition earlier this year of RR Donnelly’s print logistics business. LSC has also been moving upstream in electronic content, exemplified by its acquisition of MAZ Systems in July this year (see The Target Report: If you Can’t Beat ’em, Join ’em). All of those acquisitions now become part of the Quad/Graphics family which will replace RR Donnelley as the largest US-based printing company, including LSC’s significant book production capabilities. 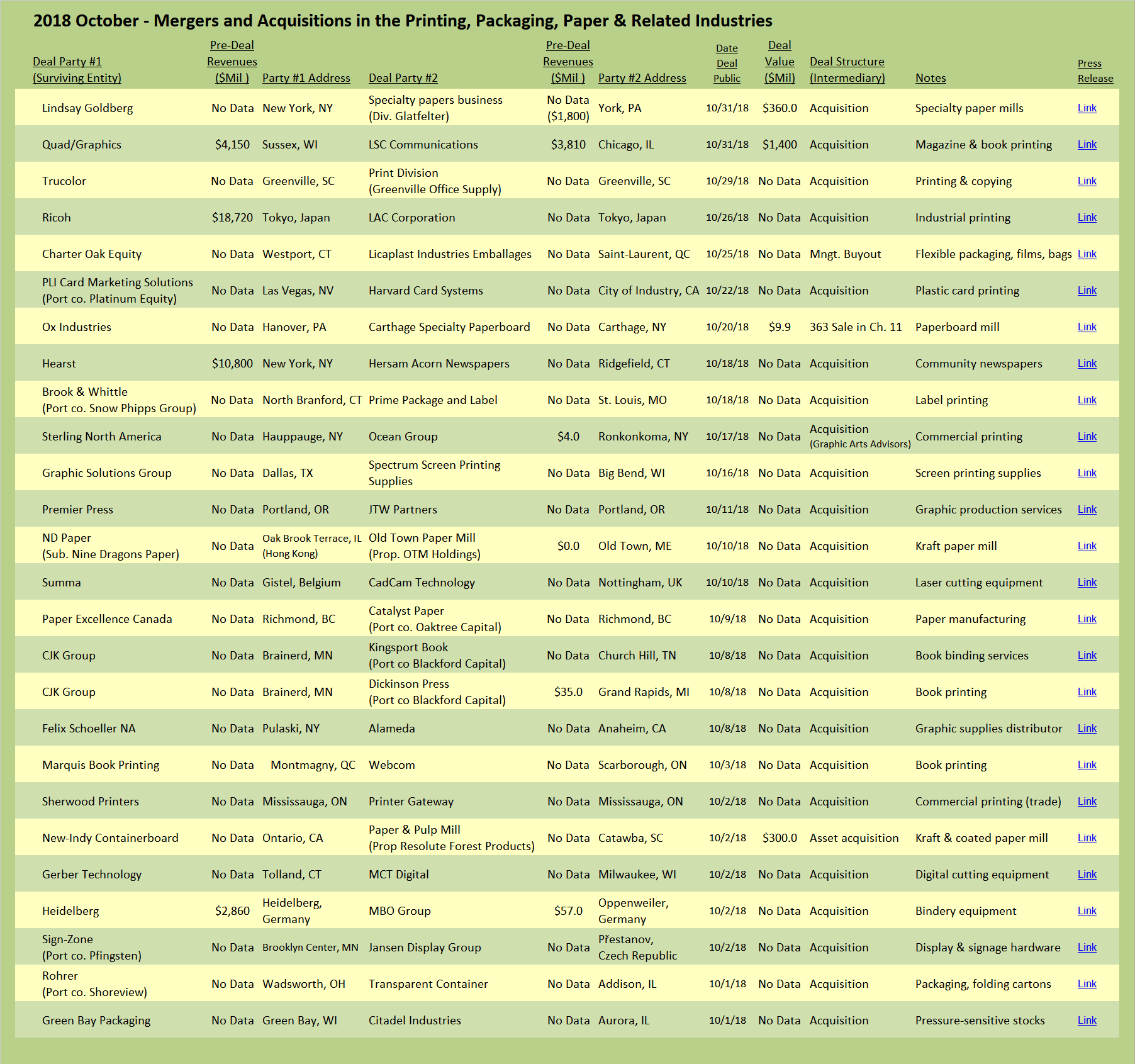