In one of the latest and most visible cases, High Quality Printing Innovations (HQPI) a shell company, under the troll company of Modern Universal Printing, LLC v. numerous print service providers and OEMs, all of the lawsuits were dismissed.

Author's note: This article was not sanctioned or funded by any university, or any private or public company. It is meant to educate and inform on a matter that is negatively impacting the growth, development, and survival of companies in the printing and related industries, Original Equipment Manufacturers (OEMs), and equipment distributors.

Print service providers and OEMs, please pay careful attention to this follow-up article. It demonstrates the wisdom of not giving in to greed and extortion meant to decimate your business and industry.

In an uncertain economy with unpredictable upward and downward fluctuations, businesses should protect themselves through an understanding of forces aimed at disruption, causing companies to decline and employees to lose jobs. The printing industry is particularly vulnerable because such forces come not only from within the industry, but from competing media industries as well as from companies demonstrating unethical business practices and having no interests other than greed.

This is an update to my previous article on the growing issue of patent trolls attempting to extort funds from print service providers and OEMs by claiming patent infringement, mostly on bad patents that can easily be invalidated through Prior Art. The original article appeared on WhatTheyThink.com and was then picked up by other industry publications.

An amazing thing happened, and I’d like to think that WhatTheyThink and my article played some role in instigating this. I sense that it was the “power of the press” and investigative reporting that brought to light one of the most devious, unethical, and immoral behaviors aimed at destroying the printing industry and its honorable companies and hardworking employees. This applies not only to small, medium, and large print service providers, but to OEMs as well that invest research and development dollars, and build applications to help improve and build the printing industry.

In this anecdote, the “good guys” won, and the patent trolls lost.

The HQPI Cases Was Dismissed

In one of the latest and most visible cases, High Quality Printing Innovations (HQPI) a shell company, under the troll company of Modern Universal Printing, LLC v. numerous print service providers and OEMs, all of the lawsuits were dismissed. See the following Court Reporter’s Transcript of the Proceedings (March 31, 2016) before a United States Judicial Panel on Multidistrict Litigation. This was a six-judge panel. 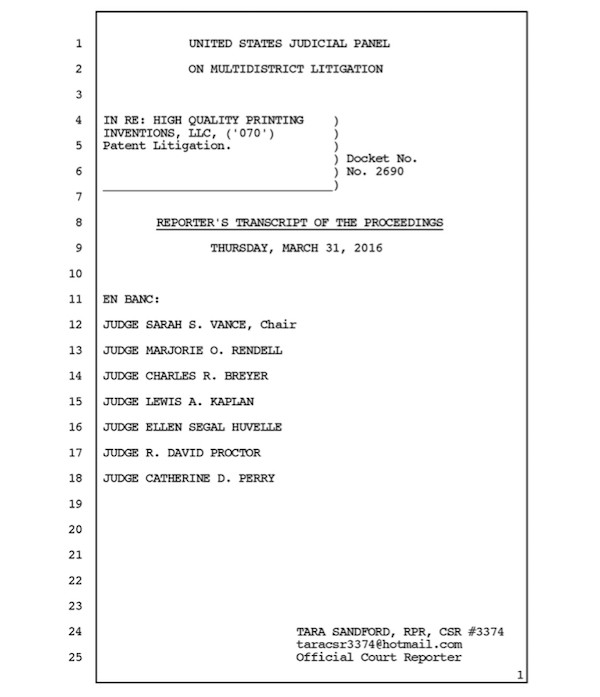 See the following four files of “Supplemental Information” declaring the dismissals and listing all defendants that are now dismissed from the legal action to which they were subjected. 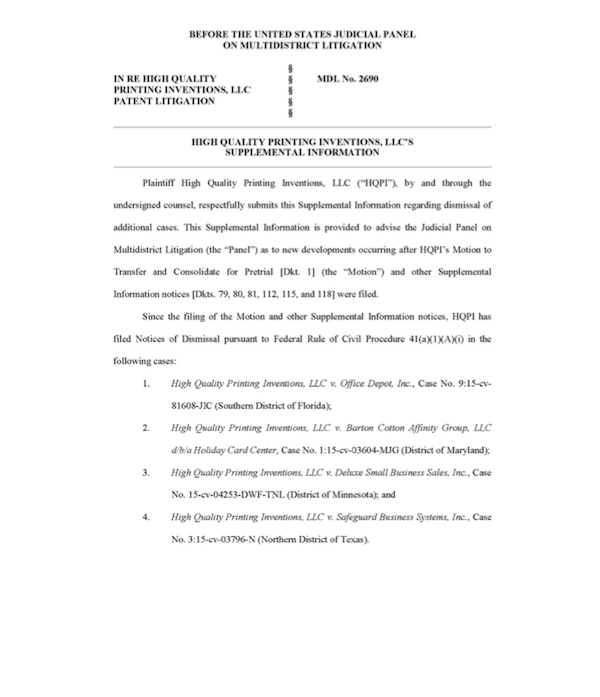 Understand that under a condition of “without prejudice,” the Complaint may be resubmitted by the plaintiff within one year. However, this happening is highly unlikely because of the costs that would be imposed on the plaintiff, and the likelihood of failure due to Prior Art that would invalidate the patent in question. There is no doubt that there would be an aggressive push to invalidate the patent should this particular matter reemerge.

The plaintiff, HQPI, through its counsel, Baker Donelson Bearman Caldwell & Berkowitz, P.C., pushed for settlement in all of the individual cases against the print service providers and OEMs. They initially were asking a six-figure amount for the right to use the technology allegedly being taught by Patent No. US 6012070 A – “DIGITAL DESIGN STATION PROCEDURE.” Recall that this was a patent originally assigned to Moore Business Forms, and then became an RR Donnelley patent when RR Donnelly purchased Moore.

When the six-figure license fee was rejected by nearly all of the defendants, the licensing asking-fee dropped to about nearly one-half. With virtually no takers at this amount, the plaintiff, out of desperation to “extort” at least some funds from the defendants, dropped their asking price to a few thousand dollars. The legal counsel representing the defendants rejected even this on behalf of their clients.

The plaintiff soon came to realize that they would be receiving nothing from nearly all of the defendants, yet speculation is that they were probably being billed huge legal fees by their counsel for services provided. Hence, all of the cases against existing defendants were dismissed, as further fighting this, with the likely of losing an invalidity contention counter suit, would create further huge expenses. I note “existing defendants” because, unfortunately, a few of the defendants did enter into settlement agreements, likely for lesser amounts than the original asking fee for the licenses. I understand that there were only a few.

My article, that went “viral” in the printing industry after being published by WhatTheyThink.com, also reached the Courts and was taken into consideration, possibly motivating the judges to let the blanket dismissal sit without allowing the plaintiff to argue its case further. The judges probably now better understand the debilitating and counter-productive behaviors of patent trolls more than ever before. In fact, the Court transcript notes that the plaintiff’s counsel didn’t even show-up at the hearing. This in-and-of-itself is very telling.

I have been in communication with RR Donnelley. However, I must honor their request for confidentially in not revealing the names of anyone that I have been in contact with.

RR Donnelley’s position noted in my article is what I had consent to quote and publish. After my first article was published, first by WhatTheyThink and then by other popular industry publications, I sent it to my RR Donnelley contact, including all of the responses that were received. I pointed out to RR Donnelley that regardless of their published position, the industry was still skeptical of RR Donnelley’s role in supporting and benefiting from the trolls. I asked if RR Donnelley would like to further respond in a follow-up article, further assuring the industry that the company had no financial interest in licensing fees paid to the trolls. I received a polite response as follows:

Thank you for your message. Hope all is well with you. At this time, I am not authorized to make any further statements on behalf of RR Donnelley.  However, I appreciate your inquiry.

This too is telling, leaving the sense of skepticism within the industry open regarding RR Donnelley’s role.

I would like to take the optimistic position and hypothesize that my article inspired RR Donnelley to consider the position that the article laid out and the immense pressure that the lawsuits placed on honorable industry companies, and that RR Donnelley supported the dismissal of the HQPI litigations.

So What of the CTP Cases?

I’ve been informed that hearings are pending on the CTP cases. I am of the impression that the CTP matter could conclude in a similar fashion to the HQPI cases. I will report on this once further information becomes available.

The next article will include the many responses received from the printing industry including some from companies that have been the subject to patent troll threats and lawsuits. It will also include what to do should a print service provider or OEM receive a letter from a patent troll claiming infringement and demanding license fees.

Are all the cases dismissed, or just the ones that showed up at the proceedings?