When the Right Brain Knows What the Left is Doing, Part 2

When last we left our crew of intrepid variable data designers (see "VDP and the Young Designer"), they were cleaning up the last shreds of munged data, sorting through dozens of photographs taken at Brickhouse Music and deciding how best to distribute the workload related to designing personalized brochures aimed at turning instrument renters into instrument owners.

So, if this class proved nothing else so far, we know that young designers don’t mind mastering some of the geeky aspects of variable data printing.  Small-to-mid-sized shops can take comfort in the fact that there is talent coming up capable, and open to, both pure graphic design and basic database wrangling.

These kids seem to be the latest step in the evolutionary process, a new breed of humanity that makes little distinction between art and craft, between technology and creativity

Nineteen and twenty-year olds don’t appear to be intimidated by technology in any form anymore. These kids seem to be the latest step in the evolutionary process, a new breed of humanity that makes little distinction between art and craft, between technology and creativity. One of my first year students was recently noticed soft proofing a booklet layout on a computer display while she one-thumbed a text message via her cell phone with her left hand and dialed up some tunes on an iPod Nano with her right. Yikes!

After considerable discussion, the group sorted itself into three teams, based on the manner of instruments being rented. One group extracted all the orchestral stringed instrument renters from the database. A second group took all the horn and reed instrument renters. A third group took the rock ‘n roll renters. Their logic: each group was a different demographic and should receive print matter appealing to that group.

In the middle of all the design work were demonstrations of InDesign’s Data Merge functionality and basic Print Shop Mail. The rock and roll group came up with the idea of having the renter’s name crawl along the pick guard of a Fender Strat, a design idea they were able to realize using InDesign which no one could figure out how to replicate using Print Shop Mail.

you have to remember to save all the cashed in coupons, and Brickhouse’s staff --well, they’re fine musicians

Each group worked personalized coupons into the design to allow Brickhouse to track exactly who was responding to the offer. Of course, to do that, you have to remember to save all the cashed in coupons, and Brickhouse’s staff --well, they’re fine musicians.  More on that later.

The print runs were a revelation. InDesign essentially generates a high resolution page for every record, and with the graphics-heavy brochures favored by the designers, a variable run of 40 or 50 rock and roll renters generated a postscript file over a gigabyte in size. For both the horns and the strings brochures, Print Shop Mail generated only one high resolution set of images and sent the RIP hundreds of miniscule records files, resulting in a combined PostScript file less than 150 MB in size. 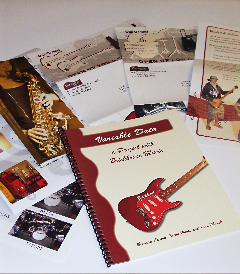 We delivered the brochures to Brickhouse in mid-November. OK, the brass brochures had to be redone due to weird typographic anomalies in the addressing that were missed by our young proofreaders. That, and the designer originally showed a duotone exterior shot of the store with impressive thunderheads accumulating in the sky above the store. Owners Jen and Tom Bentz thought it made their storefront look the entrance to Hell, so that panel was scrapped and replaced by a sax player.

Seven or eight renters responded almost immediately, flipping over to ownership, turning in their coupons and collecting their related special offers. And then our campaign ran smack up against the Thanksgiving and Christmas holidays. No responses were logged beyond those initial eight for weeks.

The offers were good till January 31st, of this year. Fresh into the new year, and just when we thought the campaign had been an excellent failure, renters started flipping to owners again. Of the three hundred and fifty odd targeted renters, somewhere almost 5% eventually took Brickhouse up on the offer. We don’t know the exact figure as some of the coupons were tossed in the process. So, our first venture into VDP wasn’t an enormous success, but it peaked Brickhouse’s interest and brought a few thousand dollars back into the till.

As for our young designers, those Brickhouse VDP brochures turned out to be killer portfolio pieces. Just killer. Those guys and gals were hot properties at InternExpo this year. Now they’re at Schawk, and Southern Graphics, and Periscope and Western Graphics, among others.  Scattered like crows, to paraphrase Tom Waits. Speaking of Western Graphics, an advanced and energetic commercial offset/digital business in St. Paul, we are in their debt. Two of our students worked at Western part time during the year, giving us quite a leg up studying their VDP campaigns and touring their operation.

We’ll do it differently next time. Perhaps an email blast before and after the physical mailing. Supporting signage posted inside of Brickhouse as visual reminders. A crawl on Brickhouse’s web page. Who knows? There’s always next September.