A tale of two technologies&

By Patrick Henry Published: October 17, 2007
A tale of two technologies—one admittedly "pedestrian," the other potentially "disruptive"—continues to unfold at the Agfa Graphics manufacturing center in Branchburg, NJ, where the company has made major investments to strengthen its market position in both processes.

In Branchburg last week (October 4), Agfa cut the ribbon on a new "inkjet competence center" that will serve as a demonstration, training, and sales headquarters for Agfa wide-format inkjet systems. Also announced was an expansion of the plant's plate production line that will significantly increase its output of thermal media for commercial, publication, and newspaper CtP.

Tom Saggiomo, president of Agfa Graphics North America, termed CtP "pedestrian" as he emcee'd an all-day event in which Agfa customers and dealers joined members of the graphic arts trade press for briefings and inspection tours of the inkjet center and the plate line. But he made it clear that while inkjet may be the technology du jour for high-visibility growth, CtP is "pedestrian" only in the sense that CtP plates, platesetters, and workflows have become near-universal standards for print production. Digital plates are the bedrock of Agfa Graphics' business, Saggiomo said, and will remain so as the company becomes an independent, publicly traded entity in a "de-merger" from the Agfa-Gevaert Group next year.

Although print unquestionably is "challenged" by other communication methods, Saggiomo said, Agfa believes there are ways to make it "more viable, more touchable, and more feelable" in a highly competitive media mix.

Those who will find inkjet a "disruptive" technology are analog screen printers and users of other conventional processes for large-format output, according to Julian Robledo, Agfa's general manager for inkjet solutions in North America. He said that as the supplier of a complete line of inkjet products, Agfa will aim to capture 25% of the North American inkjet market by 2010. 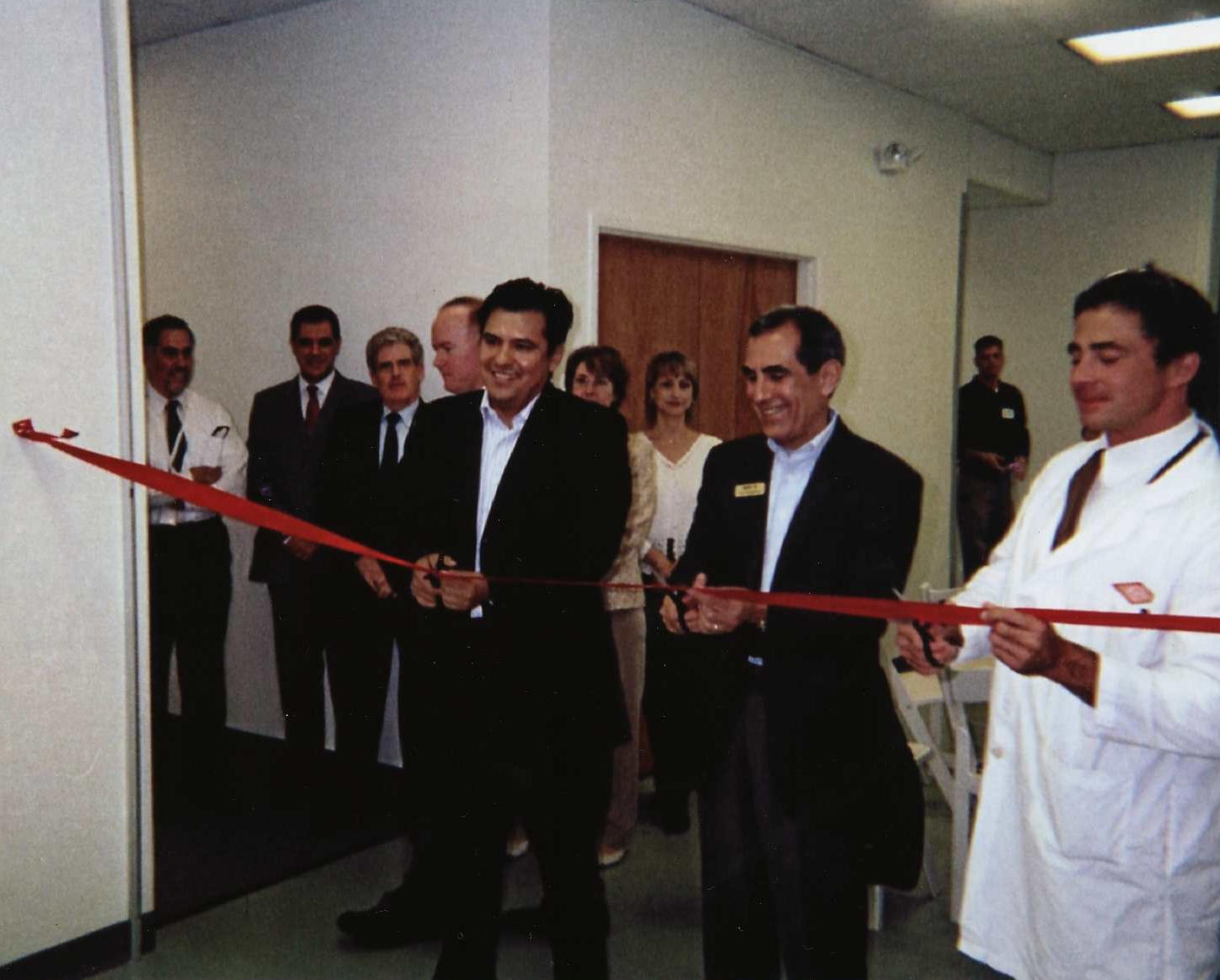 "Challenged," but Rising to It

In opening remarks to visitors at the Branchburg plant, a 240,000-sq.-ft. facility located about 50 miles west of Manhattan, Saggiomo spoke of "an intense debate in the world about the relevancy of print." Although print unquestionably is "challenged" by other communication methods, he said, Agfa believes there are ways to make it "more viable, more touchable, and more feelable" in a highly competitive media mix.

Although the "common bond" of silver-halide film that used to unite graphics with Agfa's other major businesses—medical imaging and industrial materials—is gone, Saggiomo said, the company's investment in filmless technologies for printing has propelled it to global leadership in digitally enabled print production.

According to Saggiomo, half of all printing facilities worldwide use Agfa products, equipment, or services; three-quarters of all newspapers use Agfa software. Agfa operates as the world's largest supplier of printing plates through regional manufacturing and distribution centers like the one in Branchburg.

There, Saggiomo said, the company will make a "substantial investment" to expand the plate line's ability to produce thermal plates based on Agfa's ThermoFuse technology: the chemistry-free :Azura, the low-chemistry :Amigo, and the long-run, no-bake :Energy Elite.

The expansion is necessary, he said, because 20% of the world's users of ThermoFuse plates are in North America. Saggiomo declined to quantify the plate line's current production volume but said that its output would be significantly stepped up after the expansion is completed in the first quarter of 2008.

Jeff Aurichio, director of operations in Branchburg, said that the plate line went into production in 1968 and began making digital plates in 2001. Today, 90% of the plates it produces are digital. The plate line is the centerpiece of a 41-acre manufacturing complex that operates around the clock, 360 days a year, employing about 180 people. Most of its output is shipped to North American customers from a central depot in Dayton, NJ. (Agfa maintains two other facilities in the Garden State: a headquarters in Ridgefield Park that also serves as a demonstration center for software and premedia; and a film and chemical plant in Teterboro.)

Jeff Aurichio, director of operations in Branchburg, said that the plate line went into production in 1968 and began making digital plates in 2001. Today, 90% of the plates it produces are digital.

The plate line, one of only 30 such electrochemical graining lines in the world, makes plates ranging in size from 8" x 10" to 59" x 77". Saggiomo noted that USA Today, The New York Times, and many other U.S. newspapers source their plates from the Branchburg plant.

The line, which resembles a gigantic web press, is contained in a bay that stretches for more than 200 yards. It is fed from rolls of aluminum that can be spliced to create webs of plate metal that are literally miles in length. During the inspection tour, Saggiomo noted that the price of plate-grade aluminum has doubled in the last two years because of increased demand from China and other nations with expanding print industries.

When the line is running, webs of aluminum up to 60" wide first pass through an array of rollers resembling the festooning system of a web press. The plate web then moves into a series of electrochemical baths that give the metal a grained and anodized surface on one side. Extrusion coating, application of emulsion, and drying follow. Then the web is ready for conversion: sectioning into individual plates following a camera inspection procedure to spot and reject defective material. After edge trimming, the web is cut to size by a rotary knife that runs at the same speed as the plate line.

Insertion of slipsheets and stacking complete the plate production sequence. The back of each plate is stamped with its date and time of manufacture as well as an arrow denoting its direction of travel through the plate line—analogous to an indication of grain direction in sheets of paper.

"The Next Technological Frontier"

Returning to the non-impact portion of Agfa's business, Saggiomo said that establishing the inkjet competence center in Branchburg was an element of Agfa's strategy to become a major player in the industrial inkjet market—an intention that the company first announced at drupa 2004. According to Robledo, Agfa sees industrial inkjet both as "the next technological frontier" and as a business opportunity that will be "instrumental to Agfa's growth and profitability moving forward." Quality of execution, not speed of time-to-market, would be Agfa's emphasis in pursuit of its inkjet goals, he said.

Stephen Cutler, the center's manager, said that Agfa would increase its share of the North American inkjet market to 25% from the roughly 3% it now holds.

Stephen Cutler, the center's manager, said that Agfa would increase its share of the North American inkjet market to 25% from the roughly 3% it now holds with an integrated offering of hardware, software, inks, and substrates. The choice of target markets is "wide open," he noted, although analog screen printing is the low-hanging fruit in terms of processes that wide-format digital inkjet is best suited to replace. The promotional slogan will be C3, or "C to the power of three"—complete, end-to-end performance in service, integration, and benefits for Agfa inkjet customers. (More information is available at http://www.switchtoc3.com.)

Agfa has four platforms for wide-format inkjet output. The two that can be seen in action in Branchburg are the 63" :Annapurna M and the 98.5" :Annapurna XL, UV-curable devices for roll-to-roll and rigid-substrate printing of indoor and outdoor signage and displays.

Agfa also offers the :M-Press, a flatbed device that can print sheets as large as 63" x 102" at up to 100 sheets per hour; and the :Dotrix, a roll-to-roll press with a 24.8" print width and an output speed of 78.7 feet per minute (9,763 sq. ft. per hour). Both the :M-Press and the :Dotrix print with UV inks. The :M-Press can be configured as a hybrid printing line with the addition of screen printing modules. The :Dotrix can be integrated with flexo printing stations, slitting, and die-cutting. Agfa supplies printheads, inks, and workflows for all of its inkjet systems.

In a special segment of the program on October 4, Saggiomo and the Branchburg team saluted the first two winners of Agfa's Environmental Recognition Awards, created to recognize customers who have adopted and actively promote "green" technologies.

The honorees, H&S Graphics of Lodi, NJ, and Accell Graphics, London, ON, use chemistry-free :Azura plates and recycle virtually all of their production materials. John Santangelo, executive vice president at H&S Graphics, said that the family-owned business also prints with zero-VOC inks and sponsors a tree-planting program as a measure to remove carbon dioxide from the atmosphere.

Warner Tenkate, owner of Accell Graphics, noted that the company's Web site offers customers detailed information about the environmentally beneficial characteristics of the production of their jobs that they can share with their own customers. He said that wherever possible, Accell specifies paper certified by the FSC (Forest Stewardship Council) as having come from a forest-friendly source.