So Many Books, So Little Time* —February 2021 M&A Activity 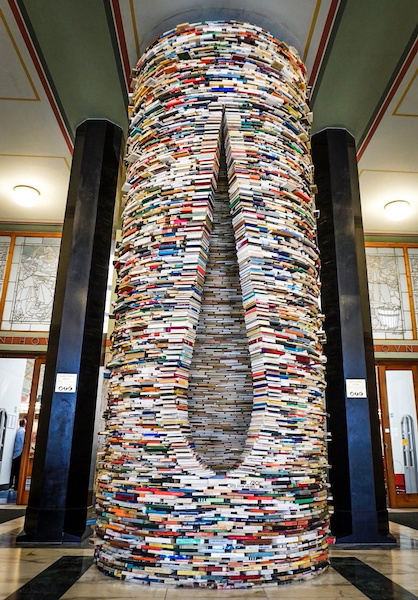 Books endure. We discard newspapers the day after, magazines stick around a bit longer, junk mail not at all, but books we keep. After we read a book, we shelve them, we show off our book collection as backdrops in our Zoom calls, we stack books in corners, we store them in boxes, we might drop them off at a used bookstore, we might even make books into works of art, but we almost never just toss them out. Printed books endure.

Book printing company Grafica Veneta, located in the Italian province of Padua, a half hour drive from the causeway to Venice, announced the acquisition of a majority ownership stake in  Lake Book Manufacturing. The acquired company is close by Chicago’s O’Hare airport, likely an enabling factor in the decision by an Italian book manufacturer to invest in a US-based partner. The owner of Lake Book, Dan Genovese, noted that his family’s Italian heritage also played a part in the decision to seek and accept an international investment in the company, especially one based in Italy. Both companies are positioned to manufacture a wide range of book products for the publishing trade, with capabilities ranging from one-color to full-color text, paperback and hardcover editions, along with fully decorated book jackets. The international connection and reach can be a key factor when printing books for the big publishing houses, especially when a simultaneous release of blockbuster titles is integral to the marketing plan, such as the recent release of Stephen King’s new eerie crime novel Later, printed in Italy by Grafica Veneta.

Serial acquirer CJK Group has emerged as a major player in the book manufacturing business, growing via acquisition to build out a network of production plants that cater to the educational book, journal, and publication segments (see The Target Report: CJK Goes Global as Cenveo Unwinds—September 2020). And not to be forgotten, the restructured LSC Communications company has emerged from bankruptcy with a deleveraged balance sheet and financial backing from Atlas Holdings. With significant book production capacity, LSC now enjoys not only the financial stability of Atlas Holdings, but also a paper products brotherhood within the Atlas portfolio including the Finch and Twin River paper manufacturing companies.

Deal activity continues apace upstream from the printers. Outside Integrated Media, publisher of Outsidemagazine and other outdoor enthusiast titles, was acquired by Pocket Outdoor Media. Based in Boulder, Colorado, Pocket Outdoor Media has changed its named to simply Outside as recognition of the branding power of the acquired iconic magazine. The combined company now owns a multitude of specialty publications and digital properties highly targeted for runners, bicyclists, skiers, rock and ice climbers, and devotees of many other health and fitness activities.

Less exciting to most than rock climbing, skiing, or white-water rafting, but nonetheless still driving print volume, are the titles of educational book publisher AIP Publishing, a subsidiary of the American Institute of Physics. Based in Melville, New York, AIP Publishing recently announced the acquisition of University Science Books, a publisher of books for upper level courses in the physical sciences. The acquired portfolio includes titles such as Quantum Chemistry, Statistical Mechanics, Molecular Thermodynamics, and other academic books. Not quite the page-turners of a Stephen King novel, but according to AIP, its books are published with the highest design and print production quality, setting the gold standard in their respective scientific disciplines.

Still no word from the US Department of Justice on approval, or not, of the pending acquisition of Simon & Schuster by Bertelsmann, the German publishing behemoth (see The Target Report: Dystopia, Social Justice & Steamy Romance—November 2020). The Authors Guild and other writers’ groups have taken an active and vocal position against the takeover, arguing that the deal would give Bertelsmann the pricing power to squeeze down the size of author’s advances and reduce royalties.

The opposition’s position is not limited to just financial concerns. The groups maintain that Bertelsmann’s market position, should the deal be approved, will lead to a decrease in quality and diversity of published works, and furthermore they suggest that this in turn will be a fundamental threat to American democracy. The Authors Guild goes one step further—they are not just asking the DOJ to simply block the deal; they are urging the DOJ to restructure the entire US market for books and take on not only Bertelsmann, but also break up Amazon’s dominant position in book retail.

The Author’s Guild complaint extends beyond control of the publishing houses, their letter cites Bertelsmann acquisition of the Quad book manufacturing plants as further evidence that the German giant has gained an untenable position in the physical production of books, as well as control over content. However, we suspect that notwithstanding Bertelsmann’s dominant position, other printing companies such as the newly combined Grafica Veneta–Lake Book stand ready to provide the alternative manufacturing capacity to all who come knocking on their doors.

Phoenix Group, a large web and sheetfed commercial printing company in Philadelphia, announced the merger of its Phoenix Lithographing unit with New Jersey-based ICS Corporation into a new entity, the Phoenix-ICS Group of Companies. The combined company can print and mail over 100 million pieces of direct mail each month and makes special note of its minority-owned, disabled combat veteran-owned and woman-owned business classifications.

Direct mail often requires envelopes, and some printing companies have taken steps to secure their own ability to print and convert envelopes. Moore, the giant direct mail company headquartered in Tulsa, Oklahoma, purchased Worchester Envelope in Auburn, Massachusetts. The 125-year-old acquired company operates out of a 180,000-square-foot facility, offering a diverse range of converting and printing options. This follows Moore’s investment in and resurrection of the failed Colortree printing business in Richmond, Virginia which had been a major supplier of specialty envelopes to the non-profit solicitation businesses surrounding the Washington DC region.

JN White, an upstate New York manufacturing company operating in the corner of the printing world known as industrial printing, acquired ECI Screenprint in Watertown, Connecticut.** Both companies produce a range of products that are most often incorporated as components into other larger products. Originating as screen printers, industrial printing companies have evolved into sophisticated manufacturing operations. Products produced by JN White and the newly renamed ECI Technologies range from the simple, durable labels and decals, up to the highly engineered and complex user interface membrane switches that control everything from our office copiers to medical and military devices. JN White announced that it will continue to operate manufacturing operations at both locations, retaining ECI’s employees with plans to hire more over the next year.

* “So many books, so little time” has been attributed to rock musician Frank Zappa.

** Graphic Arts Advisors, publisher of The Target Report, served as exclusive advisors to ECI Screenprint in this transaction. 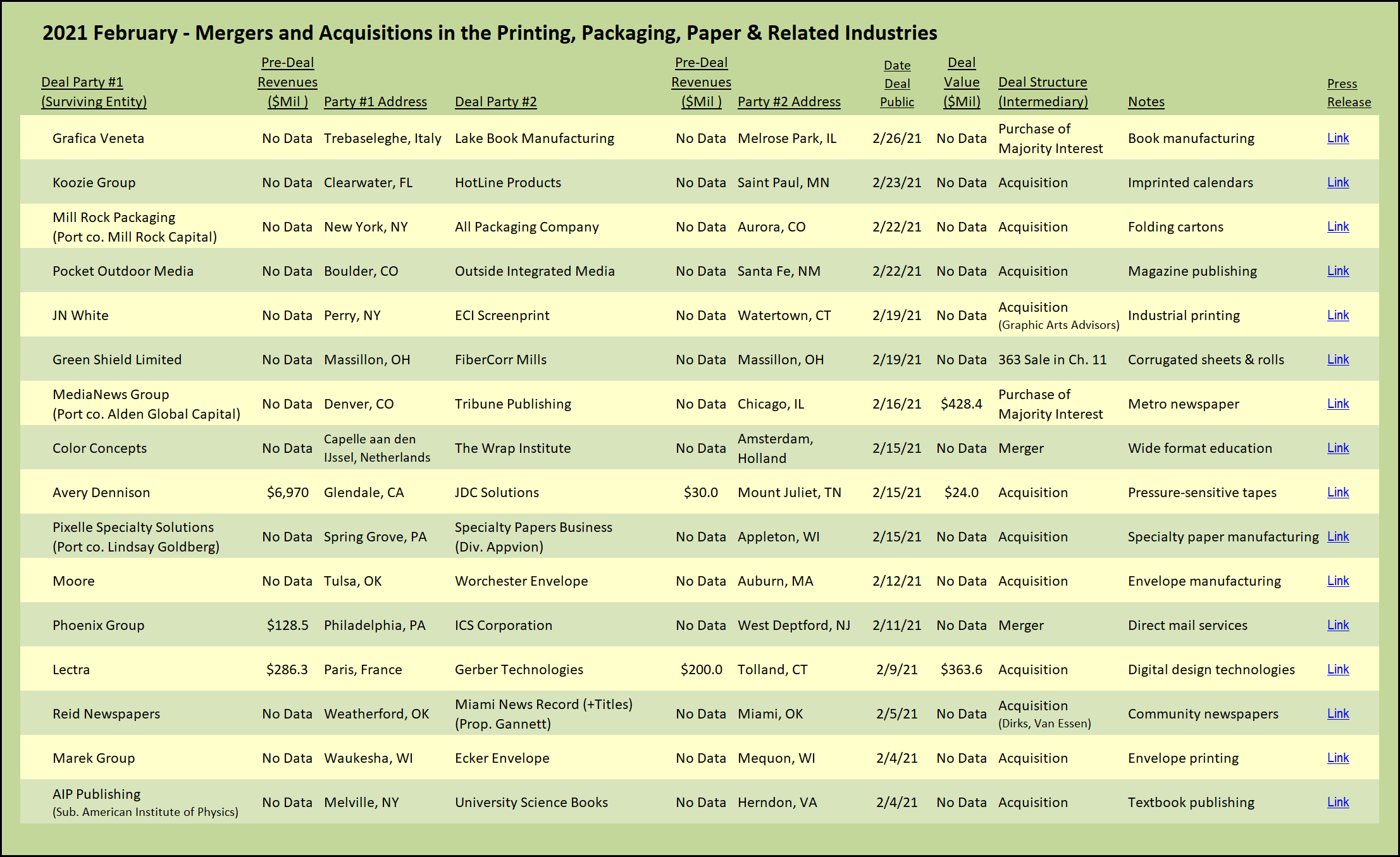