ProAmpac Brown Bagging It, Alcom Spreads Out, Ebony & The Voice Rise From the Dead, and more… 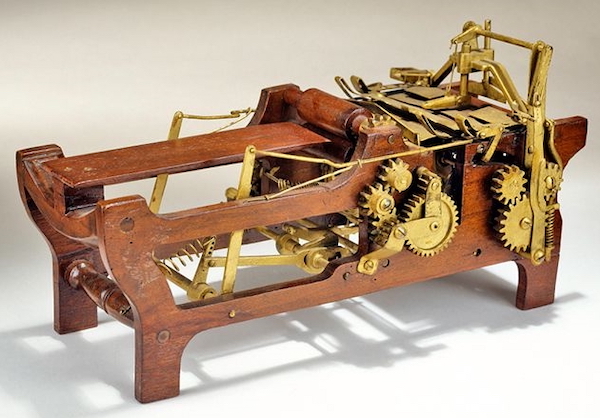 Flexible packaging is arguably the hottest segment in the printing and related industries, at least in terms of valuation multiples paid. Enter the old-fashioned brown paper bag, the target of ProAmpac, one of the most aggressive roll-ups in the flexible packaging business. ProAmpac announced the acquisition of Rosenbloom Groupe, a privately-owned company based in Montreal, Quebec. The company manufacturers bags: plain brown bags, printed branded grocery bags, bread bags, grease-resistant bags for French fries and donuts, fast-food take-out bags, and wine bottle bags. Nothing fancy here, just millions and millions of unpretentious bags.

The brown paper folded bag. It is a simple device, stacks neatly, opens easily, and stands up on its own for easy loading. The original machine-made paper bags were flat affairs produced on a machine invented in 1852 by a schoolteacher. He patented his device and left the teaching profession to found the Union Bag and Paper Company, predecessor of pulp and paper company Union Camp, which eventually was folded into International Paper.

It took a young mechanically-minded woman, Margaret “Mattie” Knight, to come up with the next significant improvement that led to the ubiquitous flat-bottom grocery bag. Mattie was working in a paper bag factory and true to her inventive nature, she was constantly on the lookout for how to create improvements to the devices on which she was assigned. (While still in her teens, she had invented a safety device for a knitting loom at the cotton mill where her brother worked.) Her inventiveness led to the design of the first machine able to automatically fold and glue a flat-bottom bag, a much more useful product that became known as the “Self-Opening Sack.” Knight built a wooden model of her invention (pictured above) but needed an iron model before she could apply for a patent. A machinist working in the shop where the model was built stole her ideas and beat her to the patent office. Confronted with his theft, the usurper defended his position by asserting that as a woman Knight “could not possibly understand the mechanical complexities of the machine.” Fortunately for Knight, she kept detailed diary entries, drawings, and full documentation of her invention. She pursued her rights and prevailed in court, won the rights to the patent in 1871, and with a business partner proceeded to co-found the Eastern Paper Bag Co. Mattie Knight is widely recognized as the first woman to receive a U.S. patent in her own name, one of 89 patents she eventually successfully filed.

ProAmpac’s acquisition of the Rosenbloom Groupe includes the Hymopack subsidiary which manufactures plastic bags and can liners, and Dyne-a-Pak which manufactures polystyrene foam trays used in food packaging applications. The acquisition of the Rosenbloom Groupe is the latest in a long list of acquisitions by ProAmpac, with financial backing by Pritzker Private Capital, its second private equity sponsor (see The Target Report: Moving Pieces Around on the PE Chessboard – October 2016.) 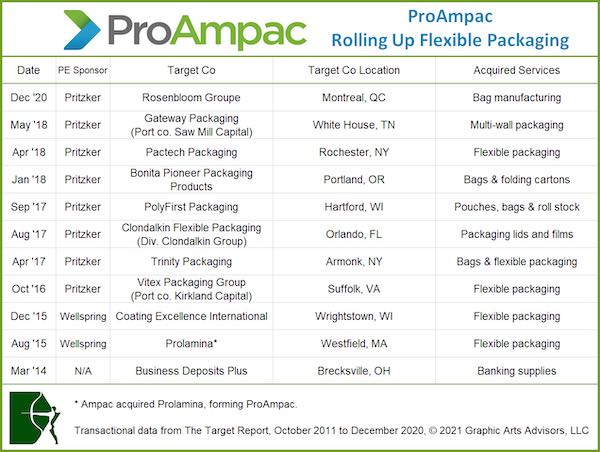 PPC Flexible Packaging, a portfolio company of Morgan Stanley Capital Partners, also bagged a target in the bag segment, with the acquisition of Custom Poly Bag. The acquired company, located in Alliance, Ohio, is a wide-web flexographic printer and converter of flexible films, bags, and pouches. The company has in-house extrusion capabilities to make its own films. The company’s products are used to package baked goods and other foods, as well as printed plastic shopping bags adorned with full-color advertising.

Alcom, a privately-owned commercial printing and diversified marketing service company, acquired Christmas City Printing. Fittingly, the acquisition was announced just in time for the Christmas holiday, with plans to keep the Bethlehem facility operating as satellite operation of the main facility in Harleysville, Pennsylvania, about an hour away. A serial acquirer of companies located in southeast Pennsylvania, Alcom joins the ranks of the commercial printing firms that have been executing regional multi-plant strategies. In this pared-down version of the consolidation wave of yore, a financially strong company with an established operational base expands its reach with strategic acquisitions that share resources across a platform of companies all within a reasonable distance of travel (see The Target Report: Commercial Printing: Consolidation or Regional Expansion? – November 2019).

Lithtex NW in Bellingham, Washington, was acquired by Northwest Center Services, a non-profit corporation and unlikely buyer of a commercial printing company. Northwest Center was founded in 1965 by a group of Seattle parents that were determined that their children with disabilities, who were rejected from public schools, be included in the public school system, and were entitled to an appropriate education. Successful in their efforts to have legislation enacted in Washington state, the parents subsequently helped draft a national version and were instrumental in support for The Education for All Handicapped Children Act, which became law in 1975. Northwest Center now owns and operates six businesses as “social enterprises” that employ disabled people as an integral component of their corporate mission. The businesses include a chain of thrift shops, janitorial and cleaning services, a laundry servicing hospitals and hotels, and now, a commercial printing company.

Basketball player turned multi-millionaire franchise owner Ulysses “Junior” Bridgeman has emerged as the winner for the remaining assets of Ebony and Jet in the 363 sale under supervision of the US Bankruptcy Court in Houston. In an unusual move, the company was converted to a voluntary Chapter 11 reorganization in September, after initially being forced into a Chapter 7 liquidation bankruptcy proceeding by its creditors in July. The conversion to Chapter 11 set up the company for an orderly and public bidding process and eventual emergence from bankruptcy. The sale to Bridgeman does not include the magazine’s extensive and historic photo archive, which had been previously sold for $30 million to a group of philanthropic foundations that then donated the photo archive to the Smithsonian National Museum of African American History and Culture (see The Target Report: Buyers are On The Move and On Track – July 2020). Bridgeman paid $14 million for the residual assets and has announced that while Ebony will primarily be a digital publication, the plan includes occasional special print editions.

In another pending resurrection of a print title, Street Media has acquired The Village Voice from its former publisher. The Voice was a mainstay independent hard left-leaning weekly newspaper that began publication in 1955 with offbeat and irreverent articles, often national in scope, but centered around New York City politics, culture, and entertainment. The Voice reported on the cultural movements in New York starting with the 1950’s beatnik generation, and spanning the hippie movement, disco, punk, the club scene, grunge, hip-hop and the post 911 NYC urban comeback. Co-founded by famed but controversial author Norman Mailer, the Voice ceased print publication in September 2017 (with Bob Dylan on the cover of the final print edition). Original reporting and cultural coverage ceased in 2018. Brian Calle, the owner of Street Media, which publishes LA Weekly, a west-coast alternative newspaper, has announced that the Voice’s website will go live in early 2021 and his plan is to publish a “comeback” print version later this year, with quarterly print editions to follow. 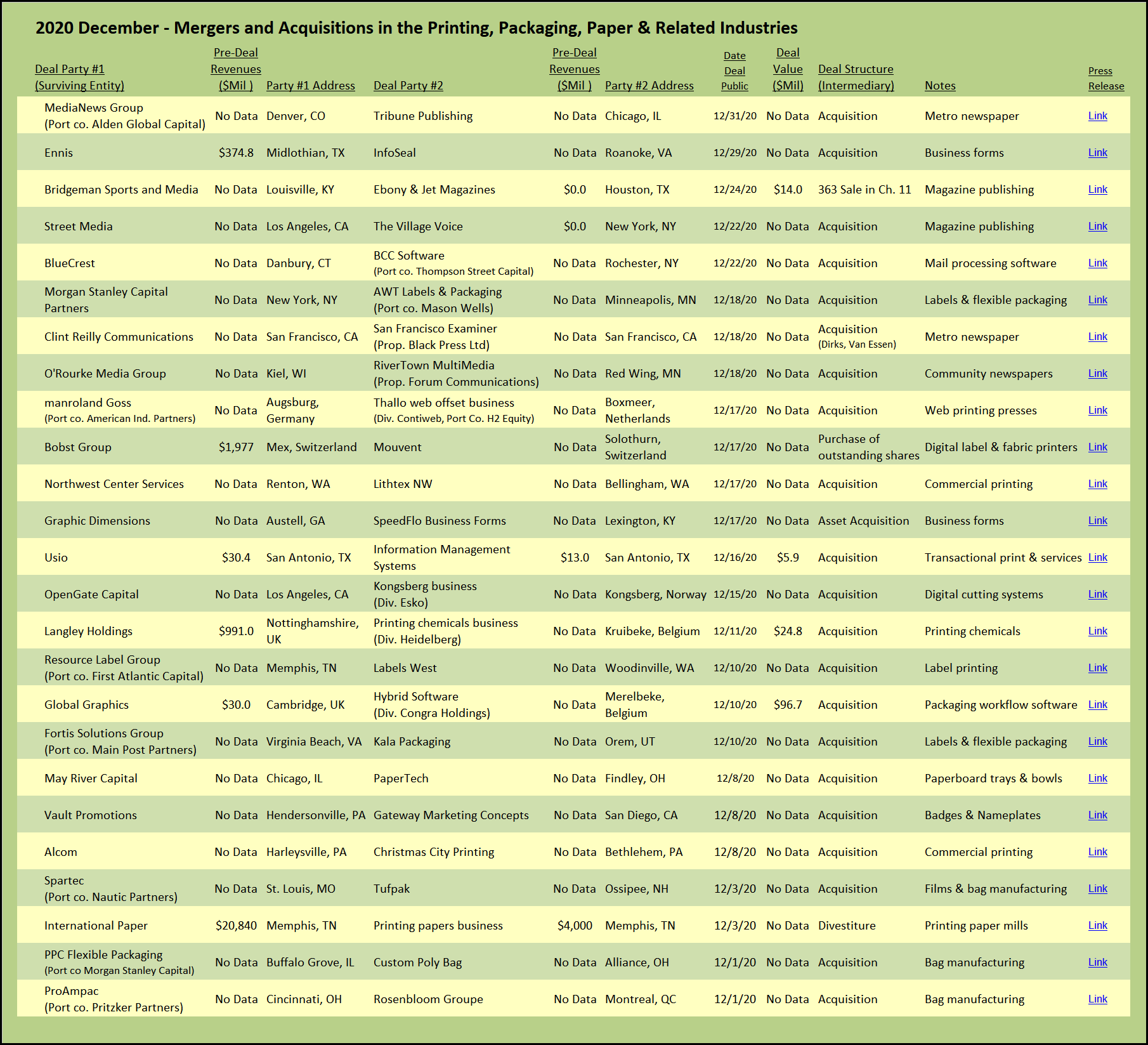