It all started when some clever guys at a Danish university spotted a market which had been totally ignored by the established robot manufacturers. Small, easy-to-program robots for simple tasks, which normal robots could not handle, because they were too big and/or too complicated to program.

In the process, it appeared that such small robots also could bypass the established robot security requirements (fences, scanners etc.), so suddenly the fence-free robot was born just because of the small robots’ limited performances in speed and payloads.

These university guys founded Universal Robots—and the rest is history. UR quickly cemented its marketing position as the robot manufacturer of fence-free robots (branded collaborative robots or cobots), and even though the conventional robot manufacturers also entered this significant new market, the small UR cobots are today synonymous with fence-free, small, and easy-to-program robots.

Sales of cobots increased 23% in 2018 vs. 5% for conventional robots. The sales volume of cobots is still small, but the trend is clear: new markets have been discovered for small robots. Does this indicate a paradigm shift, or is it just a result of the general robotic development and clever marketing?

Fence-free cobots are  slow and have limited power, because otherwise they can´t be close to operators. So the central question is: What is collaboration? The official definition is: Two or more persons working together for a special purpose, which in robotics means an operator and a robot working together.

The robot industry does not address collaboration but uses its four-point safety regulation chapter (ISO/TS 15066):

Applications based on speed and separation monitoring can have very powerful robots working in fence-free areas with f.ex. safety scanners. Depending on the operators’ proximity, the robot either slows down or stops when operators enter the area and continues its work when they leave. These applications are suitable, if the operators only enter the area from time to time, but meaningless if they are there all the time.

Applications based on power and force limitation can have operators in the robot’s working area all the time. The robot is allowed to touch but not harm operators, so the robot must be slow and have limited power—and must work with harmless tools and payloads. It must also have built-in pressure sensors, which stop the robot immediately if a counter pressure from operators is detected.

These applications are smart if operators are constantly in the work area, but make less sense if operators only enter occasionally. The application, not the robot, must be approved as harmless to be allowed as fence-free. And the definition of harmless is both complex and restrictive.

All Robot Cells Can Be Fence-Free

The big misconception among many new robot buyers is that fence-free robots are synonymous with cobots, while the reality is that all robot cells can be fence-free. Taking fencing out of the equation, the fundamental question is not if there can be operators in the robot area, but how often and for how long will there be operators in the robot area? Reducing the performance of fast robots for a limited time is much smarter than using slow and expensive cobots all the time.

Examples from the Printing Industry

In the printing industry, several applications with cobots have been introduced recently. F.ex. the Cobostack from MBO has been greatly—and fairly—received by the market, because it relieves the operator from lifting heavy materials to pallets. But this is not a collaborative job, because if the robot performs its job well, there is no need for an operator in the working cell, except for pallet changes (which also could be automated), and consequently no need for a cobot—but it was chosen, because it is fence-free. 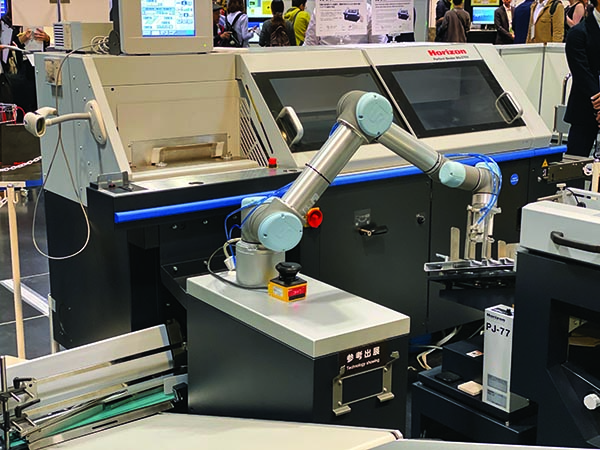 Another example is Rob from swissQprint, which lifts single sheets from a pallet to an inkjet printer and back again after printing. If the robot performs its task well, there is no need for an operator in the working area, except for pallet changes. The cobot was chosen because it was fence-free. An even greater paradox is that for bigger table sizes, the cobot lacks reach, so a much more flexible solution could have been obtained with a conventional robot with a longer reach combined with a scanner. 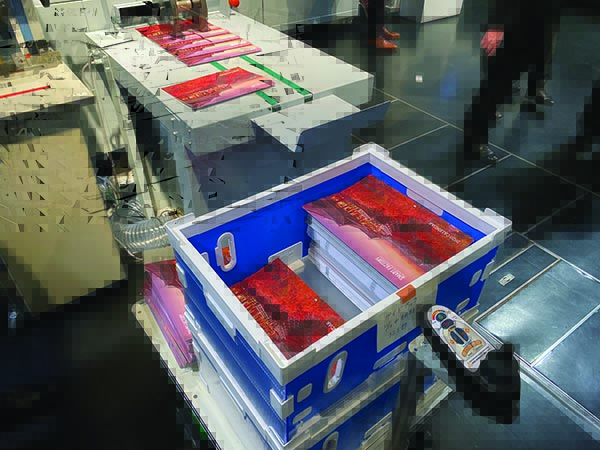 In the Future, All Robot Cells Must Be Fence-Free

Another paradox of UR’s unquestionable cobot marketing success is that the market now starts to demand that not only simple, easy-to-program robots, but all robot applications shall be fence-free. So the real paradigm shift in robotics was not the introduction of small cobots, but that their appearance initiated the shift toward all robot applications being fence-free.

The real challenge in industrial manufacturing environments is not how to make a small cobot work together with an operator in a production cell, but how to protect the operators in a total production area with many robotic production cells, where operators only enter the cells now and then. Several software developers are working on solutions, and when they are ready for commercialization, we will see a total shift in how robots can be used in various industries.

The iPhone didn’t kill Ericsson and Nokia because of technology, but because of ease of operation, and UR’s approach with a kind of iPad concept for programming was very smart. However, what can be programmed?

The whole cobots concept is focused on simple applications programmed via iPad-like programming units, but without a perception of the complexity of specific applications, it is easy to jump to conclusion that small cobots can be used for all kind of applications.

Graphic Robotics basically works with very complex applications based on flexible materials such as paper and ever-changing flows of new jobs. We have stopped counting the number of times printers have asked us to develop a simple robot application for this or that, because as soon as we scratch the surface of the application, it immediately becomes complex. This doesn’t mean that there are no simple robot applications in printing—there are a lot of them—but it means that each application must be evaluated carefully.

The only approach to a successful development of a robot application is to study it carefully before selecting the appropriate robot, not the other way around. If the application turns out to be complex, a robot with a powerful controller as well as complex programming is required. Then it is time to consult professional robot application developers with knowledge within the specific industry. Anything else could end up being very expensive.

Having said this, it would have been good if the established robot manufacturers had understood the iPhone message in due time, but new generations of teach pendants are coming.

A logical development is a robot that is a cobot and a fast industrial robot, when needed. Some of the industrial robot manufacturers have developed such hybrids, but one could question the wisdom of such a hybrid, because the application must define if a cobot is required or not. But it is of course always smart to hedge the future and invest in a robot that can be both, if one is unsure of potential future applications.

A robot can only do what it has be programmed to do. Not even the most advanced AI concepts can change this. The same goes for vision control, which also must interact with something already programmed.

In the printing industry, with flexible materials and ever-changing flows of new jobs, the robots can be integrated into production lines as process robots, and then it is impossible to try to program all thinkable alternatives in advance, because there will always be a new, unpredictable alternative—which not only stops the robot but the total production line. Consequently, the need for the skilled print plant operator to be able to communicate with the robot cell and make appropriate adjustments on the run is fundamental.

Graphic Robotics has solved this fundamental programming challenge by having the basic programs running the robot cell, while the operator can adjust the job-related parameters on the run and in this way communicate with the programs. This is real collaboration.

It also means that the total robot cell can be run via a separate screen or via menus on the production line’s operator screen, which makes everything more integrated. No operator should ever be asked to use a teach pendant to operate the robot, so “easy to program” doesn’t exist, because it is Graphic Robotics’ and other system integrators’ task to develop the robot cell so it can be run via a user-friendly interface.

Collaborative Process Robot Cells Can Be Used in Many Industries

Printing is just one industry that requires sophisticated process robot cells with on-the-run operator corrections. The demand for advanced collaborative process robot cells will increase dramatically in the future, simply because the robots’ ever more powerful controllers will expand the possibilities for making such applications.

We have decided to brand this concept Cobots 4.0, so the new shift in robotics will be real collaborative process robot cells, and they are already here, because Graphic Robotics has them. 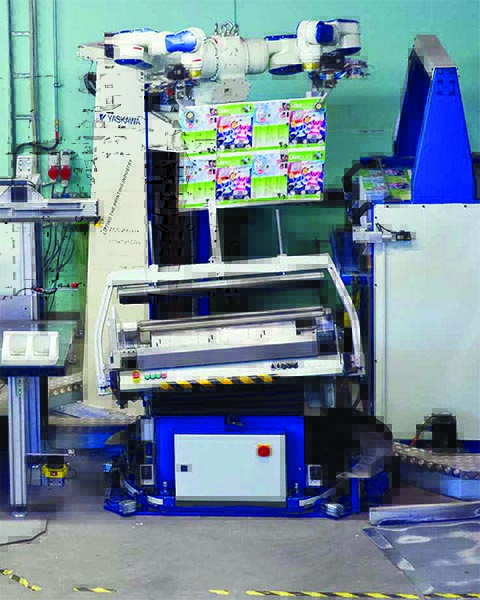