The top-level results from the 7th drupa Global Trends Report 2020 look at how print businesses fared globally in 201219, what their outlook for 2020 is (pre-COVID-19), and what market, technology, and socioeconomic trends are impacting them.

By WhatTheyThink Guest Contributor Published: May 11, 2020

It pays to be an optimist in print and most of the drupa expert panel are just that. Nearly eight hundred printers and suppliers found the time in their busy lives to answer our 7th annual survey, conducted in November 2019—i.e., before the coronavirus outbreak. Globally there was a net positive balance of 17% more printers who described their company’s economic condition as “good” compared with those that reported as “poor” (see Chart A). That net balance was even stronger for Europe (+25%) and North America (+54%) but confidence had fallen in the remaining regions. It was a similar story for suppliers for Europe and North America, though they reported a far better net positive balance for 2019 in the developing regions; with the Middle East +45% higher, South/Central America +35% higher, Africa +30% higher, and Asia +25%. 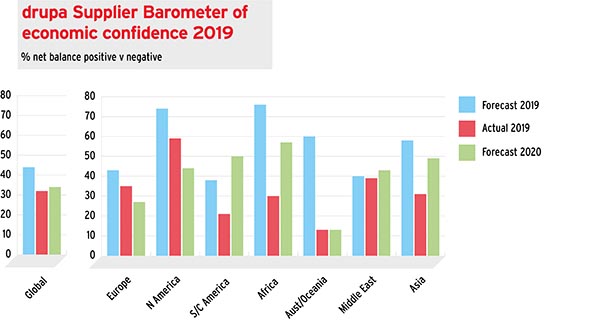 Chart B: How have your company‘s revenues/prices/margins/utilization changed over the last 12 months? 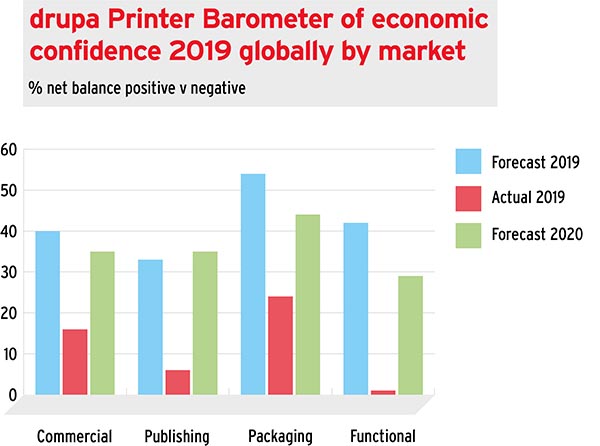 If we look at the regions over time (Chart C), then North America stands out as buoyant over the whole seven years, Europe improving steadily until 2018, and the remaining regions in decline, with the encouraging exception of Africa that has turned up this year.

The suppliers share the same concern over the regions and mark down their forecasts for next year even more sharply than the printers, though they are modestly more optimistic for Africa, Asia and the Middle East than they were last year.

Chart C: How do you rate the current economic situation of your company? (Actuals) 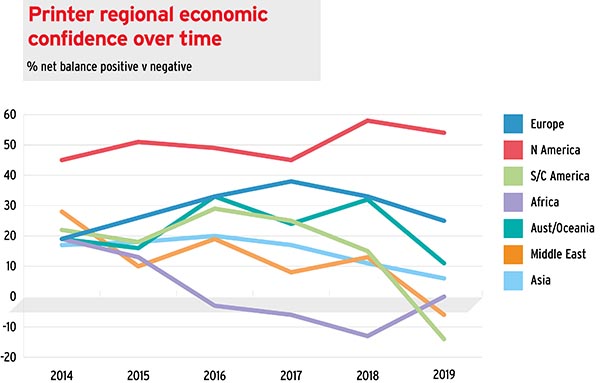 In most years, the suppliers have been more realistic in their forecasts—i.e., less tendency for over-optimism or negativity, though as can be seen from Chart D they did get overexcited in 2017. Nevertheless, it is remarkable how closely the global reports of actual economic confidence from so many printers and suppliers have been so similar year-on-year. The pattern is clear. First came slow but steady recovery in confidence from the double hits of the 2007/8 global recession and the impact of digital media. Then since 2017, a lowering of expectations largely as a result of increasing concern over broader socioeconomic issues such as political instability, global trade wars, etc. The coronavirus outbreak undoubtedly reinforces that slowdown, though hopefully there can be a relatively speedy recovery.

Chart D: How do you rate the current economic situation of your company? (Actuals) 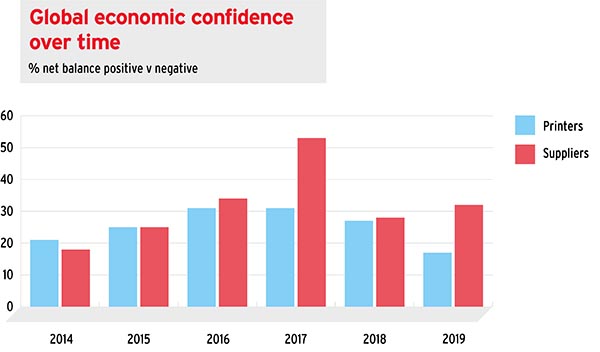 Clearly, confidence levels vary by market sector, with packaging leading andpublishing some way behind as shownin Chart E. Indeed, one of the features of open-ended replies, when asked what arethe best opportunities in 2020, was thenumber of companies hoping to diversify intothe packaging or functional sectors fromcommercial or publishing sectors. Nevertheless,all markets are impacted by broader socioeconomic factors as evident from the trend shown over time.

Chart E: How do you rate the current economic situation of your company? (Actuals) 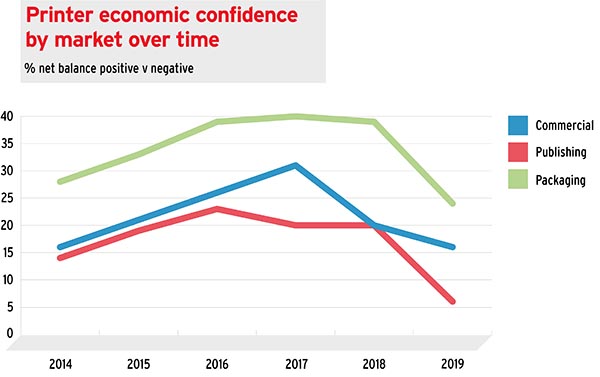 If we drill down into the financial performance data over time for the three largest sectors (Chart F), we can see that, in all cases, printers manage to sustain performance despite unremitting pressure on margins by increasing utilization and therefore revenues. Consequently, over the period, the pressure on prices has been slowly reduced.

Chart F: How have your company‘s revenues/prices/margins/utilization changed over the last 12 months? 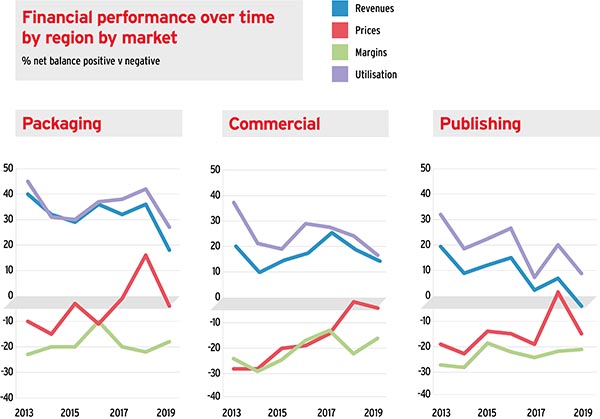 The transition to digital print is slow but steady and whilst conventional (non-digital) print processes still provide the major cashflow for most printers, it is digital technologies that show more rapid growth in most sectors (Chart G). The exception is packaging, where flexo and sheetfed offset continue to thrive.

Chart G: How would you assess your printing volume has changed in the following technologies over the last 12 months?

The printers surveyed all know that they must continue to invest if their companies are to succeed in the long term. Hence, all regions reported net positive balances in both the actual capital expenditure trends for 2019 and their forecasts for 2020 (Chart H). The same was true by market sector, though, not surprisingly, packaging showed the strongest net positive balance for 2019 at +30%, followed by functional at +25%, then commercial +23%, and finally publishing + 16%. Fifty percent of printers plan to invest in finishing, 48% in print technology, and 34% in prepress/workflow/MIS. 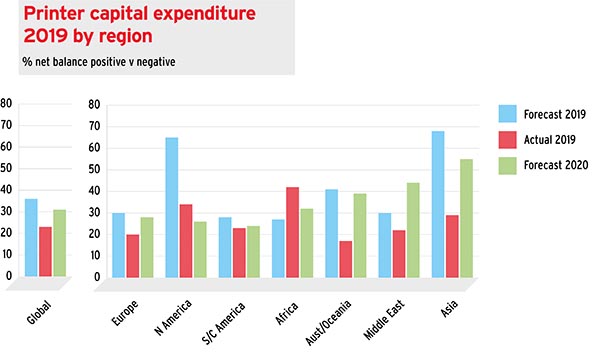 It was striking that despite digital print technologies showing the greater volume growth in commercial and publishing sectors, sheetfed offset was the second most popular press investment planned for 2020 (22% and 25%, respectively), only behind digital toner cutsheet color (26% and 27%). For packaging, it was no surprise that sheetfed offset was the most popular (29%) followed by flexo (26%).

It was only in functional that digital completely dominated—digital wide format (roll- and sheetfed) was at 38% and digital toner cutsheet, mono and color, were both at 23%.

As for supplier capital expenditure plans, they vary greatly by region, with North America, Africa, and Asia expected to do best. New sales channels are the most popular spend target, followed by raising efficiency and enhancing existing products. Given that drupa was planned for 2020, it was to be expected that new product launches would increase in 2020.

For the first time, we asked specifically about the broader socioeconomic pressures, and there were two clear patterns reported across the globe. For the developed regions, the focus was concern about the risk of, or reality of, economic recession in the country or region, followed by concern about global trade wars and the impact of global warming/environmental pressures. For the developing regions, it was corruption and political instability creating economic recession that dominated. Most regions reported that market pressures were more important than these socioeconomic pressures, although in the case of several of the more badly affected developing regions, this was clearly more arguable. Perhaps not surprisingly, suppliers gave very similar replies to these socioeconomic questions. The impact of the coronavirus outbreak will add to these concerns for all.

Turning to the specific market sector trends, for commercial printers, the clear message is the need to diversify, both in the submarkets you serve and the services you offer. There is endless price and margin pressure and only by offering something different to fresh clients can you avoid the race to the bottom in commodity markets. Commercial printers in the developed regions have on average taken greater advantage of this opportunity.

There has been a decline in the proportion of printers who report that publishing is their prime market. In 2013, it was 28% and has declined steadily since then to 19% in 2019. As the proportion of commercial and packaging printers has remained broadly stable, this suggests that there is an active decline in the number of publishing printers. Digital book production is on the rise, whilst newspapers and magazines are in active decline. Many publishing printers are seeking to diversify, often into packaging.

Packaging printers themselves face challenges, particularly those using plastic substrates in the face of a global campaign against single-use plastics—an opportunity for those using fiber-based substrates. Those using plastics are seeking more environmentally friendly options. The proportion of SKUs that specify digital print is growing steadily across the globe.

Most of the functional printers who participated in the survey have diversified into that market and it is clear that they find the growth opportunities attractive as the proportion of total turnover that is functional print has grown fast. Textiles were mentioned as an attractive and rapidly developing field. Whilst screen and pad are still common print technologies, toner and inkjet digital are now the most common technologies.

In conclusion, we must remind you that the survey was conducted before the coronavirus outbreak. Add to that the fact that the global economy is past its peak in recovering from the previous recession, and the global print industry, so closely aligned with advertising, is feeling the downturn. The developing regions have the additional challenges of corruption and political instability—indeed some might argue that the developed regions also suffer from these. However, looking at the longer term, and beyond the impact of the coronavirus, the industry has adapted well to the challenge of digital communications.

That is not to say that there is not neverending pressure on prices and margins, but for those who invest wisely, bring their costs down steadily by increasing productivity, diversify or at least innovate with new products and services, and invest in their people to create an enthusiastic and committed team, they will prosper. What better place is there to explore how best to turn those principles into practice than drupa 2021 in Düsseldorf, April 20–30? See you there!

“Climate change is a global threat that is going to affect every industry, most negatively, followed by political unrest and growing nationalism. Socioeconomic problems are impacting our business in South America, Central America, Hong Kong, and the list just keeps growing.’ —Supplier, commercial market, N. America

“Looking forward to the impact of the drupa show.” —Supplier, Packaging, N. America 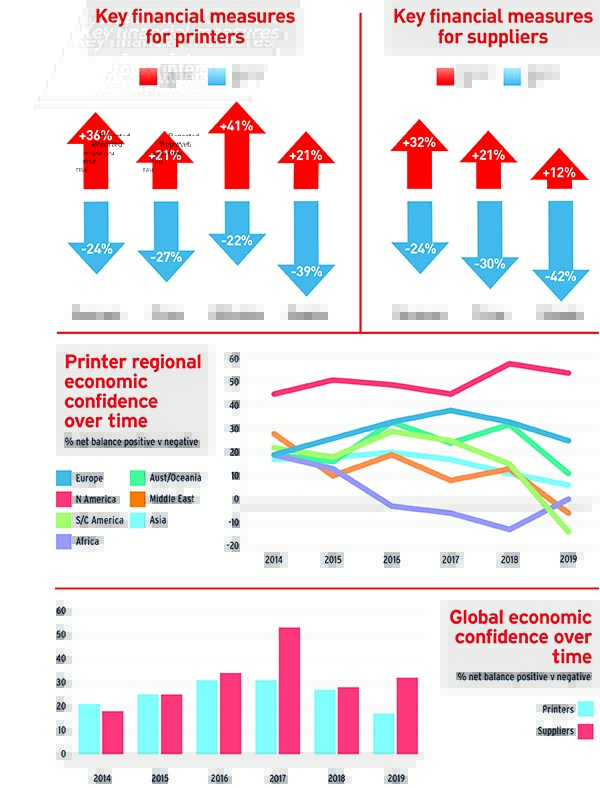 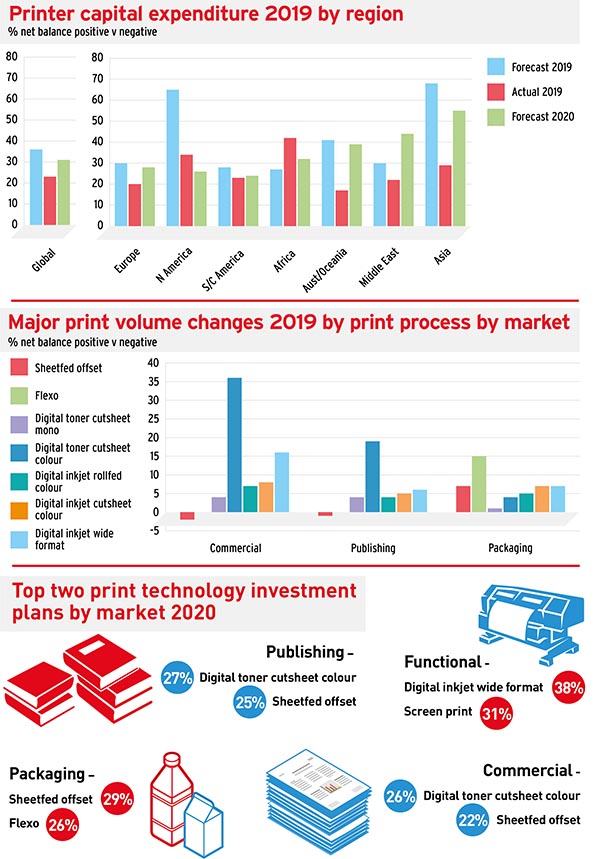