New York City – SNA Displays has been selected as the primary LED display provider for American Dream Meadowlands, the biggest mall in the United States and one of the largest indoor/outdoor retail and entertainment venues in the world.

The massive site is spread out over three million square feet, and some venues are already open for business.

SNA Displays will supply more than 40,000 square feet of LED display technology throughout the American Dream campus and will continue rolling out dozens of indoor and outdoor digital displays into the Spring of 2020.

The huge retail and entertainment project will feature 39 dynamic LED displays manufactured by SNA Displays throughout the property, including one at the Nickelodeon Universe® theme park, another in the family entertainment center KidZania, as well as multiple large-format exterior displays visible to the heavy traffic on I-95, Route 120, and Route 3.

“American Dream is without a doubt one of the most rewarding projects for us due to its unparalleled visibility in the New York and New Jersey markets,” said Jason Helton, executive vice president for SNA Displays. “With dozens of displays totaling more than 40,000 square feet, the coordination and management of this project is challenging but extremely rewarding. We’re humbled to be part of such a historic opportunity in our industry.”

Additionally, American Dream is splashed with dozens of LCD kiosks, also provided by SNA Displays, spread throughout the property with more slated for 2020. All kiosks and LED displays will be managed by SNAPros, a team of service and technical experts at SNA Displays.

All media sales are managed by BOLDSITE Media.

“From entry to exit, the integrated network of digital displays being developed at American Dream will deliver an immersive media experience to audiences at this unique destination,” said Bob Johns, president of BOLDSITE. “We’re thrilled to be working with SNA Displays on this one-of-a-kind development.”

SNA Displays partnered with industry-leading technology solutions provider Diversified for one of the venue’s most notable LED displays. The flagship digital in the Nickelodeon Universe® theme park is a curved LED column that welcomes visitors to the indoor park. Standing 26’7” high, the display features a 4 mm pixel pitch and more than 3.2 million pixels. 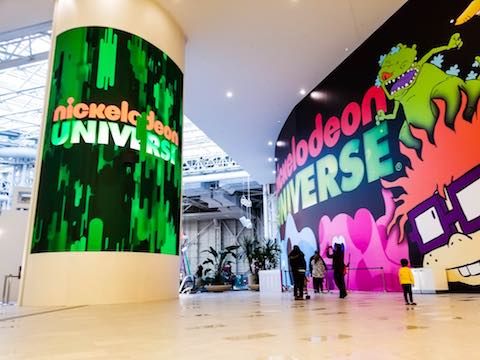 Diversified and SNA Displays are also teaming up to provide two large-format displays for the DreamWorks Water Park.

The largest LED screen at American Dream will be an exterior MEGA-SPECTACULAR display on the exterior of Nickelodean Universe®, featuring more than 11 million pixels. All exterior LED displays will vary in pixel pitch from 6.67 mm to 16 mm.