As the old song goes, ‘It’s not where you start, it’s where you finish’, a piece of popular wisdom that Preston-based Display Wizard has empirically experienced this year.

Issues such as colour consistency and increased volume of printed output were boxes ticked with the arrival of a new industrial UV printer in April. However, that’s when another set of issues came to the fore. Display Wizard simply couldn’t keep up with its new 3.2m wide printer because it was still finishing by hand.

“We had a real bottleneck,” says Managing Director, Peter Symonds. “ I’d go downstairs to the print room only to find that the printer wasn’t running, but it wasn’t the problem, it was the finishing. We couldn’t cut fast enough. I wanted to see the printer running continuously, which is when I suggested we needed to buy an automatic cutter. It’s a nice touch to say we cut by hand, but it’s not accurate enough and it’s too slow,” he says.

Esko at CMYUK
After speaking with industry peers and colleagues, Peter approached Sue Hayward, Senior Digital Consultant at CMYUK, a business contact he already knew and trusted. CMYUK is the UK’s largest, independent supplier of wide format digital printers, cutters and materials. It is also the exclusive distributor for ESKO Kongsberg finishing equipment in the UK.

Sue invited Display Wizard to the CMYUK Shrewsbury demonstration centre, where the Kongsberg X24 sign starter bundle was put through its paces. “The Shrewsbury showroom is pretty impressive,” says Symonds. “There’s a lot of knowledge there and they really looked after us. The cutting table performed really well and the price was good,” he adds.

The Esko Kongsberg X24 starter bundle is specifically designed for handling a wide variety of materials and applications for signage and display production. The configuration chosen by Display Wizard includes a MulitCUT tool head combining all tool insert options which here includes a router, kiss-cut and drag knives. The tool head is equipped with a highly robust, air-cooled milling spindle, which spins at up to 50,000 RPM. This combination of high power and efficient cooling makes this system highly suitable for PSPs that need extended milling duty cycles and/or who work extensively with heavy-duty materials (thick sheets of acrylic, wood/MDF and aluminum composite materials). A camera system that provides vision cutting is also included here plus an integrated conveyorised roll-to-roll feeder.

“Display Wizard came along to the demonstration with a very specific mandate – to improve efficiency,” says Nick Reed, Esko Business Manager, CMYUK. “We discussed their current workflow to better understand the best configuration, not only of hardware, but software solutions too. Looking at the type of work they were manually producing, it soon became evident that our iCUT Suite product would massively improve the pre-press workflow, automating the paneling of large pop-ups with functionality including adding bleed, registration marks and generating cut data with a couple of clicks of a mouse.

“iCUT Suite also links seamlessly with the Kongsberg digital cutter, so all the operator has to do is press go on the keypad and the job is produced. Utilising iCUT helps Display Wizard eliminate errors and ensures consistency of quality of the products, whilst simultaneously speeding this process up.

“Display Wizard could tell immediately that the build quality of the Kongsberg X24 was extremely robust, they were looking for a machine that would last well into the future and one that would provide the ability to upgrade tooling options as they grow the business into different markets,” he said.

Greater capacity, better customer support
By hand, an experienced finisher at Design Wizard could cut a 30m roll worth of pop up drops in 1.5 – 2.00 hours. When visiting CMYUK, Symonds and colleague Paul Jenkinson Display Wizard’s production manager took an identical roll of printed pop up material where it was loaded onto the Kongsberg X-24 system. The roll took just 13 minutes to cut.

“I think now with the combination of our new cutter and printer, I'd say we are probably tripling what we used to do, and that I think, is probably quite conservative,” says Symonds.

As well as speed, the X-24 has given the company far greater versatility, allowing it to better serve its customers. Prior to its installation, if a customer required, for example, a replacement panel for a five panel pop-up, the client would need to return everything, so that the new replacement hand-cut panel could be matched against the existing panels, and even then, there was room for human error. “Now,” says Symonds, “we can say that the drop is going to match perfectly because the Kongsberg will cut out exactly the same as it did last time. So if we ever have to reprint a section for any reason, we can do so with ease.”

Versatility and new capabilities
The X24 was installed by CMYUK in June this year, and by September the company registered a record-breaking month – its best ever, followed again by a blockbuster October. Currently, 95% of its Display Wizard’s work involves cutting drops from roll-fed media, however, what Symonds is noticing is new types of work coming through.

Recently, the company has produced acrylic iPad holders and headphone mounts through an events agency for a Police recruitment roadshow. “We used the X24 to cut out pieces of acrylic and produce drill holes which were millimetre perfect,” he says.

The company is also producing shaped Foamex, an application it tended to shy away from in the past. Also too, Display Wizard has started to take-on long-run poster work, something again, it purposely avoided back in the hand cutting days. Now the company is able to cut 100 A4 posters in less than ten minutes.

By Symonds’ own admission, some staff members at Display Wizard were initially sceptical about automatic digital cutting technology, however now; it's a different story. Says Symonds: “They say that in combination with our printer, the Kongsberg is the best bit of equipment we have ever bought.”

Display Wizard at a glance
Display Wizard has been supplying large-format print services for over fifteen years – from low-cost roller banners for start-up businesses to high-end exhibition stand design and build for blue chip companies. 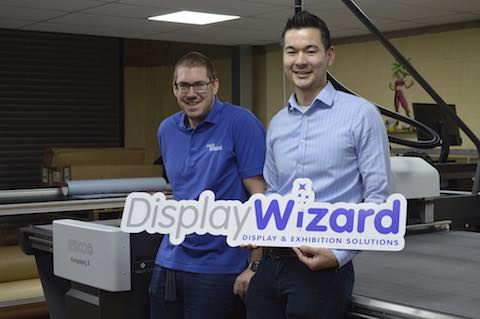