JV300 Plus, CJV300 Plus and CG-FXII Plus models include new features for productivity increases, cost-savings and sustainability

Suwanee, Ga. – Mimaki USA, a leading manufacturer of wide-format inkjet printers and cutters, today announced the launch of the Plus series in the Americas with the addition of the JV300 Plus printer, CJV300 Plus printer/cutter device, and CG-FXII Plus cutter that include features and functionality to drive workflow efficiencies. All three will be on display in the Mimaki USA booth 5216 at the PRINTING United show in Dallas, October 23-25, 2019.

“All three of these new Plus models build on the legacy of Mimaki core technologies offering customers confidence that the engines of their business efficiently deliver consistently outstanding results,” said Michael Maxwell, senior manager at Mimaki USA. “These enhancements bring next-generation functionality to popular models in our line-up to boost productivity, deliver superior print quality, and provide options for printing in a more eco-friendly manner.”

Plus brings print workflow enhancements to JV300 and CJV300 models

The JV300 Plus and CJV300 Plus series now include the following features.

Mimaki Advance Pass System 4 (MAPS4) is the latest version of the Mimaki Advanced Pass System that utilizes an advanced algorithm pattern to reduce banding and delivering output that looks spectacular even at higher speeds. Combined with Mimaki Variable Dot Technology, the resulting prints are smooth, even in the mid-tones, solids and gradients.

For print service providers that prefer a distributed working environment, The JV300 Plus and CJV300 Plus models now include Ethernet connectivity, enabling equipment to be placed where it’s best used to suit specific production requirements.

New Mimaki Eco-cartridges are designed to ensure a more sustainable printing process for customers who prefer the 440 ml cartridge ink delivery system. The Eco- Mimaki USA introduces workflow improvements with Plus series printing and cutting solutions cartridge is reusable, can be replenished by the user with a replaceable 600 ml ink bag, and provides larger run capacity and 15% savings in ink costs when compared with the 440 ml cartridges. Eco-cartridges can replace any 440 ml cartridge, and when used with the company’s SS21 ink set, can be combined with White or Silver ink (both available in 220 ml standard cartridges) to create high value-added print products; or with Light Cyan, Light Magenta, and Orange for high-quality images that benefit from an extended color gamut.

ID Cut a new Plus

The company’s proprietary ID Cut function now supports automated cutting on the CJV300 Plus printer/cutter and the CG-FXII Plus cutter. This innovative functionality was developed to enable continuous cutting operations on multiple jobs, with minimal human touchpoints. The ID Cut function is included in Mimaki RasterLink 6 Plus RIP software; along with registration marks, the software adds a bar code on the print. The barcode, read by the crop mark sensor on the CJV printer/cutter or CG-FXII Plus cutter, contains cutting and rotation information enabling these devices to automate the cutting process. This function is particularly useful when running nested print-cut jobs, as the printer continuously reads the data for both single and ganged jobs. With this functionality, print service providers can choose the workflow that best suits their production requirements: select a CJV300 Plus printer/cutter as an all-in-one device, or pair a JV300 Plus with a CG-FXII Plus for separate print-and-cut functions.

In addition to the above, the maximum pressure on the CG-FXII Plus cutter is now 500g, enabling it to cut thicker material such as reflective vinyl for safety signage and vehicle graphics, sandblast matt, paint masking for aluminum signs, and more. Pinch rollers -- standard on these and legacy CG-FXII models -- work with the ID Cut feature to ensure precise cutting without the media traveling. 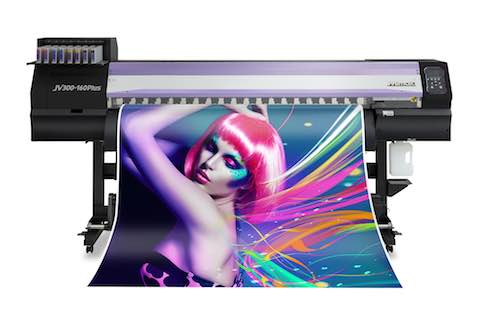