Although Karibu officially premières on 14 May 2019 at Fespa in Munich, around 100 selected people already had the opportunity to see the new swissQprint roll to roll printer in April.

swissQprint continues to keep tight wraps on information about its first roll to roll printer, Karibu. To date, the Swiss manufacturer has only published outline details on its website and in social media.

Exclusive preview presentation
In April 2019, swissQprint opened the doors to its development department for a select circle of around 100 visitors. Spread over three days, they had opportunity to check out the printer ahead of its official launch. In addition to the new machine itself, swissQprint also demonstrated its wide range of applications. The company reports feedback as positive to outright enthusiastic. "They have built exactly the roll to roll printer I wanted," was how one customer summed up his impressions.

Official launch
swissQprint invites the specialist community to stand H30 in Hall A5 of Messe München, where Fespa 19 will take place from 14 to 17 May 2019. In addition to the première of the Karibu roll to toll printer, swissQprint will present its current flatbed range and a variety of inspiring printing applications. 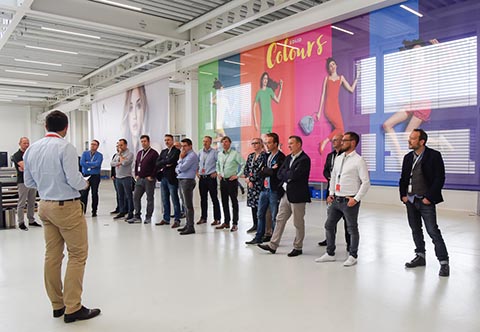