Mobile, Ala. – Xante' today marked a milestone accomplishment for the company with the announcement of a major release of iQueue®, its flagship Adobe® PostScript® PDF workflow software. “Today iQueue 13 opens an entirely new aspect of the commercial printing industry for us and for our customers. Complete preparation and printing of mail jobs is now more powerful, simpler, and much more economical than ever before,” said Robert Ross, President and CEO of Xante'. “iQueue 13 has made mail prep just as easy as we've made envelope printing.”

With Xante's iQueue 13 workflow software, commercial print providers may now import their clients' mailing list, scrub, sort, and update it for change-of-address within seconds. The addresses process quickly through iQueue's powerful cloud servers containing the USPS CASS and NCOALink databases. Additionally, the iQueue software will generate and print the USPS Intelligent Mail Barcode (IMb) on every piece for maximum discounts and assurance of accurate delivery. All required USPS documentation for the mailing is instantly created and filled in with the mail preparer's information and pertinent data about the mailing. The preparer may submit the documentation electronically to the USPS data processing network directly from a link within iQueue.

Easy Importing, Placement, and Printing of Variable Data with iQueue 13
After processing the list through the USPS network for address and change-of-address accuracy, the commercial print provider can easily incorporate the list into an existing job through iQueue's Variable Data engine and printing begins almost instantly. The new version includes a selection for CASS-certified variable data and automatically formats an address block, including the IMb barcode, that meets USPS standards. Placement of the variable data on the piece is merely a “drag and drop” operation within iQueue. The iQueue-powered Xante' digital press prints the entire list in the required order (or reverse order) for accurate sorting into trays or sacks depending on the job. A convenient separator page can mark the divisions between each tray or sack. New enhancements to the processing of variable data enable the digital press to produce prints even faster than earlier versions of the workflow software.

Simple One Click Checking and Correcting Addresses with iQueue 13
After scrubbing the list, iQueue 13 allows the mail preparer to review and correct any addresses that were either partially or completely incorrect. A convenient link to Google search is embedded in the same window with the returned address results. Once corrected, one click is all that's needed to resubmit the list again for reprocessing. If any addresses are still found lacking in some detail, iQueue 13 allows the mail preparer to decide whether to print them for manual handling and posting or to simply exclude them from the mailing entirely. In either case, a complete list of all addresses, accepted as well as erroneous ones, may be exported for the list owner.

Available at No Cost for First 12 Months of Use
Use of the mail preparation features of iQueue 13 will be available to Xante' customers free of charge for a full twelve months from date of first use. The subscription will include unlimited use. “We have now made our 12,000 iQueue users fully functional direct mail providers,” Ross remarked. “Our development team has succeeded in producing a top tier solution that makes preparing direct mail simpler and faster than ever for them. We've also made it incredibly affordable for any print provider who already processes bulk mail or wants to begin offering this service to their customers.”

iQueue 13 is available now for download from the Xante' website at www.xante.com. The workflow software runs on any Windows 7 PC or later and is compatible with Xante' products. 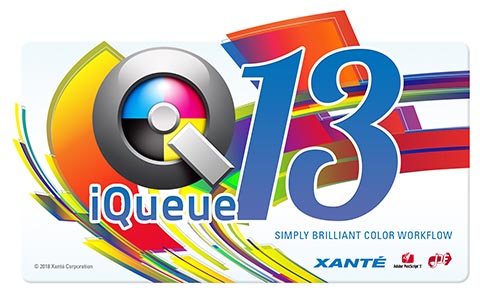