He succeeds Werner Naegeli who is retiring after nearly 30 years of service. 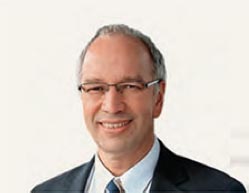 Thomas has been involved with the graphic arts industry for more than 20 years, beginning his career as a strategic planner at Eastman Kodak in Germany in 1996. He then spent almost 15 years with Heidelberg Druckmaschinen, starting as head of finance for the postpress division before managing the entire division with full profit and loss responsibility.

Thomas joined Muller Martini in 2017 where he played an integral role in the acquisition of the Kolbus bookbinding business. In 2018, he became a managing director at the Rahden facility in Germany and helped transition the Kolbus portfolio as well as its personnel into the Muller Martini Group.

Thomas received his degree at the University of Ulm in Germany where he studied mathematics and business administration. He also attended New England’s Worchester Polytechnic Institute. In addition, he has studied general management at Switzerland’s St. Galler Business School and marketing at INSEAD business school, France. He recently relocated to Long Island, New York, where he works out of Muller’s U.S. headquarters in Hauppauge.