The local franchise of a national sign and graphics company has been recognized as one of the chain’s top-performing locations.

FASTSIGNS of Grand Rapids, at 3582 29th St. SE — a franchise of the Carrollton, Texas-based FASTSIGNS International — has been ranked No. 5 out of the company’s more than 700 locations in nine countries.

The local franchise was recognized at the 2019 FASTSIGNS International Convention this month in Orlando, Florida.

“With so many centers in the network, this distinction is very humbling,” said Mike Gilpin, president, FASTSIGNS of Grand Rapids. “This award reflects our entire team’s hard work and dedication to helping businesses and organizations solve their visual communications challenges in our community every day.”

The Grand Rapids franchise was presented with the Sales Achievement Award, which recognizes the top five centers that achieved the highest sales volume in the U.S. and Canada between Oct. 1, 2017 and Sept. 30, 2018.

In addition, account manager Alex Cook was awarded a Circle of Excellence Award for outstanding sales. 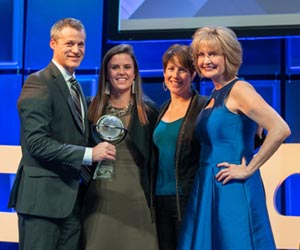