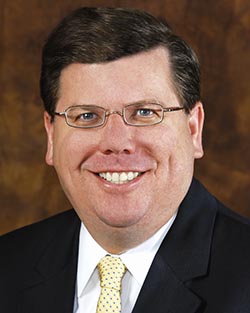 Washington, D.C. – On January 16, 2019, President Donald J. Trump sent the nomination of Robert C. Tapella to be the Director of the U.S. Government Publishing Office (GPO) to the U.S. Senate, which recently convened as part of the 116th Congress.

Robert C. Tapella of Virginia, to be Director of the Government Publishing Office
Mr. Tapella recently served as professional oversight staff of the Committee on House Administration of the United States Congress with expertise in the areas of printing, publishing, and security credentialing. Mr. Tapella led a review of Title 44 of the U.S. Code, which outlines the role of public printing and publishing of documents in the Federal government, as well as the Federal Depository Library Program. Mr. Tapella served as the 25th Public Printer of the United States under President Bush and continued his service under President Obama. He began his career as calligrapher, illuminator, and bookbinder, and later ventured into print brokerage and direct mail businesses. Mr. Tapella, a 1991 graduate of Cal Poly San Luis Obispo with a B.S. in graphic communication, was designated as an honored alumni in 2008 and presently serves as chairman of the Dean’s Council on the library, and is also a member of the graphic communication department advisory board.