At marcolor, color is more than just part of the firm’s name. Take a look at the website of this young company—which is just over two year’s old—and what you’ll find is freshness, innovation and inventiveness, together with the slogan, "we love print". Few people can make such a claim as convincingly as the managing director, Marc Thullen. For many years he was the production manager of what was the Stuco printing plant in the small Eifel town of Speicher but then, in the spring of 2016, such is his belief in the future of print, he bought the printing operation from Stuco, renamed it marcolor, and now runs it as an independent. UV waterless offset is one of marcolor’s key production technologies and since 2017 it has relied on the Zahara plate from Verico Technology.

Advertising materials are very much a part of the printing industry, and in many cases are individually designed printed objects. The plant was already focused on this market before its transition to marcolor, but then printing on metal represented a significant amount of its work whereas now the focus as switched almost totally to plastic substrates. As a result of this switch marcolor has added the ability to print on wood veneer and cork to its portfolio.

The key factors in the success of marcolor have been this substrate know-how coupled with precisely the right printing and finishing method for the job. Marc Thullen: “We put a lot of work into selling and providing advice, with the emphasis being on the range of substrates. Take the just the self-adhesive segment, for example. There is a whole variety of different specifications, starting with different thicknesses of adhesive, films vary greatly in their temperature resistance and then there are environmentally friendly materials.” And that’s just stickers. Thullen continues: “The customer simply tells us what it wants to do with the stickers and then we recommend precisely the right materials.”

When Stuco decided to review its positioning and production Marc Thullen saw his chance. After he had taken a very close look at the market and its opportunities, marcolor came into being on May 1, 2016. As a master printer trained in UV offset who had already worked in production for many years and who had also gained considerable experience in screen printing, he explains: "I could clearly see that the company had a good future.” However, some investment would be needed—in order to improve its positioning in printing on plastics in particular. “We were already highly specialized but still somewhat more broadly based. So, for example, we also handled pad and textile printing in house.” Pad printing has been shut down and textile printing reined back. The focus now is on UV waterless offset and screen printing or, in many cases, a combination of the two for POS articles and advertising materials. Besides a whole variety of different stickers, production now includes plastic products such as door swingers for hotels, self-adhesive mousepads and countermats, or promotional rulers and bookmarks—all of course completely individual and tailored to the customers’ requirements. marcolor is particularly strong when it comes to POS articles such as shelf signs or wobblers, as well as stickers that are readable on both sides.

The company is able to bring all its expertise in printing on plastics to bear on data wheels and sliders. These really are products where a great deal of advice is called for or that are even jointly developed with the customer. Sometimes, the customer will only initially come up with sketches or a vague idea. If marcolor is then asked to help realize the project it is happy to do so. “We examine the product’s requirements together with the customer and then handle the whole project right up to delivery.”

As much as possible in house

marcolor began with 16 employees, who had previously worked in the printing operation for many years. All the old machinery was also acquired.

Following the takeover there was investment in prepress amongst other areas. “For the platesetter we switched from an Italian manufacturer to Heidelberg. The Suprasetter A75 arrived a year and a half ago and has been running smoothly. A new, fully automatic SPS Vitessa XP screen press was also added."

marcolor’s goal is to handle as many services as possible in house. Marc Thullen also keeps all the production in Germany. Advertising articles are finished by a team of homeworkers based around the printing plant in Speicher in the southern Eifel. "I don’t think there’s anything to be gained by sending stuff out of the country in order to finish things off cheaply, only to bring everything back here and then sell it as a German product.”

Even a big order such as the production of 40,000 multi-part wheels, which was developed from scratch by marcolor in conjunction with an agent, has recently been hand finished by homeworkers. In fact, the Eifel plastics specialist can offer a comprehensive range of services that is capable of holding its own against Asian competition, and it is clear that marcolor has succeeded in its drive to find the best combination of automation and handwork. Time is also a factor favoring homeworkers, and another requirement is for an extensive stock of raw materials. Marc Thullen: "Jobs often need to be completed with five or six days and I need pretty much everything to be in stock.”

Proud of his team

Newly minted entrepreneur Marc Thullen is very proud of his experienced team. Cohesion and readiness for action play a big role at marcolor. One strong point is that the mix of ages amongst its employees means that it is able to draw on not just an enormous body of experience built up by staff who have worked at the plant for decades but also new attitudes and up to the minute knowledge contributed by recent hires.

The three most recent apprentices were all taken on and continue to work at marcolor. Marc Thullen is currently looking for two motivated school leavers who want to make a start in the printing industry and who are ready to tackle a wealth of absorbing challenges.

Even more environmentally friendly with the Zahara plate

In terms of equipment, the company is built around its UV offset and screen presses. For a number of years, Marc Thullen and his team have relied on the Koenig & Bauer Genius 52. "We continue to be very satisfied with it”, he reports.

marcolor took an important step towards even more environmentally friendly production in 2017 when it switched to the new Zahara plate from Verico Technology. Erich Merklinger, who is responsible for estimating and purchasing at marcolor: “The plate offers completely chemnistryfree processing. This is an important point for us and Verico really convinced us: the Zahara plate requires just water and a pair of brushes.” Downstream from the Suprasetter there is a Könings KTW 653, which now uses water rather than the wash-off liquid that was previously required. Offset printing at the Speicher-based company was already waterless and therefore alcohol-free, and so the switch represents a continuation of this cleaner approach.

Erich Merklinger, who is himself a trained printer, admits that there was scepticism at first. However, all the people involved in platesetting and in using the plates on the press were won over pretty quickly. The Verico Zahara is described as stable and very hard-wearing. The switch itself went really smoothly. For a short time marcolor ran the two plates in parallel until the old plate stocks had been used up.

In the course of an eight-hour shift, the company produces some five or six jobs on the Genius, and the appropriate plates need to be made for each of these. marcolor has had independent tests carried out by the Institut für Arbeitsschutz to confirm that every aspect of platemaking with the Verico Zahara plate—whether it be setting or developing—is environmentally friendly.

In the wake of the switch to the new setter technology and the new Zahara plates the workflow was simplified. A special storage facility for plates has so far not been necessary. “We order the new plates and they arrive from the supplier’s warehouse in the Netherlands within three days”, reports Merklinger. Things run as smoothly here as the whole of the cooperation with the plate partner Verico Technology. Marc Thullen and Erich Merklinger have already worked with Verico’s service team for many years. Needless to say, the care is not limited to just the plates but extends things such as the supply of spare parts for the Könings wash-off unit.

On the right path

Marc Thullen, print entrepreneur by conviction, is well aware that there are still a couple tasks still be tackled, but after the first two years he can see that a great deal is running as he hoped it would. It is a good feeling for him to know that his workforce supports him on the path that he is pursuing. Returning to the order for 40,000 wheels: “The customer specifically asked for advice and support in developing the product and in the end it was discussed in such detail that the coordination and preparatory matching up took more time than usual. It is by offering such intensive and detailed advice that marcolor sets itself apart from its competitors. Marc Thullen: “The great thing is that this way we win more and more orders. Our approach works.” 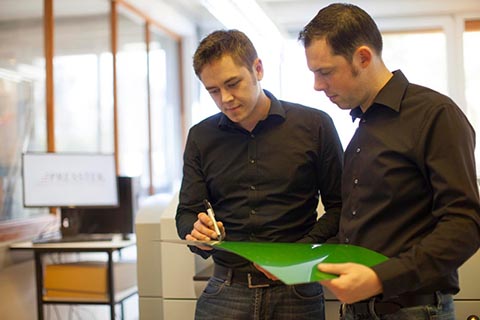