GPO Names University of Mississippi Library the Best in the Nation

Washington D.C. – The U.S. Government Publishing Office (GPO) names the University of Mississippi’s J.D. Williams Library as the 2018 Federal Depository Library of the Year. The library was selected for its creative promotion of Government documents through campaigns, exhibits, and events. The J.D. Williams Library became a member of the Federal Depository Library Program (FDLP) in 1883. The library is the Regional depository library for Mississippi, serving ten selective depositories in the state.

To coincide with its 135th anniversary in the FDLP, the library hosted a year-long Government documents campaign. As part of the campaign, the library created a Government documents coloring book and bookmark and hosted anniversary-related events featuring various librarians and scholars as guest speakers. It produced seven new LibGuides on Government information and displayed six exhibits throughout the library that pointed users to the depository. For children, the library developed educational materials and engaged middle-school students with direct programming.

“I congratulate the staff at the J.D. Williams Library for its innovative and steadfast efforts in Keeping America Informed on the three branches of the Federal Government since 1883,” said Acting GPO Deputy Director Herbert H. Jackson, Jr. “The library has demonstrated a rich legacy of service and learning. It serves as an example of the critical relationship GPO has with the library community in providing the public free access to Government information in digital and print formats.”

“UM Libraries are proud to be included among Federal Depository Libraries,” said Cecilia Botero, Dean of Libraries at the University of Mississippi. “The ability to offer the UM community and the people of Mississippi free public access to these vitally important government documents is a responsibility we take seriously. We are honored to be chosen as the 2018 Federal Depository Library of the Year.” 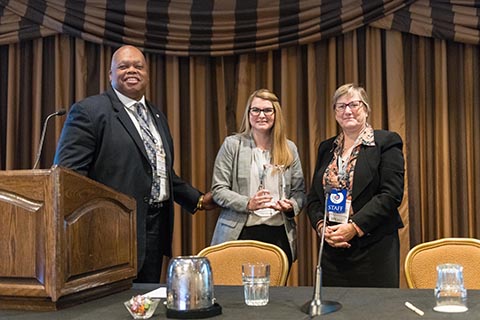