Welshpool, U.K. – For more than 50 years, Welshpool Printing Group has served the United Kingdom by offering quality litho print solutions that have built its reputation as a trustworthy business partner and a provider of exceptional overall service. As the Mid Wales-based company has evolved and expanded its capabilities over the decades, growing to £3M annual sales, it has continued to seek ways to offer better solutions to its customers through continuous improvement efforts.

Recently, one of these solutions was to retrofit a Komori LS829P with an LED-UV curing system from AMS Spectral UV – A Baldwin Technology Company.

According to Ian Jones, director of WPG, the company was looking to decrease press downtime and eliminate marking on an 8-color Komori perfector it had acquired in 2017, with the goal of eventually equipping the press with an LED system.

“We decided to wait until the press had bedded in and was up and running, and for the operators to be confident on the press, before we added LED,” Jones explained, noting the Komori came with a conventional spray powder setup, which was they only ink-drying process they had ever used at WPG.

Jones said he first learned about LED-UV curing from his print engineer, who told him the technology was phenomenal, and that in 2017 when the company was looking to buy a machine, they had a chance to see a press equipped with LED-UV from AMS Spectral UV running and in action.

“I was wowed by how impressive it was,” Jones said, noting that this live demonstration solidified WPG’s interest in LED technology, and also in AMS Spectral UV as a potential supplier.

Additionally, according to Jones, his research and conversations with other printers indicated that “AMS was the best lamp on the market by far,” which led WPG to officially go with the industry-leading manufacturer when they decided to invest in an LED-UV curing system for the Komori perfector in 2018.

According to Jones, the purchase and installation process for the LED-UV system was easy – he said there were “no difficulties at all, from point of order to installation – the installation was brilliant and ahead of schedule, and AMS engineer Mark Burgess was great and helpful in any way possible.”

WPG’s press setup includes two XO Series™ lamps from AMS Spectral UV – one positioned in the interdeck just after the first 4 print units, and the second in the swan neck of the delivery. The company now runs silk, gloss, offset and plastics on the machine, producing everything from magazines to stationary for its discerning customers.

Regarding the change in printing process from a conventional spray powder setup to LED, Jones reports that the press operators were “shocked completely with how instantly dry the ink was on paper, and by how jobs without a gutter and with heavy ink coverage on both sides wouldn’t mark when we were perfecting … they also were surprised by how vibrant the color looked on paper.”

Jones said there was a small learning curve for operators: “With LED-UV, the ink and water balance requires a smaller window before emulsification, but we have good operators and they got to grips with it pretty quick.” He quipped about the changeover process: “It’s not as scary as I was warned about.”

When asked what the biggest changes since installing LED-UV have been, Jones pointed to the increase in productivity as being the biggest noticeable difference. “The LED has reduced the amount of day-to-day cleaning we have on the cylinders, swan neck and in the delivery,” he noted, adding that the pressroom is in general “without a doubt” cleaner since they no longer use spray powder on the Komori.

According to Jones, the press operators “love” running the LED-equipped perfector: “The lads running the LED press hate going back on our conventional 5-color,” he said, noting that “they find LED user friendly and feel that a lot of the headaches they used to have every day, have been eliminated by it.”

Regarding customer response, Jones reports that WPG’s customers are greatly appreciating the improvement in quality that LED-based printing provides. “The customers love the more vibrant images, and the difference in quality they are receiving,” he confirmed.

In terms of other changes, WPG’s turnaround times have improved since installing the LED-UV system from AMS Spectral UV, Jones said. “The finishing department can instantly start work, and LED has eliminated a lot of down time in the bindery as there is obviously a lot less cleaning to deal with – all the substrates they handle are instantly dry.”

Another time-saving benefit, he said, is that WPG’s operators “don’t have to wash the press up at the end of the week, as the ink won’t cure on the rollers or in the ducts.”

To other operators considering investing in LED-UV technology, Jones would offer the following advice: “From our point of view, the LED worked from day one and did exactly what it was supposed to. The ink and chemistry were the biggest learning curve, and the headache for me was finding the right products that suited us.”

The cost of investing in LED-UV isn’t small, but Jones summed up that it is in the long run worth it: “Obviously the initial cost of LED is expensive, especially because we bought two modules for our perfector, but the extra production we are getting – which is about 10 hours a week out of the machine – is more than helping recoup the initial cost.” 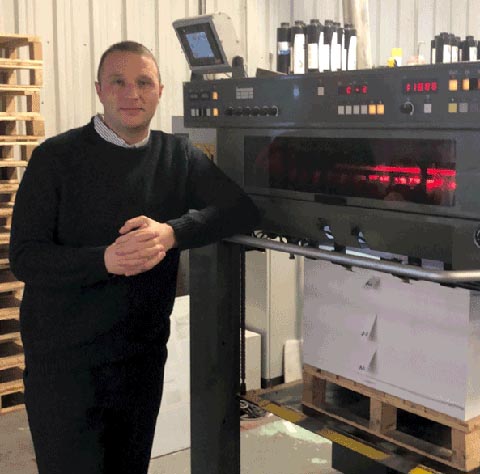