Infographic: Why Do So Many People Love Print on Paper? Because It’s Great for Learning and Retention…Without Health Issues!

Chicago, Ill. – Two Sides North America has released the third of three engaging new infographics on Why do so many people love print on paper?

The series of infographics highlights the most impactful results from U.S. consumer surveys conducted between 2015 and 2018 by Toluna, a global polling firm, and Two Sides North America.

The new infographic focuses on the fact that the majority of Americans agree that print on paper is preferred for learning and retention, especially when it comes to complicated materials. “We were also surprised by the strong response of the 18 to 24 year old group – 69% of which said it was important to “switch off” and enjoy printed books and magazines, and 62% being concerned about the health effects of increased screen time,” says Phil Riebel, President Two Sides North America.

The infographic is designed to bust key myths about the switch from paper to digital. The key facts below are highlighted:

Two Sides’ new infographic can be downloaded here. It is also available for co-branding by Two Sides Members, who may contact us for details. 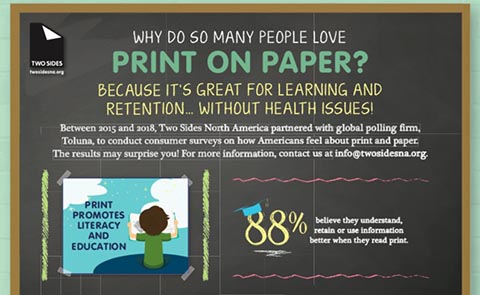