Clevedon, UK – At this year’s Sign and Digital UK, Roland DG showed up in force with a stunning range of print technologies for every kind of print professional. But that’s not all we brought – in partnership with Renault Sport Formula One™ Team, we were also able to offer guests the
opportunity to win a selection of F1 experiences.

Jayne Barton of Sign My Ride UK took the bronze medal and enjoyed a VIP Enstone Technical Centre Discovery experience. Renault Sport Formula One™ Team Technical Centre, hidden away in the Cotswolds, is the hub of the team’s chassis design and manufacturing.

In a highly-competitive industry, top engineers work behind closed doors on prototypes for the next generation of F1 cars and as such, the area is strictly off limits to visitors. “People can’t just walk in here and take a tour”, says Joe McNamara, Head of Graphics, “it just doesn’t happen.”

Jayne got to look behind the scenes of one of the giants of motorsport and see the enormous amount of work that goes into creating the fastest cars in the world. “We had an amazing day and would love to go back again,” said Jayne, “Joe was the perfect host he showed us everything.”

Tim Douglas of Moto Graphix took the second prize and got the chance to attend the British Grand Prix up the road in Silverstone. The Renault Sport Formula One™ Team F1 cars that whizzed past him at 200mph weren’t just adorned with stickers printed on the Roland TrueVIS VG-640 - there was more under the surface.

A percentage of the car’s bodywork is made of Rohacell®, a rigid, lightweight foam that forms the supportive cores for various components. Each of these cores is milled to precision on one of four MDX-540 milling machines by Roland.

The winner of the grand prize, Lakhvir Sahota, got to see Renault Sport Formula One™ Team in action, this time in the Hungarian Grand Prix. Lakhvir admitted that he wasn’t really a fan of F1 before travelling to Hungary but that didn’t mean he didn’t enjoy himself.

Besides getting the chance to see the race, he also got a behind-the-scenes tour courtesy of the team. He also had a photo opportunity with Renault Sport Formula One™ Team driver, Nico Hülkenberg. Thanks to his experience, he now has enough Formula One knowledge to compete with any super-fan.

Looking back on Sign and Digital UK, we’re glad to have showcased our wide portfolio of products and we’re also thrilled with the response to the competition. Now that the winners have claimed their prizes, we’re even more happy that we’ve helped give some Formula One fans experiences that they won’t forget. 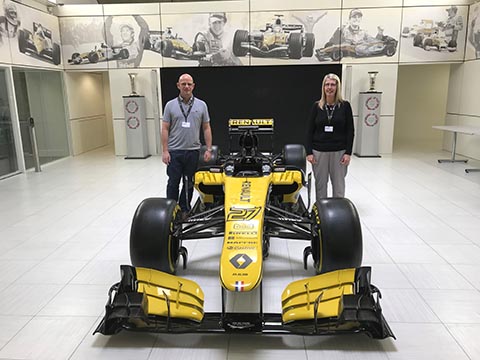