Bergisch Gladbach – Zanders is sending out a clear message of commitment to its Bergisch Gladbach location: The manufacturer of high-quality specialty papers and cartonboard is converting its on-site power plant from hard coal to natural gas and is investing several million euros in modernization. The conversion is part of Zanders' future-oriented investment program for sustainable increases in efficiency.

The power plant conversion alone promises a significant increase in efficiency in the production processes of the paper mill. In common with a gas grill, which heats and cools down much faster than a coal grill, a gas-fired power plant enables rapid changes of load. This will transform starting and stopping the paper machines into considerably more flexible and efficient processes as well as contributing to a longer service life of the systems. In addition, the previous coal-fired operation produced costs for the disposal of the ash. This expenditure will be eliminated completely and efficiency will be further enhanced by a simultaneous reduction in the overall cleaning effort. Regarding the CO2 balance, Zanders expects a reduction in emissions of over 40 percent.

"The conversion of two boilers in our power plant has mostly been completed. The gas has been flowing since the end of July and the commissioning of the first boiler is expected to be completed by the end of August, so that we will probably no longer need coal for the steam supply of our plant during normal operation by the end of September," explains Ralf Wenz, the power plant manager at Zanders. "We are now preparing the conversion of the third boiler, which will take about a year. By that time, both main boilers and the reserve boiler, and thus the entire power plant, will be converted to gas." According to Wenz, the total investment will amount to around seven million euros.

The conversion to gas represents the high point of a whole series of steps and measures with which Zanders intends to increase energy and cost efficiency in production in the medium and long terms: These include the gradual installation of new LED lighting throughout the plant; the insulation of the steam pipes as well as the optimization of the compressed air system. 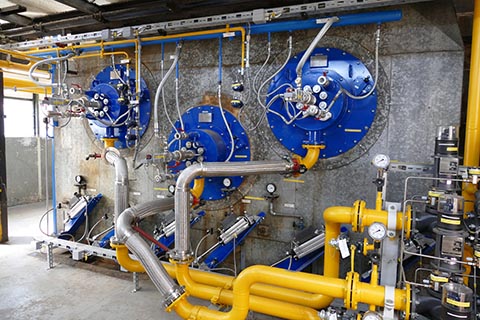 The gas has been flowing since the end of July: The new gas connections at one of the boilers at the Zanders power plant.