MAXSON offers a “low roll diameter” detection design that aids an Operator by automatically slowing a sheeter to a stop when a preset roll diameter is reached at the roll stand. 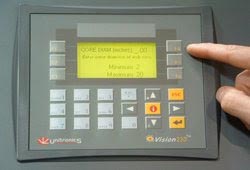 This feature allows the Operator to monitor other aspects of the sheeting process, yet still allows the line to stop before a roll completely expires thereby protecting the sheeter from damage caused by a flailing tail running through the cutter and the associated down time of rethreading a sheeter rather than splicing the leading edge of the new roll to the end of the old web.

The automatic tension system uses a proportional control design. A sensor fixed on the roll stand’s brake mounting plate monitors the number of rotations. Using these inputs, the controller calculates the diameter of the roll, lessening brake pressure automatically as the circumference reduces.

The “low roll” diameter is the size of the roll at which time a signal is sent to the sheeter drive to slow down to a minimum line speed. The Operator can set this parameter from the maximum roll diameter to the core diameter.

The “Stop” Diameter is the parameter at which the controller sends a signal to stop the sheeter from the minimum line speed it has been running since the low roll diameter had been achieved. The diameter can be set within the range of core diameter and low roll diameter.

The automatic tension controller and the "low roll diameter" detection can be easily retrofitted to any roll stand that is equipped with pneumatic brakes.