Bielefeld – BST eltromat successfully launched two new products at Print4All 2018: the FVG POS 100 sensor positioner and the ekr 500 digital Unit Touch controller, which feature a completely new commander for web guiding. Both are based on existing BST eltromat products that have already proven themselves in the field and are used by customers around the world. As clearly reflected in the new product features, BST eltromat has once again raised its already high standards for easy commissioning, intuitive operation and reliability. The visitors at the booth in Hall 18 were enthusiastic about the new systems. At Print4All, BST eltromat presented an extensive range of products for quality assurance in web processing. The company focused on web guiding, 100% inspection, register control, web monitoring, color measurement and management, workflow, as well as measurement of thickness and basis weight.

“The expanded focus of Print4All provided our company with a good setting for the market launch of the FVG POS 100 and the ekr 500 digital Unit Touch. The visitors’ feedback in response to our range – and especially the new products – was very positive,” says Paolo Tamburrini, Managing Director of BST eltromat Italia, summarising his company’s successful exhibition at Print4All. “Many customers tried to operate the controller themselves and they were surprised about the easy use of the ekr 500 digital Unit Touch. Our employees also demonstrated how easy it is to operate the new sensor positioner and integrate it into machines.”

The FVG POS 100 moves motor-driven sensors to the web edges and positions the webs using the measurement results provided by the sensors. Ingo Ellerbrock, Head of Product Management at BST eltromat, explains: “We developed the new sensor positioner FVG POS 100 primarily for wide webs. It basically operates like a wide array sensor.” This sensor positioner has been designed for web edge and web center-line guiding in applications with frequently changing web widths. It is also an ideal solution for web guiding systems already installed in the machine and are difficult to access, or if a high degree of automation is needed. Examples include blown film extrusion machines or flexographic and gravure printing machines. When the job is finished, the FVG POS 100 automatically moves the sensors back to the starting position. Its modular design allows a flexible configuration for a variety of applications. Like the web edge sensors it is based on the plug and play principle.

The ekr 500 digital Unit Touch consists of a controller and a commander to operate the guiding device. Due to its state-of-the-art offers, BST eltromat has made the product even more user-friendly. It uses the operating concept tried and tested by customers around the world, but now has additional features, such as operation via flexible touchscreen. This option supports machine operators wherever it is helpful to have a touchscreen. With the touchscreen, for example, it is now easier than ever to switch between different views, e.g. web width, status messages or offset setting for the web position. The commander can be positioned separately to the controller or it can be used as a second control unit in addition to an existing commander.

The new controller is also a plug and play device: as soon as it is plugged in, it automatically identifies the installed sensors, e.g. either ultrasonic or infrared sensors. Commissioning requires neither registration nor configuration. “The new equipment is easy to operate and commission, resulting in a unique selling proposition,” says Ellerbrock, highlighting the benefits of the new sensor positioner and controller.

And the ekr 500 digital Unit Touch commander is 100% backward compatible. BST eltromat customers can thus easily replace their existing commanders from former controllers by the new ekr commander with the flexible touchscreen, and take advantage of the new technology. This means that BST eltromat offers investment security, while at the same time being able to switch to the latest technology. 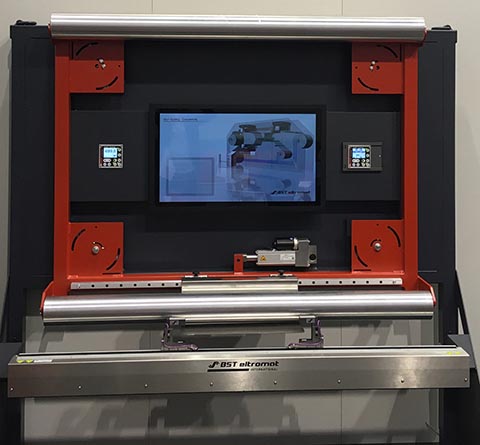 The new FVG POS 100 sensor positioner from BST eltromat is designed for wide webs and is suitable for applications such as blown film extrusion or flexographic and gravure printing, in which web widths often change.