With the newest release of its automated image optimization and processing software, software manufacturer OneVision has expanded the potential uses of its product range. As well as traditional publishers in the newspaper and magazine industries, catalog and photobook printers, web shops and internet portals can now effect high-quality image processing within seconds.

Regensburg – The latest release, version 18.1, marks an expansion in the range of use cases for Amendo, the image optimization software from the German manufacturer of automated software products. New features, such as an increased choice of image scaling options, automatic artifact reduction and filtering and separate editing of graphics now not only enable publishers and media companies to benefit from a high level of automation, image optimization and image processing but also catalog, photo book printers as well as internet portals and web shops.

While the focus so far had been on automated optimization of “natural” images such as landscapes, animals, group photos, portraits and other snapshots, Amendo now also recognizes graphics as “artificial” images, encompassing logos, comics, technical drawings, as well as images with highly limited color palettes in general. Product images, which are typically shot in front of a white background – also fall within this category. Amendo can identify these images, making appropriate use of other optimizations at the same time, adapting the brightness optimization of these images to ensure that the colors of the products depicted in the images are reproduced realistically.

Online retailers will further benefit from the “Generate Image Path” module, with the ability to automatically add clipping paths around recognized objects.

Three new options complete the image scaling portfolio: users can resize images based on resolution, number of pixel and dimensions, or any combination of these parameters, while two different interpolation methods are available to choose from. As such, Amendo 18.1 now offers what is probably the most universal image scaling product on the market, while for users, this functionality remains as intuitive as ever.
With Amendo 18.1 images can be scaled automatically to suit your requirements 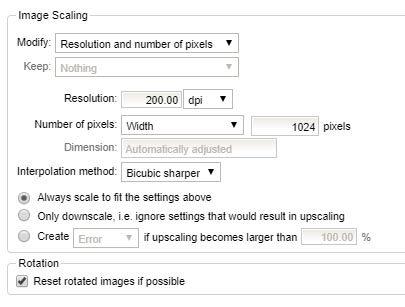 Images can be scaled automatically to suit your requirements.

Amendo’s flexibility is also demonstrated in the range of file formats that it supports: Amendo can not only process image formats such as JPEG, TIFF and PNG, but also images within PDF files and, with version 18.1, Amendo becomes the first automatic image optimization software to support PDF 2.0.

„Finally, the new release not only increases the range of use cases, but also the quality of automatic image enhancement. Images that have been saved as JPEGs using a high compression (in other words, lower quality) include so-called artifacts, such as the appearance of small block patterns within the image. Amendo 18.1 reduces these artifacts and thereby improves image output quality significantly.

The new Amendo 18.1 version is now available as a free download to users with maintenance contracts, while the next Amendo workshop takes place on 7 November 2018.