Binder + Wöhrle Is Modernizing its Production with CIJ Printers from Leibinger

Tuttlingen, Germany – Binder + Wöhrle is convinced that inevitably, the time comes for even the most tried and tested technology to retire. The manufacturer of plastic pipes, profiles, and Bowden cables, which are used in cars from VW among others, has said goodbye to its old hot stamping machines for product marking. CIJ printers from Paul Leibinger GmbH & Co. KG are now being used instead. They are more flexible, faster and do not directly touch the products.

Are you familiar with Bowden cables? Maybe not by name. But if you ride a bicycle, then you are making use of the cables that Englishman Ernest Monnigton (1859-1904) invented. They transmit tensile and compressive forces and are also used in motorcycle and car gas and clutch cables – in the seat adjustment and hood opening mechanisms. What very few people know is that one of the leading manufacturers of plastic pipes, profiles and Bowden cables is located in the Black Forest, in Hausach near Offenburg, Germany. The tranquil town with only 6,000 inhabitants is home to Binder + Wöhrle, easily recognizable from a distance with its white-red headquarters and more than 8,000 square meter production plant – in striking contrast to the green forests of the surrounding area. Over three shifts, 60 employees process more than 800 tons of wire per year. The company achieves a yearly turnover of over eight million euros and counts well-known companies such as VW among its customers.

The challenge: Hot stamping machines are reaching their limits

As one of the technology leaders in plastic pipes, profiles and Bowden cables, Binder + Wöhrle strives to be at the cutting edge of technology. And this is why old technologies regularly give way to state-of-the-art solutions: an example being the hot-stamping machines which were used for product marking. They did a dependable job for years, printing pre-heated embossed marks on plastic sheets that peeled off and stuck to the product as a typeface. The hot stamping machines could be operated economically – but only at a time when little data had to appear on products. “Today things are very different,” explains Klemens Isele, Managing Director of Binder + Wöhrle. “We are required by law to provide a variety of product data – including product number, material identification and production date.” The hot stamping machines, which made changing typefaces quite time-consuming, have reached the limits of their flexibility. And this is why Isele went in search of a cost-effective and flexible labeling system.

In order to find the right labeling system, Isele did not even have to leave Baden-Württemberg. In fact, he found the perfect solution not far from home. In neighboring Tuttlingen, there is another world leader, not in Bowden cables, but in industrial marking systems: the Paul Leibinger company, founded in 1948. It produces the JET3up, a printer that meets Binder + Wöhrle’s requirements to a T. Since information is not fixed as in the case of a hot stamping machine, but rather it can be changed within seconds – five-line small fonts, graphics, barcodes and all common data matrix codes with a print height of up to 16 millimeters included. 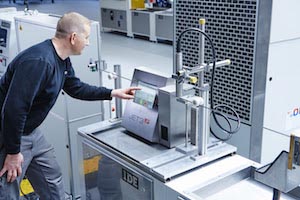 JET3up at work: When printing, two deflection electrodes come into play. They change the trajectory of individual drops, so that they land as a pixel on the product surface and dry within one second.

“With these printers, we are now able to label our products faster than ever and can implement product changes even more quickly,” says Isele. Information can be adjusted using a 10.4-inch touchscreen that is as easy to use as a smartphone. It’s the what-you-see-is-what-you-get (WYSIWYG) principle at work. The set information appears one-to-one on the product, all without nerve-wracking test runs.

Another advantage of the JET3up is that, unlike with the hot stamping machine, the printer does not actually touch the product. This allows quick marking, which is gentle on the product and reduces the risk of breakage. The secret of this non-contact marking is a technology called Continuous Inkjet (CIJ). It works within the cylindrical printhead, which looks directly at the product from above, and runs out of the extruder at a speed of around 200 meters per minute. In the printhead, which is connected to the hydraulics in the printer housing via an umbilical, 96,000 charged drops of ink per second shoot through a tiny nozzle in the direction of a collection pipe.

When printing, two deflection electrodes come into play. They change the trajectory of individual drops, so that they land as a pixel on the product surface and dry within one second. This is how, as if by magic, black and white markings appear on the products, and the remaining drops fly straight into the catcher tube and circulate in the system. “You have to see this printer technology with your own eyes to believe it,” raved Isele. “Seemingly out of nowhere the information appears on the Bowden cable. Quickly and without ever touching the product.”

The printers even have power reserves. They can keep up with speeds of up to 600 meters per minute – equivalent to 36 km/h. And it is always possible to increase line speeds without the marking systems causing a bottleneck. Thirteen printers are now being used at Binder + Wöhrle’s production facilities. Not only in the Bowden cable production, but also in the production of pipes and hoses – another one of the company’s business areas.

Isele is also impressed with the printers’ low operating costs. With a power consumption of about 30 watts, the devices use less power than a light bulb. The consumption of ink is equally low. With a liter of ink, the devices print 160 million characters – almost enough for the whole year. Moreover, maintenance and cleaning costs are low. Thanks to the automatic Sealtronic sealing system, which Leibinger developed itself, no elaborate cleaning is required before production start. “When the printer is out of service or in standby mode, the nozzle and catcher tube remain open on many CIJ printheads, which results in the ink drying and the nozzle becoming clogged, which makes a lot of cleaning work necessary to ensure that the restart does not lead to a diffuse spit of ink and an indistinct typeface,” explains Christina Leibinger, Managing Proprietor of Paul Leibinger GmbH and Co. KG. This isn’t the case with Sealtronic. “During production stops, the catcher tube moves to the nozzle and closes the system airtight. When restarting, the typeface is immediately clear and stable – without cleaning and rinsing cycles, production can begin again immediately.”

The outstanding reliability of the made-in-Germany printers was also an argument for opting for Leibinger when modernizing the company’s marking systems. “Printer reliability plays a key role for us,” says Isele. “If the labeling system fails for only a few minutes, several meters of valuable pipes and profiles become scrap.” And if a system does threaten to breakdown, technicians from Leibinger are just around the corner. “We are very satisfied with the technical service. If problems arise, we know that we won’t have to wait too long for help, and we can count on production being able to resume as fast as possible.” Isele is impressed: “Our slogan – “Precision and safety” – is reflected in the Leibinger printers.”