Wiltz, Luxembourg – UNITED CAPS, an international manufacturer of caps and closures, hosted an open house celebrating the opening of its extended R&D facility in Messia, France, on June 21st. Representatives from Nestlé joined in the celebration, which featured an innovative project undertaken to develop a brand-new closure for Nescafé Gold.

“We were thrilled with the turnout at this event,” said Benoit Henckes, CEO of UNITED CAPS. “It was truly a Golden Moment for our company and our customers. It also gave us a platform to share our experience in the development of a new closure for Nestlé, another Golden Moment worth celebrating. Our special thanks go to the representatives from Nestlé that joined us for this important event.”

About 50% of UNITED CAPS’ products are created through customer collaboration with the UNITED CAPS design labs to develop bespoke closures tuned to their specific requirements. In the case of the Nestlé project, the company was seeking a closure for its Nescafé Gold coffee that would support the high-quality image of Nescafé and stand out on the shelf. And they wanted it as quickly as possible. Nestlé was aiming for a classy brushed metal look for its new packaging. This required a 100% metallic material to be wrapped around the skirt of a closure, something that had never been done before.

During the project, which reached full production in just two years, UNITED CAPS overcame several challenges that were deemed to be impossible. “I want to commend the UNITED CAPS R&D team for its persistence in successfully delivering this outstanding solution,” Henckes added. “Many would have given up several times along the way. While the entire project took two years, the first prototypes were delivered in less than a year. And the folks in our Messia R&D centre also pitched in to reconfigure operations and make time and room for this important project.”

Henckes explains that people have moments in their lives that they look back on as golden. A seemingly impossible challenge conquered, a successful collaboration or maybe an event that touched them deeply. “Companies, too, have those Golden Moments,” he said. “The Nescafe collaboration was a Golden Moment for UNITED CAPS. We faced significant challenges, but undaunted, we created, we invented and even crossed new technical boundaries to scale new peaks. This effort reflected the essence of our Relate-Perform-Sustain model that helps us bring to market differentiated packaging solutions.”

In order to continue to provide the level of service UNITED CAPS customers have come to expect, and to maintain the 50/50 split between standard and bespoke product development, UNITED CAPS has extended its R&D centre located in Messia, France. With the addition of 200 square meters of floor space, an increase of 30%, the facility now is comprised of 600 square meters. This was accompanied by a 30% increase in staffing, the addition of a 3D printer for fast prototyping, and a restructuring of the R&D organisation to be more responsive to market needs. The end result is an average decrease in development time of 10% to 20%, a significant value to UNITED CAPS customers who are always looking to reduce product development cycle time. 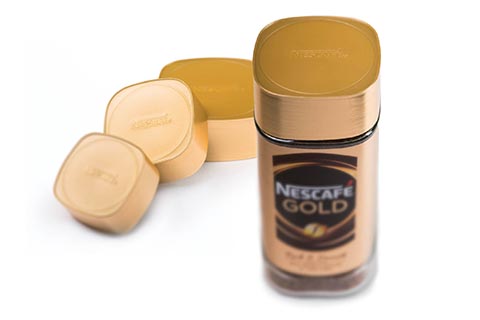