Oosterhout – The Finnish-based printing concern Kaleva Oy is to join forces with Q.I. Press Controls (QIPC), the Dutch specialist in measurement and control systems for the printing industry. The biggest newspaper concern in the north of Finland is to invest in the IDS-3D system for automatic colour and register control on its manroland COLORMAN Autoprint press. Kaleva Oy has great expectations of the dampening control and smart presetting functions.

Fact-finding mission
This is the first time that Kaleva Oy has partnered QIPC, even though the first contact between the two companies dates back to 2011. It was the functionalities offered by the IDS-3D system, on top of some excellent references from other QIPC users (including Alma Manu from Tampere), that eventually won them over. “Our fact-finding visits provided the best proof that the system worked as promised,” Juho Rankinen, technical director at Kaleva Oy, providing some background on the new partnership. Erwin van Rossem, head of sales at QIPC, supervised the project. “A fact-finding mission can provide so much more information,” he says. “Kaleva Oy were able to ask other users how the system works exactly and find out whether it was a viable option for themselves.”

More efficient use of ink
This proved to be the case. The plant is especially keen to save on waste and have the press made future-proof. “We were also looking for a system that was able to maintain the same high standards of print quality,” Juho Rankinen reports. By using the ink more efficiently, it’s possible to keep the print cylinders and the press cleaner for longer periods. Juho Rankinen: “This means our operators have more time to concentrate on other activities. They can maintain the press in a better condition and work in a less routine manner.”

Innovation-led
A total of eight IDS-3D cameras are being fitted on the manroland COLORMAN Autoprint press and will be fully operational by the middle of 2018. Juho Rankinen is upbeat: “This system fits in with our own drive for innovation. We are constantly seeking out new automation-related developments. Whenever we can identify the added value a system is likely to give us, as is the case here, we are more than eager to invest in it.” QIPC looks upon the new partnership as a major compliment for the products it produces. “Our market share is growing,” explains Erwin van Rossem. “This is our fourth closed-loop colour control system in the country so far.
The fact that their partner and fellow Finnish-based company Alma Manu was so positive about our systems was a feather in our cap.” 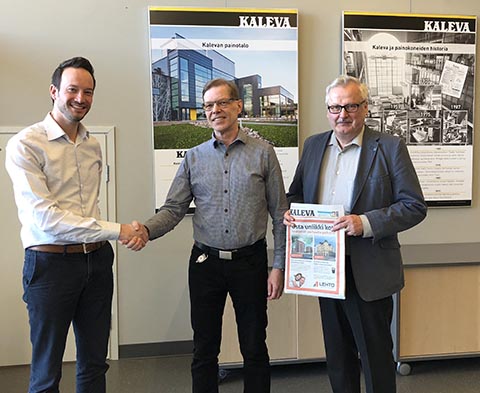