The space-efficient N6 is ideal for material handling operations

Tokyo, Japan – In May, Seiko Epson Corporation ("Epson") will begin a global roll-out*1 of the N6 compact 6-axis (vertically articulated) industrial robot the company announced in November 2017. Epson will also release the SH250LH, a new force sensor with a hollow design. 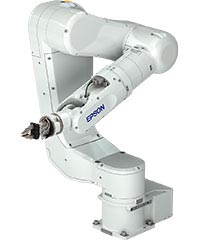 Epson's N series of compact 6-axis robots perform tasks in tight spaces more efficiently than other robots because of a uniquely engineered "folding" arm. The N6 has a longer arm (1,000 mm) and can handle higher payloads (6 kg) than Epson's previously released N2. The N6 is ideal for loading/unloading small electronic products and automotive parts into/from test equipment. It is also perfect for shelving/unshelving medical products and much more. It has a smaller installation footprint than earlier 6-axis robots and can reach a wider range of places, from the top shelf to the bottom. These features increase productivity and the efficiency with which factory space is used.

1. The unique arm structure and arm length give the N6 a small installation footprint while allowing it to reach high places.

Taking advantage of the N series' folding arm design and a long (1,000 mm) arm, the N6 can access locations that are higher than those that can be reached by the N2 and by Epson's 900-mm class 6-axis robots (the C4L and C8L). Users can exploit these features by laying out factory shelves and equipment vertically instead of horizontally to enable the N6 to use previously wasted vertical space.

Even with an arm length of 1,000 mm, the N6 can reach objects at the same height as the C8XL, Epson's 1,400-mm class 6-axis robot. Moreover, because the N6 can be installed closer to shelves and equipment than a 1,400-mm arm, the installation space can be reduced*2 by about 75%. In addition to installing the N6 in narrow spaces and inside equipment where robots previously would not fit, users have the freedom to consider more compact factory layouts.

Like the arm, the optional new SH250LH force sensor also employs a hollow design, so cables and hoses can be neatly routed through the sensor as well as the arm.

*1 Contact your local Epson sales company for the launch date in your region.
*2 Per comparative tests conducted by Epson based on assumed use. Actual installation space may differ depending on the customer's installation environment.