The new iC3D Real-Time Ray Tracer can be found at:

Visitors to the booths are invited to bring their own AI or PDF files to try out the dynamic capabilities on original artwork first-hand.

The Real-Time Ray Tracer will shortly be available as a free, automatic upgrade (version 5.2), for users with an iC3D software maintenance agreement (SMA) and builds on key rendering advancements and distributed rendering capabilities enabled in the current iC3D version 5.1 release. The technology works on almost any off-the-shelf Mac or PC in conjunction with an appropriate NVidia or AMD Graphics card. Alternatively, Real-Time Ray Tracer performance can also be achieved on older computers using commonly available external graphics card (eGPU) to extend graphics capability.

Using the new iC3D Real-Time Ray Tracer technology, high-resolution design renders can now be delivered at unprecedented speeds. For example, a high-quality (1024 pxi) ray-traced image, 6000 x3500 pixels in size, which would previously have taken 3-4 hours to render, can now be achieved to photorealistic quality in 1 minute, 49 seconds using an off-the-shelf PC with Nvidia 1080 Ti graphics card.

“This breakthrough means that users can interact dynamically with their 3D virtual packaging designs without compromise to quality as they work. Changes can be made to photographic-quality artwork, geometry, materials and lighting without any time-lag in updating the scene,” explains Nick Gilmore, CEO of Creative Edge Software. “Where a group of renders required urgently might previously have taken several hours to complete, they can now be completed in just a matter of minutes. The iC3D Real-Time Ray Tracer has the potential not simply to streamline processes but to completely revolutionize your whole design operation.”

The technology behind iC3D Real-Time Ray Tracer
Traditionally, fast rendering of 3D visuals – for example, for gaming – has been achieved using OpenGL, a technology which creates appropriate levels of light, darkness, and color within an image but does not have the ability to render scenes photographically. This is especially noticeable when the scene contains materials such as glass and liquids. To achieve photographic renders, packaging professionals and brand owners have relied on ray tracing, the current drawback being speed.

Creative Edge Software was the first company to deliver full ray tracing capabilities to all levels of packaging creatives with the launch of iC3D v4.0 in May 2016. By integrating ray tracing technology into the iC3D all-in-one package, creatives and brand owners were able to achieve photorealistic design mockups at any stage without the need for specialist programs or third-party services.

With the development of the iC3D Real-Time Ray Tracer, Creative Edge Software has succeeded in combining the speed benefits of OpenGL technology, but using Ray Tracing to enable simultaneous photographic rendering of changes as they are made. This new capability has the potential to replace previous methods for achieving high-speed ray traced renders, such as via a render farm whereby the processing is shared between a group of top-specification computers. 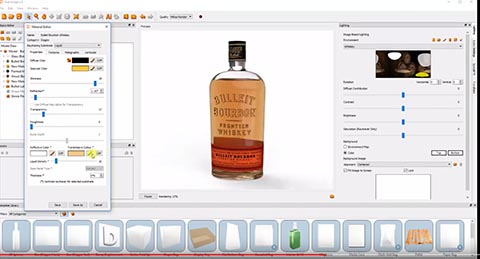