Georgensgmünd – TroFilms GmbH, based in Georgensgmünd in central Franconia, can look back on a very successful trade fair participation as an exhibitor at LUXE PACK Shanghai. Together with the Chinese partner Leading Technologies Co., Ltd. (LEADINGTECH) and the company WEILBURGER Graphics GmbH, an internationally renowned manufacturer of varnishes, flexo-inks and adhesives for the graphics industry from the Franconian town Gerhardshofen, TroFilms GmbH attended for the fourth time this year in China. The well-attended LUXE PACK Shanghai, which took place at the Shanghai Exhibition Center this year from 11 to 12 April, once again proved to be an excellent choice for talking to Asian printing companies, refiners, agencies and branded companies and for planning joint projects. At the two-day show, TroFilms presented its well-known and established film products, including TroPROTECT®, a scratch-resistant matt film and TroTEMPTATION®, a scratch and abrasion-reduced matt film with a special haptic effect; both are available for three different application methods (wet laminating, thermal laminating and thermal laminating for digital printing). Furthermore, the company presented its TroPURELINE® films with different structural effects as well as the newly developed TroPROTECT®-X excimer matt films, which are highly scratch-resistant with a gloss level of just 4.5 gloss points and are already available worldwide in three application variants: wet laminating, thermal laminating and thermal laminating for digital printing. Moreover, the company gave selected visitors an exclusive insight into current film developments that are in the final test phase and which the company will bring to market this spring. According to Ralf Troyer, these are "ground breaking new developments, through which the company wants to raise the laminating film market to the next level of quality." Examples include the new TroTEMPTATION®-X excimer film with a soft, velvety surface, new metallized BOPP matt film grades from the TroPROTECT®-X and TroTEMPTATION®-X grades, and laminating films based on a completely new manufacturing process that the company will be launching soon.

Ralf Troyer, Managing Director of the Middle Franconian film specialist summarized their Chinese fair presence: "We not only brought home special impressions and a lot of highly interesting contacts from this year's LUXE PACK Shanghai, but also a wealth of new ideas for future products that are immensely valuable for a highly innovative company like TroFilms GmbH. Of course, knowing and getting to know this Asian market with all its special requirements and completely individual rules and standards in such an intensity is only possible with a local and highly-versed partner. We are very pleased to have found such a successful and intensive cooperation with William Huang and his team at LEADINGTECH as a well-known regional distribution partner."

Nicole Schwörer, Authorized General Manager of TroFilms GmbH, who was also on-site, added: "As an international company, from our point of view it is a must to grasp the special flair of Asian trade fairs with our own senses and to be able to experience and get to know the perceptible differences both in the interpersonal and in the business area every year. The effort and costs of such a trade fair presence in China are surpassed many times by the important learnings and positive contacts that can be made and maintained. We are sure that this will be reflected again in unique product developments and special film solutions for our worldwide customers." 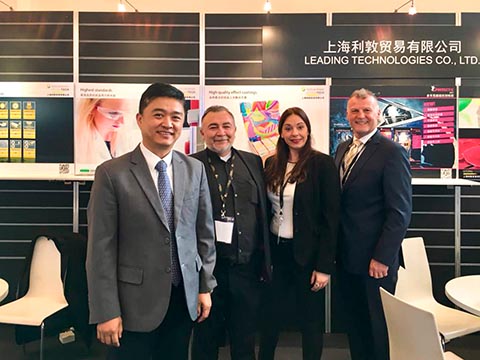