Showcard Print, a specialist in the supply of printed POS and POP to the retail sector and to major brands, has invested in an Onset X3 platform from Fujifilm. This ultra-high productivity platform now features a new Inca Digital robotics system to boost its work rate still further.

With a 40-year heritage in the wide format sector, Showcard Print operates a range of wide format digital, screen and litho services producing high quality POS materials for some of the best-known retail brands on the market.

“We’re looking to the future,” says Showcard Print Managing Director, Mark Smith. “Over the next few months we’re investing £3 million in growing the business and the Onset X3 is obviously a very significant part of our plans. We’ve been Fujifilm and Inca Digital customers for some time, buying litho plates and screen inks from Fujifilm and running both an Inca Digital Onset S50 and an Onset S70 for a number of years. As the Onset S70 is reaching the end of its life we needed to find a replacement. We spent a year testing a variety of machines across the market and ultimately the Onset X3 proved itself to be the best machine for us for a number of reasons.

“Customer expectations of quality are increasing and, as far as we’re concerned, the Onset X3 is as good as it gets in that regard. When you then consider the new robotic automation system Inca now provides with the machine, the already impressive productivity has gone up yet another level. We’re obviously very familiar with the combination of Fujifilm and Inca Digital technology that has built the Onset range and we’re delighted that we’ll now be able to put the machine that sits at the very top of the market to work, creating exceptional products for our customers.”

Says Chris Broadhurst, General Manager, Fujifilm Graphic Systems UK: “Fujifilm and Showcard Print have enjoyed a very successful partnership for some time now, which this new investment promises to build on. The Onset X3 is a machine at the very top of its class, so we’re delighted that they have selected it as a key part of their ambitious future plans.”

The Onset X3 with new robotics and also featuring Uvijet LM, a new low migration ink for indirect food packaging, will be on display at FESPA Global Print Expo 2018 (Berlin, May 15th-18th) as part of the Digital Corrugated Experience (Stand 5.2-C30). 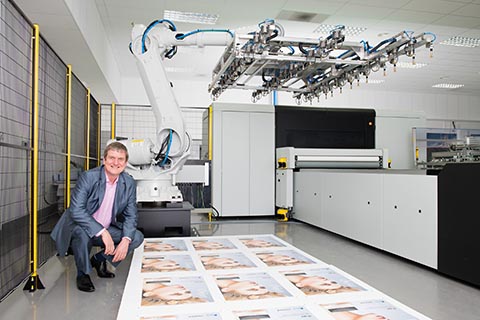