Partners Dave Simons and Dan Wolfe opened the company in 1990. Twenty eight years later, it is a leading hospitality printer in the cutthroat central Florida marketplace and employs 65 people. If you have visited any of the SeaWorld parks in Orlando, San Diego and San Antonio, Busch Gardens in Tampa and Virginia, or Sesame Place, the children’s theme park near Philadelphia, you’ve seen their work.

“The Orlando market is very competitive and we are fortunate to have a few clients that have been loyal to us for 28 years. It’s a nice base of customers to have,” said Simons, the company’s President. “So much business today is done on price only but our larger clients are very conscious of color. They want us to be able to match and achieve color consistency, and they are more concerned with their image and other issues. It allows us to do what’s right for them.”

That includes the equipment side of the business. Simons says it’s important to have the right mix to give customers what they need with high quality printing. Noting he has a history with Polar cutting systems, last month’s acquisition was the first time Simons worked with Colter & Peterson, North America’s largest independent distributor of paper cutters and paper handling equipment.

“Our bindery manager read an article about Colter & Peterson equipment. Tim Fischer already had a relationship with them and he handled negotiations to buy the system,” he mentioned about Sandy Alexander’s Executive Vice President and CFO. “We put a whole package together with the paper cutter, a pre-loading cutting transportation system and a jogger with an air removal roller to provide a smooth surface. It’s been running well and cuts up a storm.”

Plenty of work goes out the door every day at the 40,000 square-foot facility located east of and not far from the Universal Orlando property. Digital jobs continue to grow and account for about 25 percent, and wide format is primed for future growth with additional Sandy Alexander backing.

That means offset still dominates and the work is run on three, 40-inch presses; six- and five-color Komori Lithrones and a six-color Mitsubishi, all with coating systems. An older 36-inch Polar cutter handles the pre-cut and the 45-inch system serves as the primary unit for finishing. All the machines run two shifts, five days a week.

Known for its flexibility and a faster than average back gauge, Simons believes his Polar system is the perfect complement for the variety of work they do.

“As the national print supplier for SeaWorld, Busch Gardens and Sesame Place, which includes everything from their brochures and park maps to the marketing pieces and in-house stationary, Designers’ Press still has large runs but many clients have redefined their orders and have switched to smaller runs these days. That has increased our digital business, but all of the work still needs to get trimmed.

“Normally we are cutting anywhere from three to five inches of material, skid after skid after skid. That’s where the reliability factor kicks in. We run million-plus size jobs and the smaller orders. The Polar system is cutting work all the time and getting the job done.” 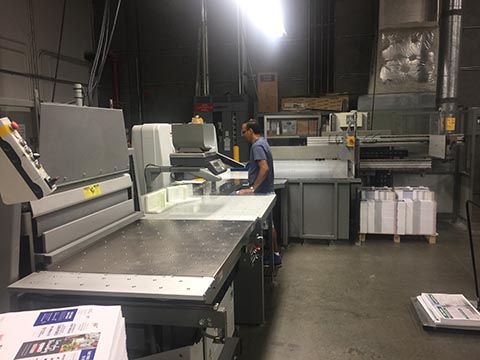