GPO Completes Digitizing All Issues of the Federal Register

The complete Federal Register from 1936 to the present is now available digitally on GPO’s govinfo. https://www.govinfo.gov/app/collection/FR.

Some highlights from the early issues of the Federal Register:

“This is an important achievement for GPO and OFR in providing the public digital access to all Federal Register issues from the Administrations of Presidents Franklin D. Roosevelt to Donald J. Trump,” said Acting GPO Deputy Director Andy Sherman. “The public will now be able to access these regulations on smartphones, tablets, laptops, and personal computers. I congratulate GPO and OFR employees who made this project a success.”

“We are proud to announce the completion of a long-awaited goal - digitization of the entire set of Federal Registers that were not "born digitally" before 1994. With the release of the final set of books, GPO and the OFR have made a great leap in providing public access to an important collection of 20th Century Federal Government documents,” said OFR Director Oliver Potts.

The first issue of the Federal Register came off GPO presses on March 14, 1936. President Franklin D. Roosevelt issued the first document, an Executive Order, to be published. The Federal Register is the official daily publication for rules, proposed rules, and notices of Federal agencies and organizations, as well as Executive Orders and other presidential documents. It is updated daily by 6 a.m. and is published Monday through Friday, except Federal holidays, in both digital and print editions. 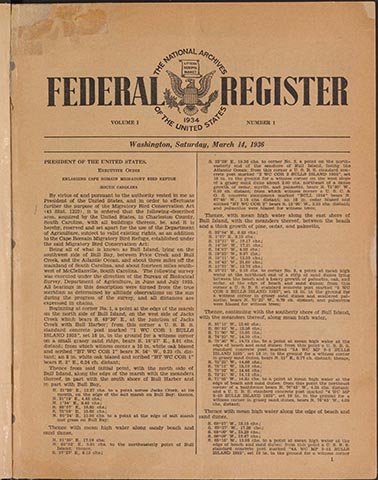