Mohawk Celebrates Launch of Xanita Board at Global Shop 2018

Mohawk Fine Papers has partnered with Xanita
to bring Xanita board to the North American Market.

Cohoes, N.Y. –Mohawk, North America’s largest privately-owned manufacturer of fine papers, envelopes and specialty materials for printing, announces a strategic partnership to bring Xanita board to the North American market. Xanita is the maker of industry-leading sustainable fiberboard, designed for flatbed ink jet printing in the creation of structural displays. This is the latest addition to Mohawk’s expanding portfolio of innovative substrates for digital print and design.

The partnership will see Mohawk taking the position of master distributor for Xanita board in the North American region. Mohawk will offer the full range of Xanita products and have stock available by the end of March 2018.

“The U.S. is by far the biggest market in our category, and we’re thrilled to have a partner like Mohawk to help maximize our position in the market,” states James Beattie, CEO Xanita.

“In Xanita, we have found a partner who shares common values with Mohawk with a clear commitment to product innovation, design excellence and environmental sustainability,” states Paul Biesiadecki, CSO Mohawk.

Between March 27-29th 2018, Mohawk will be celebrating their new partnership at Global Shop 2018 in Chicago, with a new 20’ booth constructed entirely of Xanita board. Senior leadership from both companies will be on hand at booth #3318 to answer any questions about this innovative, sustainable new product.

Xanita board strikes the perfect balance between premium quality and eco-friendliness, its versatility ensures that there will almost always be a Xanita solution for most projects.

To find out more about Xanita board in the U.S. or to place your order got to: xanita.com/usa or email [email protected]. 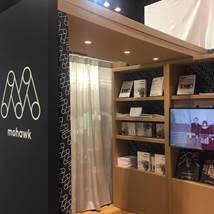 Mohawk’s 20-foot booth at Global Shop 2018 is constructed entirely of Xanita board.